Fine Gael reacts to ‘car crash’ Maria Bailey interview: ‘I think she did herself a disservice this morning’. (Journal)

TD Maria Bailey defended taking a claim against a hotel after falling off a swing. 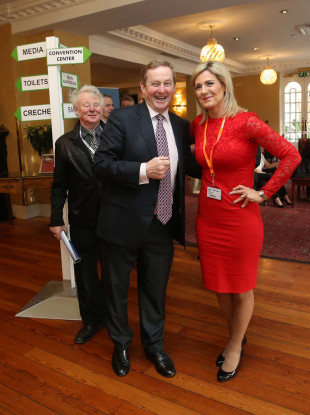 HEALTH MINISTER SIMON Harris has said the interview with Fine Gael TD Maria Bailey about her insurance claim case against a hotel was “unfortunate”.

Fine Gael sources said party HQ was not made aware that Bailey would be on the programme, and said it was “discourteous” of RTÉ not to inform them that Bailey was due to be on the radio show ahead Social Protection Minister Regina Doherty.

Speaking to reporters at the RDS, Harris said it would have been appropriate for Bailey to meet with the Taoiseach before taking to the airwaves this morning on RTÉ’s Sean O’Rourke programme.

“I think that is regrettable that didn’t happen in advance of the interview, I think that would have been an important that he was afforded the opportunity to have that meeting with Maria, she obviously made the decision to go on radio this morning,” said Harris.

“My understanding is that is a decision she made of her own volition, as is her right. I think it would have been better if she had the meeting with the Taoiseach first.”

When asked about the interview, the health minister said:

“I think it was an unfortunate interview. I think when you withdraw a claim I think it is in and of itself an acknowledgement of the fact that perhaps that claim shouldn’t have proceeded, yet the interview seems to be very much in the space of blaming lots of other people.”

Speaking on the radio, Bailey said the media “has crossed the line of public invasion and humanity” in the controversy over her now-dropped personal injury claim against a Dublin hotel.

The Dún Laoghaire TD drew criticism last week after it emerged that she had filed legal proceedings against the Dean Hotel after she fell from a swing at the venue.

The hotel denies any negligence.

Bailey had claimed she suffered injuries to her head, lower back and hip in the alleged incident.

In an interview with RTÉ’s Sean O’Rourke this morning, Bailey defended her claim and said she was “genuinely hurt” by the fall.

Bailey was strongly critical of the media for its coverage of the story, saying it acted as “judge, jury and executioner” in the case.

“Due to the unbelievable abuse, I wasn’t able to go home for three days last week because journalists were sitting at my home. That is an invasion of my privacy and humanity has been crossed,” Bailey said.

“This has obviously been a very stressful time, I can imagine on a personal level for Maria for her family, I don’t wish to say anything to add to that,” added Harris.

“I think members up and down the country would have appreciated if it [the insurance claim] was going to be withdrawn that it happened before the local and European elections and not after. I think perhaps had that situation happened the situation could have been more effectively dealt with.”

Some Fine Gael members have reacted to the interview, stating that they are in disbelief as to why Bailey thought it would be a good move to go on the radio programme.

They added that it was a complete “solo run” by the TD to take to the radio, describing it as a “car crash” interview.

Another Fine Gael TD said the interview shows a serious lack of judgement on the part of Bailey. They said they have a lot of empathy for her, “probably more than anyone else in the party”, but said going on the radio programme was a “rookie mistake” that an experienced politician wouldn’t make.

“My heart goes out to her… I feel very upset about it… I don’t think she did it intentionally, but she has caused huge damage to the party,” they added.

Party sources said they heard about the interview just like everyone else when she was live on air. It is understood that she was advised not to do any media interviews about the case.

Speaking to Sean O’Rourke, Doherty said it’s a “pity” Bailey did the interview as part of a “series of judgement errors in my opinion”.

“I think she did herself a disservice this morning,” she said.

A number of TDs have said the case definitely had an impact on the Fine Gael local election result, with one TD stating that it could have lost about 100 votes or more per candidate, which affected those candidates who are on the edge of getting elected.

During the interview, Bailey was asked about the specifics of her fall, which occurred before she was elected as a TD in 2016.

“We purchased a drink each at the bar, which we didn’t consume,” she said.

We went up in the lift, we saw the swings. Nobody was drunk, nobody was messing. They’re like polished woods these seats, I sat in them, I did have a bottle of beer in my hand and next I knew I was on the floor.

“I had my beer in my hand and I was reaching for my friend, who had a bottle of wine, she was taking her camera out of her jacket. I then found myself on the floor, I was mortified,” she added.

Bailey was specifically asked whether she had things in both hands when she fell off the swing. The TD responded that this was not for her to answer.

Above is the article that has shocked the country.  Simon Harris is out of his depth in health but at least the man has a sense of common decency unlike others in Fine Gael.  Maria Bailey should step down now with immediate effect; she should run.  This woman went to a hotel with friends.  They were have a party.  She is not a child but she decided to go on the swing and in her own words, in an interview, she said she had a glass of wine in one hand and with the other hand she was reaching out to a friend who was giving her the bottle of wine.  Now, this alone ends this farce and Ms Bailey has destroyed herself through her Ignorance, Sense of Entitlement and Sheer Arrogance.  We live in an era of insurance fraud and scams, with the Judiciary awarding up to 3 times more than in other jurisdictions.

Politicians are supposed to lead by example.  Ms Bailey has showed us how low the calibre and integrity that is now enshrined in this Fine Gael party.  It shows how detached FG are from reality, not just in Health, Housing, and Poverty – O yes, that word Poverty, let us not forget over 120,000 children in Ireland are reported as going to bed hungry.  Now we have the Bailey affair and she this morning came on RTE radio without even informing the FG press office and portrayed herself as a victim of the Irish people and media.  She went so far as to say how dare the Irish morons that voted her in questioned her about her claim against a hotel that is just trying to stay afloat in the current market.  Maria Bailey today has let down Irish feminism and if she claims that she is an advocate for same, well then God help this country.  The people now of Dun Laoghaire need to stand up and stop playing parish politics and give her the answer GO NOW if there is a snap election.

Maria Bailey, she has previous claims of personal injuries.

The TD did not respond to queries from The Sunday Times last week about a personal injuries action filed in the name of Maria Bailey against Aer Lingus, her former employer, in 2004.

The case did not go to court and was either settled or withdrawn. Aer Lingus declined to comment.

Ms Bailey claimed she was severely injured yet she must have had a visit from Padre Pio because she ran a Marathon of 10 kilometers.  This woman not alone has brought shame onto her own name but she also shows the calibre and lack of ethics within the party she represents.  Above in the first paragraph she is in a photo with Dame Edna, as many know around Ireland, loves to cross dress at parties – yes the wig in hand.  It is hard to believe that this ignorant Maria could have the neck to go on national radio this morning and play the Victim.  People are shocked throughout the country and again I will repeat that Fine Gael have a number of TD’s who should be exposed for their dark secrets and other hidden shadows.  We can’t forget Michelle Mulherin and the phone calls to an African country (personal) being rewarded with a seat in the Senate by Dame Edna from Mayo too, after losing her Dail seat.  This week I will write about the other FG TD’s and sex abuse; false expenses; and believe me so much more!

WHERE IS FIANNA FAIL?  WHERE IS MICHEAL MARTIN?  WHERE ARE THE FIANNA FAIL BACKBENCHERS – THEY NEED A CHANGE OF LEADERSHIP URGENTLY.