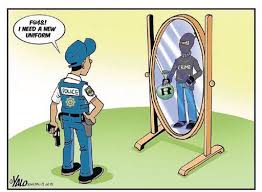 At the moment, there has been contact from An Gardai Siochana, which for legal reasons one will not comment on.  The above image is quite justified in the current climate.  Let us not forget that last week a Supt, an Inspector and a Detective Garda were all arrested on the one day.  Reading the Sunday Times at the weekend (John Mooney), it was indeed an eye opener.  John’s article put it to readers fair and square that the Inspector, who was only recently promoted was snorting cocaine on the bar counter while having a pint.  If one doubts Fred – just get a copy of the Sunday Times.  Well done John Mooney.

Now I ask the people out there today, the people who have been victims of Garda Abuse of Power, Garda Harassment, and Garda Stitch-ups, to please clarify something for me.  I know the answer already – not to sound arrogant – but rather I would like sound people to endorse it.

When you are asked down to a Garda station by appointment to make a statement, when a Garda you never even thought existed sends you a registered letter to attend the same station by appointment, and when you phone before going to the station and you are told by Garda Mildew that it is just a statement – routine – we need both sides of this dispute – Yes – I am back again to the Romanian and the American GI (who has left her since) and the Gardai who colluded in trying to create a criminal charge which never existed.  It was a Monday morning 10.30 am, cold and wet, when KT arrived at the station.  He was taken into a room and at least 9 to a dozen Gardai were there, all smiling, handcuffed, pushed out a back door and placed into a squad car with lights blazing and brought to Irishtown Garda station where he was placed in a store room, stripped naked and laughed at.  This is Sexual Abuse also and certainly Abuse of Power.

I will conclude for the moment by asking the question BY APPOINTMENT IN THIS CASE WAS NOT THE RULE OF NORMAL DUE PROCESS; IT WAS ORCHESTRATED; IT WAS PLANNED AND IT WAS TO DEMEAN A PERSON TO BE SUB-HUMAN.  THIS CASE IS GAINING MOMENTUM AND CERTAIN GARDAI WHO WERE PART AND ARE STILL IN UNIFORM, IN THE NAME OF THIS STATE, ARE UNFIT TO BE MEMBERS OF ANY POLICE FORCE.