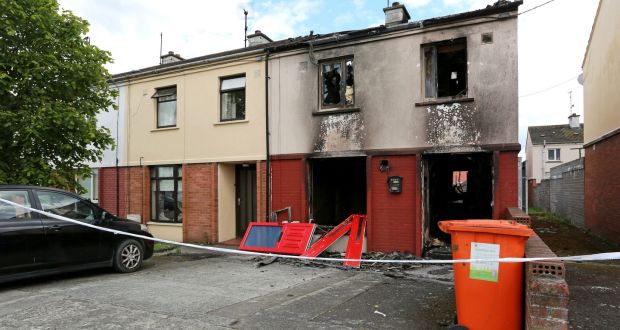 One of the houses petrol-bombed in relation to the Drogheda feud. Photograph: Crispin Rodwell

More than €650,000 worth of damage has been caused to 21 local authority homes in Drogheda due to an ongoing feud in the area, Louth county council has confirmed.

The figure reveals the extent of the damage caused by an ongoing feud in Drogheda which has included numerous petrol bomb attacks on family homes.

It was previously believed that fewer than 10 homes had been affected by the attacks, which have intensified in the last two months.

Along with the 21 local authority homes, at least one privately-owned home is also believed to have been severely damaged in the feud.

The feud began with the shooting of local criminal Owen Maguire (23) on Cement Road in Drogheda last July.

Mr Maguire was hit six times but survived and his associates blamed another local gang. Councillors in the area have claimed that extended relatives and friends of those involved in gangs have been targeted. Those with no connection to the gangs have also had their homes attacked.

At least 25 additional gardaí were drafted in to police the region due to the resurgence of violence. Other violent incidents have also occurred, including the shooting of a man in his 20s in June and the shooting of a 36 year-old man in April.

A spokesman for Louth county council said the figure of €650,000 was excluding VAT. He said repairs had commenced on some of the properties damaged by the feud. He said there were no concerns for the safety of council staff or contractors carrying out the repair work.

Joanna Byrne, a Sinn Féin councillor for Drogheda, said many of the families who had their homes damaged were living in emergency accommodation. She said their former neighbours lived in “constant fear” of more attacks.

“People are going to sleep with one eye open,” she said. “They just aren’t settled anymore, it’s shameful and it’s ripping the community apart.”

Ms Byrne said the additional gardaí were welcome but said she was concerned they may not all be experienced in dealing with the level of violence in the area. She said she was also concerned that displaced families would remain out of their homes for an extended period because the council’s repair budget was stretched thin.

“The ramifications of these attacks will continue long after they were committed and the families will have to deal with the consequences of a fight they had nothing to do with,” she added.

Mayor Paul Bell, a Labour councillor, said he was very concerned at the cost of the damage and the council’s ability to pay for it. “The funds just aren’t there right now.”

The Garda press office did not respond to queries about how many times the force has responded to petrol bomb attacks in the Drogheda area in recent months.

Fred says:-  The Government and the council should go in urgently and ensure that these properties are returned to their original state, fit for people to resume residence in their homes otherwise they will become ghettos and no go areas.  Have the Government and Gardai learned anything from Limerick and the feuds that destroyed lives there?  It is unimaginable to witness houses being burnt out when we live with a homeless crisis not just in Dublin (10,000+ families) across the country.  If one senior Garda last week stated that the Kinahan Hutch Feud could go on for another 20 years – what chance have the decent people who presently live in Drogheda and other towns and villages have against these gangs?

Havoc is caused by this device: everybody should be aware of what a PipeBomb is made up of and the destruction it yields to the dwellings but we must also ask the question what happens if a human being especially a child is in the wrong place at the wrong time?

The device was discovered on Tuesday evening.

GARDAÍ INVESTIGATING AN attempted pipe bomb attack in a Drogheda pub are probing if an internal row between dissident republicans was the motive behind the incident.

A viable pipe bomb was found in the ladies’ bathroom of the pub in the Louth town at around 9pm.

The owner of the pub was not the target and there is no suggestion whatsoever that the pub has any links to any criminality.