Dealing with tragedy and criminality is the part of police work that gets most publicity while the grind that oils the wheels of society, like community policing, often only gets cursory mention.

One thing sure to get blanket coverage is garda indiscipline. While reporting on this benefits An Garda Siochana and society, there are signs that some people use it to engage in ugly stereotyping.

Discrimination is unwelcome for any reason: be it gender, race, sexual orientation or occupation. However, recent examples of anti-police prejudice come at a particularly important time for An Garda Siochana.

Policing is undergoing the biggest changes in the history of the State, though readers could be forgiven for not knowing this considering the paltry coverage it gets.

Public support for gardai is of particular importance in Ireland where we have one of the most unarmed police organisations in the world.

Our system works because gardai derive their authority under the principle of consent rather than threat of force. We rely on public cooperation to carry out our mission.

If the ultra-ambitious reform plan, A Policing Service For The Future, is to be realised in time for the centenary of An Garda Siochana in 2022, continued public support will be essential.

We have seen in other countries how irresponsible, ill-informed commentary can shape public opinion in ways that stoke social division.

That’s why fair public commentary about gardai is important. Ordinary, decent officers are as repulsed as anybody else by bad behaviour in the organisation.

Unfortunately, there is a certain minority in society who appear blind to this and indulge in lazy-minded prejudice that borders on the inciteful.

This default position is adopted by people who appear to have an ideological opposition to law and order; while others seem to think dissing the gardai is a way of signalling their anti-establishment, power-to-the-people credentials. In fact, this discourse damages the interest of the people.

So far this year, we have seen commentary about gardai that is highly unbalanced or at variance with easily obtained facts.

One commentator wrote recently that gardai are “untouchable”. This is demonstrably wrong.

In fact, we are subject to the independent scrutiny of the Garda Ombudsman, the Policing Authority, the Inspectorate, numerous government departments and the courts. Members are also subject to the Garda Discipline Regulations.

The same writer wrote “there is a complete lack of respect for gardai” and then placed himself firmly among that cohort by using language about gardai that can only be described as abusive.

It doesn’t stop there. Earlier this year, two academics wrote in an opinion piece of a need to restore “public trust in An Garda Siochana”.

In reality, trust in gardai is at 90pc, according to last month’s Garda Public Attitudes Survey. Indeed, gardai consistently enjoy one of the highest levels of public confidence of any police force in the world.

We also saw the call at the Garda Representative Association annual conference for frontline gardai to receive better equipment, training and armed support described as “whingeing” by a journalist who wasn’t even there.

If he was, he would have heard about garda stations so unfit for purpose that one has an emergency escape through a window above a toilet. Another has rat-infested changing facilities.

He would also have seen us ann-ounce moves to promote diversity and inclusion which we followed through on, attending Dublin Pride for the first time last month. We also acknowledged we have a lot more to do.

Also, senior people in policing have fallen for a stubborn narrative that regards gardai as pawns to be pushed around an organisational chess board without regard for our rights as workers – or the consequences of this for our families.

So, when we say specialist skills should be respected, or highlight inadequate training, equipment, accommodation and resourcing, we should not have to apologise.

It should be recognised that addressing these issues is very much in the public interest too.

However, if the persistent, albeit minority, disregard for gardai gains traction, the whole basis of our policing system will be upended, and then the public’s trust will be shaken.

Jim Mulligan is a detective garda and president of the GRA

‘They had a plastic rat’ – Maurice McCabe tells of online abuse by former Garda colleagues.. Fred says:  The Gardai who posed in the pub with the plastic rat trying to demean a decent Garda, Maurice McCabe, are still, as I write this in the Force and no doubt driving squad cars, and Mulligan wants the Irish public to Respect them.  I say to Mr Mulligan, come down from Mars, and get a dose of logic. 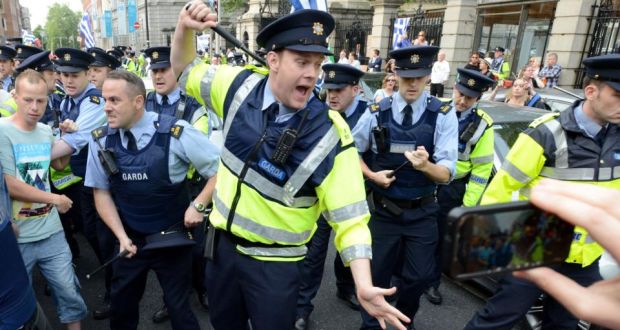 Just look at the Hate in the Garda’s eyes towards that youngster.  Just look at the other Garda Idiot wielding a graphite baton that can literally cause brain damage.  I say to Garda Mulligan now – Go back to the Evening Herald and apologise to the Irish people for your ignorance, arrogance, and total disrespect for the people that the Gardai have lost, not just Respect but who have lost confidence in.  Enough said because the picture above says it all.