Anne Davy featured in an RTÉ Investigates documentary into childcare this week. 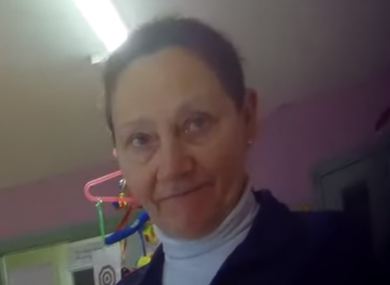 A WOMAN WHO featured in an RTÉ documentary about childcare facilities this week was previously ordered to pay damages to a tenant living in a property registered in her name.

The order was made after a tenant living at a house on Clonliffe Road in Dublin 3 complained about the standard and maintenance of the property.

The dispute is one of three orders to have been made by the RTB concerning properties connected to the Hyde & Seek owner.

Earlier this year, the board found in favour of Anne Davy and her husband Peter after a tenant at a property owned by the couple sought to resolve an issue concerning the overpayment of rent at a property on Saint Bridget’s Road Lower in Drumcondra.

The board also found in favour of Davy in relation to a dispute over deposit retention and rent arrears brought by a tenant living at a third property on Botanic Avenue in Glasnevin in 2014.

Earlier this week, Davy stood down from her duties with Hyde & Seek ahead of the airing of RTÉ’s documentary.

Footage showed Davy roughly handling children in her care, while undercover RTÉ reporters were not garda vetted or asked whether they had adequate childcare qualifications to work at the chain’s creches.

Tusla inspection reports also reveal how the chain has frequently breached minimum standards at the four creches it operates.

The property is adjacent to the Hyde & Seek facility on Tolka Road, one of the three creches which featured on Wednesday’s RTÉ Investigates documentary.

A number of complainants, including former Lord Mayor Nial Ring, objected to the proposal over concerns that the area was already adequately provided with childcare facilities.

Ring also questioned the site’s suitability as a childcare facility in relation to child safety, following contact from who he described as a number of local residents.

In a joint letter to Dublin City Council, 33 residents of Clonliffe Road and nearby Orchard Road and Tolka Road expressed concerns about the site’s planning history, its suitability, traffic issues, vehicular access, as well as child safety.

“We have serious concerns for the welfare of children who would attend this facility, due to restricted access, the varied use of the residence, the possible movement of children between Mrs Davy’s current business and the proposed new facility and Mrs Davy’s prior history of care.

Whilst local residents are not against business development, etc., the nature of this facility and experience of how it is being run at present does not give local residents comfort, and overall it is the welfare, care and safety of the children in the creche which is of most concern.

The letter added that residents in the area had to adjust their increased noise levels as a result of the existing creche on Tolka Road and would have to tolerate subsequent noise associated with construction and new creche activity.

Davy was also refused planning permission by An Bord Pleanála to build a new creche at a shop at the property on Botanic Road in 2013.

Earlier this year, Davy was read the Probation Act after Hyde & Seek Childcare pleaded guilty in court to not registering a creche in Glasnevin with Tusla, despite operating it for 14 months.

In 2005, she was also fined €1,200 at Dublin District Court after being found guilty of failing to safeguard the health, safety and welfare of a three-year-old boy in her care, whom she left behind in Fairview Park during a creche outing on 30 July 2004.

Accounts seen by TheJournal.ie show that Hyde & Seek Childcare Limited made over €2.7 million in profit in its last five financial years.

RTÉ revealed that the company has acquired a property to open a fifth creche in Dublin, although it is not yet known where this is.

Fred concludes:  Reading the newspapers over the last few days, we are back to the bad times again.  Pat Flanagan was correct “A state of scandal after scandal”.  The State must withdraw the funding immediately.  Children need protection, and the parents need to take Legal action here urgently. This Goverment is sponsoring Abuse, and Zappone the PR Stunter will do nothing? in a few weeks this will be hoovered like most other Scandals, Fred