Dublin and Drogheda feuds: ‘Your line of cocaine in a pub is what these guys are fighting over’

Earlier this week senior gardaí said the use of the term ‘recreational drugs’ by officials was helping to normalise substance abuse. 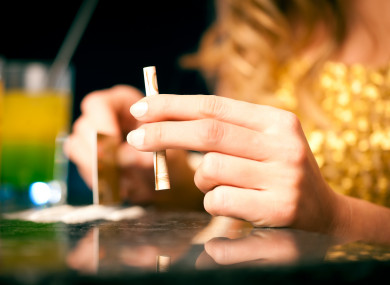 RECREATIONAL DRUG USERS are being asked to consider their role in feeding the market that feuding gangs are fighting over in West Dublin and in Drogheda.

There has been an escalation in gang feud activity in these areas in recent months, with a number of shooting incidents, pipe and petrol bomb attacks and cases of arson. Some of these incidents have taken place in the middle of the day – one in Corduff was outside a school.

Innocent people in these areas say they are now living in fear and they are scared to talk to gardaí when they witness feud activity. Philip Jennings of Safer Blanchardstown told TheJournal.ie that people outside of these communities can not ignore their role in keeping these gangs in business.

“This is driven by money, the money from people using recreational drugs. The gangs are fighting over control of the recreational market – that’s where the big money is.

There is a proportion of it that’s generated by people with a dependence, but a lot of the money is coming from so-called law-abiding citizens who go out to do a line of cocaine in a pub or disco, or those who think it’s okay to smoke a bag of weed at the weekend.

Jennings said people to not see the connection between the money they hand over occasionally to a dealer and “what these guys are fighting over”.

“This is not particular to Corduff or what we see in Drogheda, you see it in Sligo, in Donegal, in every country in the country. This is a national problem, it’s something Irish society has to tackle,” he said.

Janet Robinson, who conducts research for Blanchardstown Local Drug and Alcohol Taskforce, said she ran a focus group with young people recently and they told her they thought there was a “poor link” between recreational drug use and gang crime and the harm to communities.

“That perception told me that more education is needed and it shows how drug use is just totally normalised and people can’t see the real impact. They think ‘I just do my little bit of cocaine at the weekend’ and the dealer might be a friend, they know each other.”

Superintendent Noel Cunningham, who is president of the Association of Garda Superintendents, earlier this week said the use of the term ‘recreational drugs’ is helping to “normalise what is illegal, dangerous and supporting drug abuse in Ireland”.

“We must be careful with our language and supportive of a multi-agency approach to addressing drug abuse within our young and not-so-young communities.”

Garda Commissioner Drew Harris, speaking at the association’s conference, said he agreed the use of this term was “not appropriate”.

“If you look at drugs, drugs feed then into crime gangs and that feeds into turf wars and then that becomes murder and serious violence and all these things are a continuum and that continuum leads to other forms of criminality, be it human trafficking, be it illegal and indeed child abuse online,” he said.

“There is all sorts of problems about being any sort of customer of the drugs trade.

“You are feeding an illegal trade and you only have to look across the water to see the misery there is in other parts of the world, in Central America, for instance, in the drugs trade. Bear in mind your euro, your euros that you’ve spent on drugs is feeding that crime.”

Garda investigators have taken possession of CCTV footage that appears to show a garda inspector, who was arrested two weeks ago, snorting lines of cocaine in a bar.

The inspector and two colleagues — a detective and a superintendent — were arrested by the National Bureau of Criminal Investigation (NBCI) as part of an inquiry into collusion between gardai and criminals involved in drug trafficking, racketeering and money laundering.

The three men had been under surveillance for months. It is understood that the inspector was monitored both allegedly receiving and using drugs. A file is being prepared for the Office of the Director of Public Prosecutions.

Drew Harris, the garda commissioner, was briefed by the NBCI in advance of the officer’s arrest because of the…

Four gardaí suspended over claims of cocaine use at nightclub

Four officers from the same Garda station have been suspended from duty over allegations that they are involved in using cocaine.

The three men and a woman aged in their 20s and 30s were informed that they had been suspended from duty late on Monday night as a part of a massive Garda internal disciplinary probe into alleged cocaine use by the officers. It can also be revealed that the matter is subject to a separate criminal investigation by gardaí.

The four gardaí are based in a Leinster Garda station, and the investigation centres around an alleged incident in a Co Kildare nightclub last December.

A number of gardaí were “having a night out” in the club when it was claimed that a male and female garda were allegedly seen by a nightclub doorman taking cocaine in a bathroom cubicle.

The doorman alerted on-duty gardaí who arrived at the scene and spoke to the officers.

However, it is understood that no illegal drugs have been seized by investigators despite a number of searches taking place.

There have been no arrests yet in the case.

At least three separate homes have been raided as part of the investigation.

A senior source confirmed that the woman garda, who has been suspended, claimed she had received the cocaine from another member of the force.

It is understood that she claimed the amount of the drug given to her was a small quantity for personal use only.

The scandal has caused “great stress” to officers in the Leinster station at the centre of the allegations.

“What makes this case particularly strange is that none of the gardaí being investigated was actually caught with any drugs,” a senior source said.

“Since these allegations first emerged a month ago, it has caused great stress to many

officers in the station who are trying to go about their

duties with this mess seeming to hang over everyone,” the source added.

As well as possible criminal charges, the gardaí involved could face disciplinary sanctions including reduced pay, loss of rank and dismissal.

It is not known how long the four gardaí will now be suspended for, but sources stress they “have a right to their good names” until the two investigations conclude.

Fred concludes:  Reading the above articles gives you a small insight into the level of drug abuse in this country.  I agree that no drug should be called “Recreational” but the Gardai themselves have a serious problem with drug abuse from within their own private army.  Denial is one thing, but in every station, decent Gardai know who is taking drugs and who are taking the bribes and it questions logic how Charlie Flanagan, after the Maurice McCabe Blockbuster, hasn’t brought in a safety net for those decent Gardai to come forward and to not be afraid to root out the Rogue Gardai and those who take cocaine and those Gardai who make money from it.  The incident in Kildare nightclub is very serious.  It is four Gardai from the one station and alarm bells should be ringing there.  Since the investigation is ongoing we cannot say too much for legal reasons about it.

Then we have the Garda Inspector, a senior rank, who takes a line of cocaine in a pub in full view of other customers.  One would have to ask is Irish Society breaking down?  We must also ask why is this individual not before the courts?  Yes, I agree with headlines above that people who take cocaine are fueling the drug wars, not just in Ireland but across Europe and globally.  I have mentioned again and again that the parties in Dublin 4, 2, 6 and 8, at the weekends are full of coke heads in their designer clothes and the Merc parked outside.  Without these buyers there would be no market.

In the last couple of days I have heard from sources of a well known property tycoon who spends in the region of £5000 per week for himself and his friends.  Let us have a look at RTE and their deep denial in relation to the late Gerry Ryan!  I wish no slur on his family but he had a motor mouth and a serious coke habit and people at Montrose knew all about it and they did not open their mouths.  These same people will then face the Irish public from the screen and tells us all about the scourge of drugs that is causing havoc across Ireland.  I have made my point.  Enough said.