Calls have been made for greater transparency from the Garda after the force refused to disclose how many of its officers hold a criminal conviction.

The organisation said the information was “personal” and that it would not be in the public interest to disclose it.

The Press Association had asked the Garda, under the Freedom of Information Act, for the number of gardai who have been convicted of a crime since 2016, as well as details of the crimes and disciplinary action taken.

The Garda, however, has refused to provide the information, leading to demands from a member of the Oireachtas Justice Committee for greater transparency from the force.

The Police Service of Northern Ireland and other police forces across the UK and Wales have all previously released information about the number of officers with criminal records.

Fianna Fail TD Jack Chambers said there must be openness and transparency within the force.

“The public has a right to know how many gardai have criminal convictions.

“It is about being open and transparent. As long as the information is disclosed carefully there should be no reason for it to be withheld,” said Mr Chambers.

He added: “There should be a transparent release of figures like this, just as there is from other police forces.

“I think it is important that as the pace of reform continues within the organisation that there is openness and transparency.”

Responding to the Press Association’s request the Garda said that a search was conducted in the disciplinary section of human resources to identify the records sought.

Upon reviewing the records however, it was deemed to be “personal information” and should not therefore be disclosed.

The force added that “the public interest in preserving the personal information and the reasonable expectation that information can be maintained in a confidential manner by An Garda Siochana in the context of its disciplinary proceedings outweighs the public interest which would be served were the records released.”

It also claimed that to disclose the information would “constitute a breach of a duty of confidence” and added “it would be unconscionable for this organisation, engaged in processes involved in alleged breaches of discipline, not to treat the information relating to the process as confidential”.

What is the point, if they dont inform the Public they serve, who the Rogues are?

The Garda Commissioner has said the organisation wants to show it is serious about making sure What?

Chief Superintendent Johanna O’Leary, who was previously assigned to the Westmeath division, has been assigned responsibility for the unit.
Image: Garda Press Office 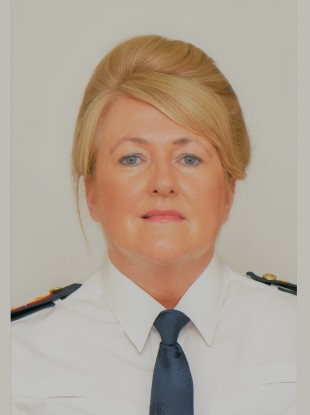 Chief Superintendent Johanna O’Leary, who was previously assigned to the Westmeath division, has been assigned responsibility for the unit.
Image: Garda Press Office

A CHIEF SUPERINTENDENT has been appointed to set up the new garda anti-corruption unit, which is to be established by the end of this year.

Chief Superintendent Johanna O’Leary, who was previously assigned to the Westmeath division, has been assigned responsibility for the unit, An Garda Síochána confirmed today.

Garda Commissioner Drew Harris has said the new unit will investigate allegations around drug use, the flow of information outside of the organisation and inappropriate associations with criminals. He said the organisation is serious about ensuring any corruption is “stamped out”.

“As an organisation we want to be proactive, we want to show that we are very serious about making sure we have a healthy workforce, which is an honest workforce,” he said in May.

Chief Superintendent O’Leary will have responsibility for the establishment of the unit, including the development of policies, procedures and legislative provisions and will report to the Assistant Commissioner for governance and accountability.

In May three members of An Garda Síochána were arrested as part of a corruption probe.

A superintendent was arrested on suspicion of breaching legislation which relates to passing on information obtained in the course of garda duties.

An inspector was questioned over suspected breaches of the Misuse of Drugs Act, while a ranking garda was arrested under suspicion of perverting the course of justice.

The Garda Inspectorate also recently launched an inspection of counter corruption practices within An Garda Síochána. The examination is focusing on the effectiveness of the organisation at preventing, detecting and mitigating against internal corruption.

As part of the review, the inspectorate will examine vetting in selection processes and supervision and will assess the force’s capability to investigate corruption in terms of confidential disclosures, intelligence and information sharing.

It will also look at substance testing, transparent decision-making and the maintenance of professional boundaries.

Fred concludes:  What part of Transparency do the Gardai not understand?  We can list tens of Gardai down the years and name them who have been convicted of Bribery and Corruption, add to this drug dealing.  Yet now Commissioner Drew Harris has set up a Garda anti-corruption unit which means exactly what?  Jack Chamber, FF, is consistent in the Dail in asking a direct question.  Yet, he is duly blocked by that Dail Code called Omerta.  Sometimes I can understand that it is very confusing out there with the letter C, C for Cop; C for Criminal, it is a bit like Gardaland and Gangland.  They share the code of silence from within.  Gardai now maintain that they scooped a big one in Monaghan – 4 loaded guns ready for delivery; it is like saying – we found a light bulb in a hardware shop.  Are these Clowns for real?  There are more guns for hire out there now than there are sheep in Wicklow.  After all the fake numbers in the last four years from An Gardai Siochana (breath tests, domestic violence, and murders unsolved), one would have to ask, are the Irish public getting any Truth from Garda HQ at all?  McCabe left a major question mark; he left standing tall; but he was a very wise man when he said the words “I have to leave now, it is too dangerous for me to stay on”.  Now anybody out there with a brain cell today who listened to the words of this decent cop, should be worried.  Where to next?  Fred