Gardai recovered a sawn-off shotgun and ammunition after the operation

Three women have been arrested and a sawn-off shotgun was seized after an operation targeting crime gangs in Longford town.

Gardai made the arrests after stopping a car on the outskirts of the town on Monday.

Officers found the gun, as well as ammunition, in a nearby field in a black bin bag which was allegedly dumped by one of the suspects in the car.

A garda spokeswoman confirmed to the Irish Mirror that the women, two in their 40s and one in her 20s, were taken into custody at Longford Town Garda Station after the operation.

She added: “During the course of a search of the area Gardaí discovered a sawn off shotgun and cartridges wrapped in a black refuse bag.

“These items were allegedly disposed of in a nearby field by a passenger in the suspect vehicle.

“They are currently detained under the provisions of section 30 of the Offences Against the State Act 1939. Investigations are ongoing.”

Many members of An Garda Siochana recognised the serious increase in antisocial behaviour, crime and drugs supply that increased exponentially with the population explosion

Drogheda violence ‘is gone beyond feuding – now it’s about revenge

Footage from the scene where a man has been shot dead in Clogherhead, Co. Louth

The widely publicised gang feud in Drogheda, many will argue, started in 2018 with the attempted murder of a man on the Cement Road.

A gunman entered a halting site and discharged several rounds into the body of his victim, leaving him writhing in pain and resulting in him being confined to a wheelchair for life.

A turf war ensued and over a year on, the 70-plus incidents of shootings and bombings is the result of two main factions who are hellbent on seeking to destroy each other and take over the lucrative drug supply in the town and in the North-East.

I would argue this shooting didn’t kick-start the many dangerous incidents that have stretched the Garda locally and nationally in their quest to keep a lid on this deadly feud.

The problem goes back many years as Drogheda’s population exploded and investment in the force failed to keep pace.

Many members of An Garda Siochana recognised the serious increase in antisocial behaviour, crime and drugs supply that increased exponentially with the population explosion.

Successive governments failed in their duty of care to the residents of Drogheda.

The Garda effectively became reactive rather than proactive, leaving a deficit in criminal intelligence that is necessary to counteract criminals and their networks.

Even with the lack of resources, gardai had many important successes which resulted in the confiscation of drugs, money and firearms, including the incarceration of a number of key members of the feuding gangs.

Some former senior officers in Drogheda failed to recognise the direction crime and drugs were taking and the correlation between drugs and crime.

The drugs unit in Drogheda was effectively disbanded in favour of increasing the community Garda unit and from then on the well of intelligence dried up.

The tried and tested rule in police forces all over the world is “catch enough small dealers and you will eventually get their boss”.

The current chief superintendent in the Louth division Christy Mangan and his superintendent Andrew Watters recognised a fit for purpose drugs unit was essential if they were to make inroads into the gangs who had a free reign for a number of years, allowing them to build up a network of foot soldiers and customers.

After a relatively short period of time a picture would build of this network culminating in significant seizures of money, drugs and firearms and the incarceration of gang members.

Following the murder last week of Keith Branigan in Clogherhead, the main players in the feud will seek to avenge his death.

This has the potential of escalating the violence associated with the opposing gangs.

Some may ask why gardai cannot keep the main players under surveillance 24/7 but this is ridiculously
expensive and would require a very large number of gardai for just one surveillance operation.

The best gardai can do is pay passing attention to the higher profile players which I’m sure is happening.

The armed response units and the national emergency response unit are a constant feature on Drogheda streets, but it is impossible to be everywhere at the same time and the criminal gunmen can choose when and where they carry out their next attack.

A multi-agency taskforce, similar to the one set up in Limerick over a decade ago to tackle the gangs, should be considered in Drogheda’s case.

And I am sure behind the scenes a large dossier is already being compiled on many of the chief protagonists. In the meantime, Drogheda holds its breath and awaits the next move in this murder feud.

City socialite arrested as €1m worth of heroin seized

A Dublin socialite was arrested after being seen meeting Irish and international drug smugglers being investigated over a heroin stash worth €1m.

The man in his 40s was one of three people held as part of a joint investigation by gardaí and UK police into a drug trafficking ring in Ireland. He was later released without charge and a file is being to the DPP.

Gardaí are investigating whether the massive haul is linked to a west Dublin crime group known as ‘The Family’, which has significant links across Europe.

Three men – including the socialite, a mob boss who is an English/Indian dual citizen and a Turkish drug trafficker – were arrested on Sunday.

The Irish Independent has learned the men were observed at a meeting on Saturday night in Kildare with an associate of ‘The Family’ gang.

Detectives suspect a crime summit was taking place over a smuggling operation, and moved on the gang the following morning. A number of properties in Meath and Dublin were searched, including a B&B on the south side of the capital, where 7kg of heroin was recovered.

The investigation was led by the Drugs and Organised Crime Bureau.

The three men were arrested and held at separate Dublin Garda stations as part of the investigation. The Irish national arrested was once known in celebrity circles and had a high-profile partner.

Sources said he was not under investigation prior to his arrest for involvement in the drug trafficking trade.

The English/Indian national will appear before Blanchardstown District Court this morning, charged in connection with the drugs haul.

The Turkish man, aged in his 40s, is considered a major supplier of heroin who arrived in Ireland earlier this year.

The arrests have been described as “highly significant” because of those being held in custody, while the heroin haul is the largest recovered this year.

Detectives believe the drugs are linked to ‘The Family’, suspected of being the biggest distributors of heroin in the State.

The crime group has been a priority target for anti-gangland officers as well as the Criminal Assets Bureau with Assistant Commissioner John O’Driscoll saying the seizure is the result of an “intelligence led” probe.

THE devastated dad of missing Willie Maughan last night hit out at the murder of Drogheda feud victim Keith Branigan and said: “I warned this would happen.”

And grieving Joe Maughan – whose son, 34, and his Latvian girlfriend Ana, 21, were murdered by the gang behind Branigan’s slaying – believes the ruthless mob will identify other “soft targets” as the feud continues. 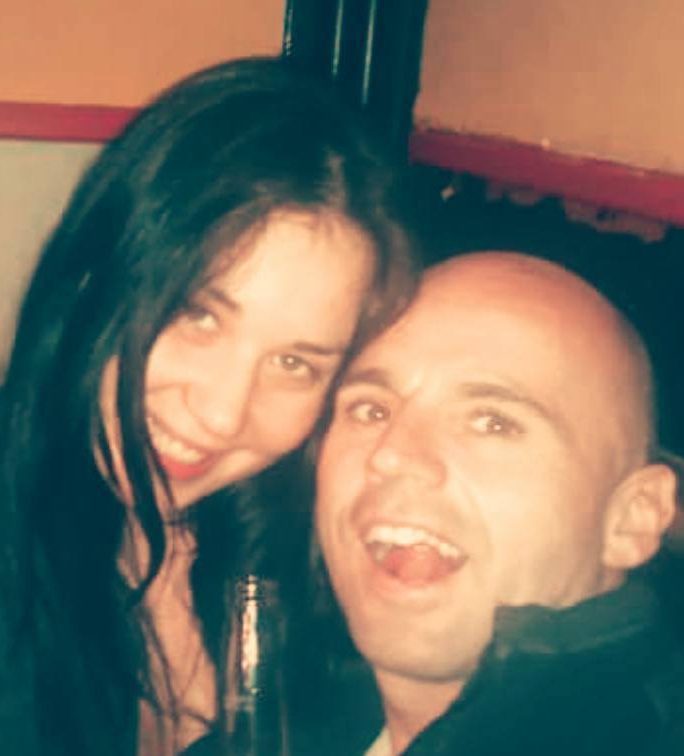 Willie and his pregnant fiancee Ana, both pictured above, were last sighted in Gormanstown, Co Meat

Fred’s summary today:  Yesterday, I sat in my car in a South city street and wondered why a squad car had parked with flashing lights.  I then looked across the road and observed a homeless man being interrogated by the two cops, probably they had nothing better to do and most likely bored, they decided to pick on the easy target, those who have to beg, those who are hungry and cold, and most likely addicted to drink and drugs.  Now notice the last sentence “Addicted to Drugs”.

The Gardai are focused alright but sadly in the wrong direction.  The Government and the Commissioner are leading the way on the War on Drugs and should be totally focused on the Drug Dealers; Suppliers; the middlemen; the foot soldiers; and last but not least the people who launder their dirty money, like crooked lawyers, accountants, shopkeepers, students, and not forgetting the Rogue Gardai from within.  It is ironic that a small country like the Irish Republic, when they put their minds to it, can organise Pink Parades and Pink squad cars and I agree it is a great day out and great fun but we have to get back to saving lives and more importantly preventing the young who could become the drug dealers in the future, from a life of crime and mayhem.

The Gardai are always crying out for more resources but I don’t accept this and yesterday while sitting in the car watching the two idiot cops interrogate a homeless man, I was asking myself while reading the paper, why are they not in Drogheda helping the local Gardai in maintaining law and order.  Drew Harris made many promises and the people of Ireland await the outcome.  He would need to start with a sense of urgency because this country when you read above, is sinking in heroin, cocaine, crystal meth, fentanyl and not forgetting the craze of now, the addiction to steroids.  So where does this war end and how many more lives will be wiped out.  As Pat Flanagan, journalist, said “years ago in Clogherhead it was the middle of nowhere – nobody land – now people are shot dead – a young father lay shot dead in a caravan park, where people go to relax for their summer holiday.  Also years ago you had to apply for a licence to sell ice-cream – the Drug Dealers and Drug Lords, need no licence, to sell their evil merchandise.  They have no problem using same to take the life of others who they consider enemies.

The War on Drugs in this country will only be won when a collective team of agencies come together around a table and that includes Gardai, Politicians, Church, but more importantly the people of Ireland and the reason I mention the people is the trust in our Gardai is nearly gone; it is the purpose of Flanagan and Harris to get it back.  Yesterday watching the two cops in Dublin 2 did not give me much hope.  Parents are stressed out; they are paying the bills of their sons and daughters along with the grandparents while the Gardai turn a blind eye.  As I said before a grandmother in Mayo paid £15,000 to a Drug Thug, the debt of her grandson, on the advice of a detective who is still serving in the county.  This in itself is a crime.

To read about three women in Longford all tooled up with guns and ammunition tells me a story that Ireland is definitely a changed country and not for the better of society.  I wish I could say something positive but the drugs that the Gardai seize is only 10% of what is coming in.  The people who launder money drive their mercs/BMW’s/SUV’s, take their foreign holidays; their wives shop in Brown Thomas; their sons and daughters attend private schools and yet they are as guilty as the Drug Thugs who pull the trigger and take out lives.  Fred