A MUM-of-two has told how a predatory estate agent sexually harassed her and threatened to leave her and her kids on the side of the road just 12 weeks after her partner suddenly passed away.

Brave Kirsty-Cyane McGill today opened up about the horror she was subjected to while renting a Dublin property.

It comes after Solidarity-People Before Profit TD Ruth Coppinger last week read out a separate series of text exchanges which highlighted how Irish women are being propositioned by landlords to exchange sex for rent.

Speaking today, Kirsty, who is no longer living in the property which she rented for a year until September 2017, explained: “I wanted to speak up today because women have had to deal with these kind of advances or sexual harassment in almost everyday life.

“But the one place you should feel safe is in your own home. When my landlord was harassing me, I wouldn’t speak out. I was terrified.”

Kirsty, who was eligible for the Housing Assistance Payment, had spent ten months searching and was fearing homelessness before she found a house in 2016.

But soon after, red flags began to appear over her letting agent.

Kirsty explained: “He was asking me to meet me at my current property ‘to see how well I kept it’, to then offers of celebratory drinks on signing my lease to jokes about candle lit dinners and constantly turning up unannounced for the most minor matters and so on.

“Each advance, I felt obliged to be polite and tried to laugh off to make it less sexually awkward.

“I felt obliged to put up with this because we needed somewhere to live.”

Before she had signed the lease to the property, the perv sent her messages which read: “I’m here Kirsty! Dinner on, table set and wine chilling. How’s that?”

And he replied: “I’m blowing out the candles.”

That was not a once-off either.

She said: “He would have been in and then leave but send a message saying, ‘What was that you were cooking, it smells lovely. You keep such a great home’ — all these messages that you don’t want.”

But things took a dark turn when Kirsty — a mum of two boys aged ten and 15 — challenged the man, who works for a Dublin letting agent, over things like heating.

And the vile sicko began using intimidation tactics, with Kirsty being forced to get help from neighbours when he refused to leave the home after he turned up unannounced.

But perhaps the most sinister move was threatening to leave her and her kids on the side of the road just 12 weeks after her partner suddenly passed away.

The hairdresser said: “He turned up on my doorstep on a dark October evening with a notice to quit my tenancy.

“It turned out the property owner had no knowledge of it. One he didn’t follow through on. One he was using to scare me and he did scare me.

“He refused to leave my house that evening after I asked him multiple times to leave. I had to leave my own house and get help from a neighbour.

“I was terrified in my own home that this man, who was so unpredictable, had a key to my house.”

She added: “I was terrified to learn from my neighbour this estate agent has previously done this. Terrified of what might happen if I reported him, where would we go? It took ten months to even find this house, but also what will happen to me if I don’t report him? I was trapped.

“This was abuse. He eventually gave me my notice to quit, leaving me and my two children potentially homeless just 12 weeks after my partner passed away.”

Kirsty emailed the letting agents to raise concerns over the predator’s bully tactics, but they were never acknowledged. She and her boys moved in in 2017 before the homeowner changed letting agents.

There is no suggestion that the homeowner was aware of the letting agent’s behaviour.

Kirsty was speaking today at a press conference held by Coppinger, who insists the HAP scheme is at the centre of this abuse.

Coppinger — who, along with TD Mick Barry met with Housing Minister Eoghan Murphy this evening — said: “There’s a pattern that’s emerged that in the HAP sector where you tend to have young, single parents, mainly women who are renting and are very, very vulnerable because there are so few properties that will accept the HAP payment.

On landlord in Dublin 24: “I PUT on my washing and when I arrived home, the landlord had all my clothes dried, ironed, folded neatly in a basket and left at my door.
He commented on my bra and underwear size saying I had the perfect shape.
I felt very uncomfortable thinking he was touching my belongings and thinking these things about me.”

On landlord in Dublin 7:
“I WENT to the viewing and he knew it was just me and a small child. After it, he e-mailed me proposing he would choose me if he could call up whenever.
“He then said I was the best (applicant) of the night but he may hold more viewings unless I could give him more. I was so desperate at the time, I was close to going back.”

Exchange of text messages between landlord and tenant:
Tenant: “Haha dnt say somethin u may regret in the morning.
Landlord: “I wouldn’t regret it…. but I may feel slightly uncomfortable if my words were not accepted… Hehehe.”
Tenant: “Don’t forget… there’s a line between landlord and tenant.”
Landlord: “Jeez… who are you telling!! A 10 year line that I’m 100 % proud of & have made some amazing male and female ‘friends’ during that time. Apologies if many tongue is loose tonight with the aid of 6 beers and my fiery testosterone hormones. Hope you don’t understand…”
Tenant: “Its [sic] cool no worries goodnight.”

“HAP immediately puts them in a really weak position in terms of the balance of power between the letting agent or landlord and the tenant. This has been created by the state as the main forum of social housing.

“We’re also creating a situation where young women who are on their own are being targeted and preyed on by landlords and agents who may be so inclined.”

Kirsty added: “This is just awful that women have to put up with this, especially women coming out of homelessness or that are at risk of homelessness.” 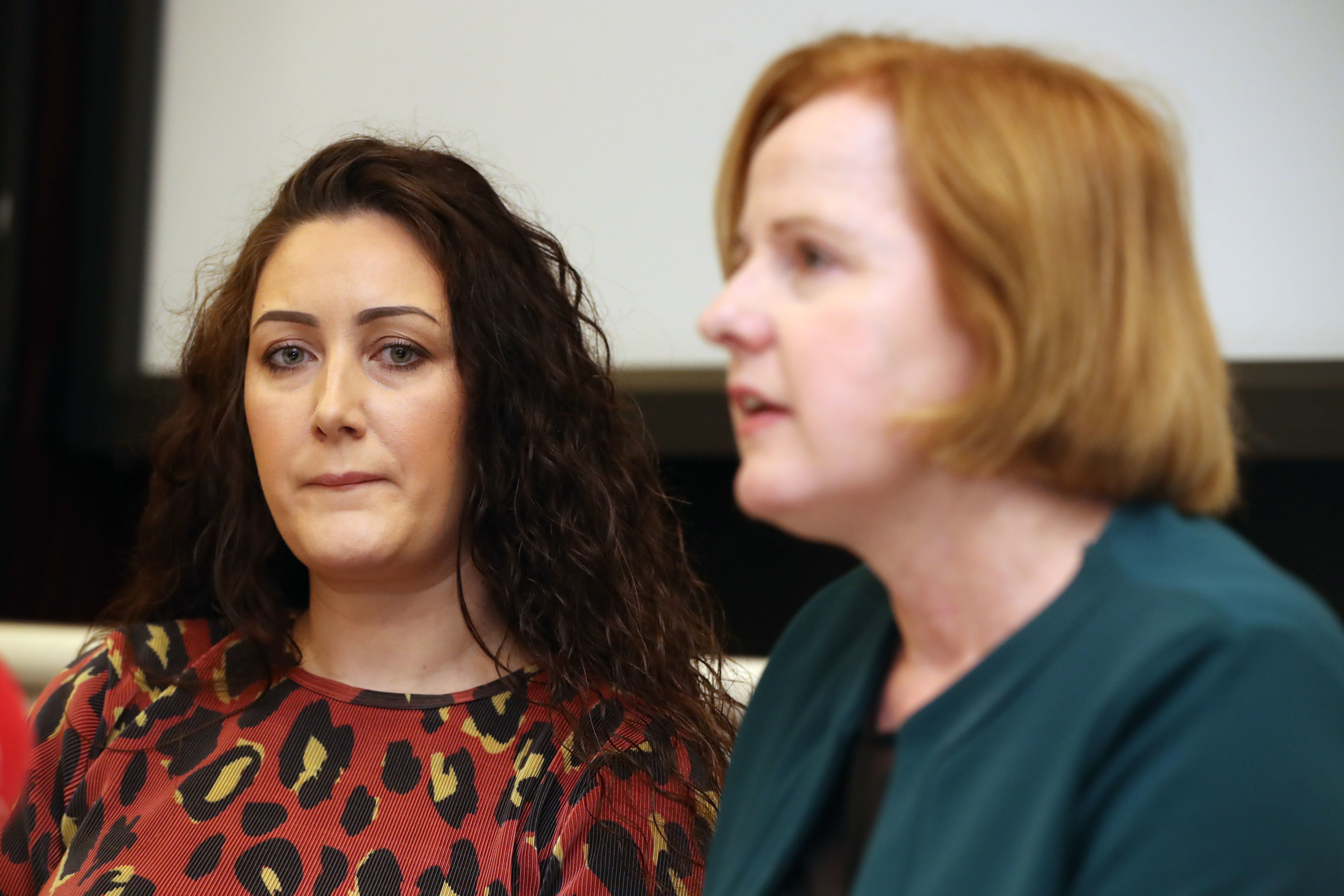 Kirsty was speaking at a press conference held by Coppinger, who insists the HAP scheme is at the centre of this abuse Credit: PA:Press Association

Fred concludes:  We have had the fall-out from the allegations about the Gate theatre; we have the fall-out from the National Museum, we have had other horrendous stories of women being harassed in semi-state bodies across Ireland and now we have estate agents allegedly stalking vulnerable widows who are looking for a home for their children.  When does this stop?  Let us not forget the young vulnerable men who are targets also of women who abuse their power in office situations and who demand sex for promotion.  Yes, remember the film with Michael Douglas and Demi Moore – make no mistake about it sex pests come in all genders.  In the case above, it is a shocking read that a young woman who has just lost her husband in the last two months can be treated like this and the man will face no charges or may I say the Bastard should face a court of law.  Fred