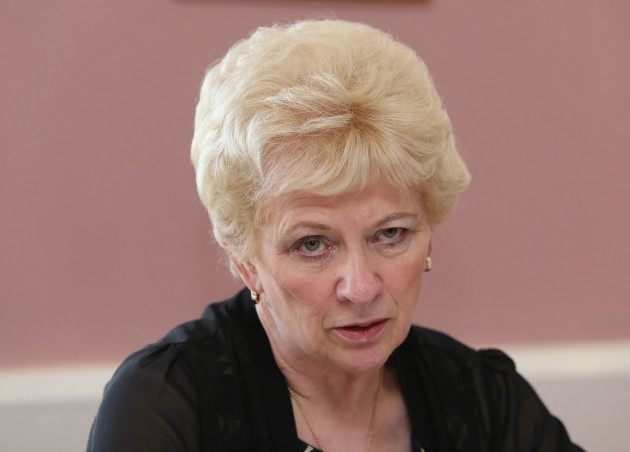 A FORMER POLICE Ombudsman for Northern Ireland has slammed the Garda Representative Association (GRA) for coming out in favour of a Yes vote in the upcoming referendum on same-sex marriage.

I think it’s appalling that they’ve come out with this.

In Garda Review editorial, GRA chief PJ Stone has called for the organisation’s members to vote Yes in the referendum.

It is the first time the GRA has taken a stance like this, and described the vote as a moral rather than political issue.

However, following an opinion piece in The Irish Catholic, O’Loan told RTÉ that she believes this goes beyond the function of the GRA.

“These guards, they swear an oath that they will faithfully discharge the duties of a member of the Garda Síochána with fairness, integrity, regard for human rights, diligence and impartiality, upholding the Constitution and the laws,” she said.

It doesn’t say that they will act to change the laws if they don’t represent or comply with their views on the law.

O’Loan, who said she is staunchly opposed to same-sex marriage but in favour of all relationships being entitled to the same legal protections and respect, said the GRA is acting “way outside” of their remit as an organisation to represent gardaí.

Acting politically is clearly something you don’t want your police to do.

The baroness said she would be just as vocal if the GRA came out in favour or against any other political issue.

Mothers and Fathers Matter said O’Loan “is right, obviously”, and said it raises the issue of the silent No vote.

“Across the country, people are simply afraid to say that they are voting no, for fear of the backlash,” the group said a statement.

The appearance of a member of the force in a Yes Equality photocall sparked criticism from MAFM.

Fred says:  I totally agree with Nuala O’Loan and I just found this article by accident this morning.  The Garda Siochana are the National Police Force of the Republic of Ireland.  The basic of their duties is to protect and serve under the Laws of the Land.  What I am saying here is:  they should not be getting involved in Referendums or entering the area of politics of any sort.  I voted myself in the Referendum of 2015 and I know from many people, especially in semi-state bodies across this country, and the public service, that they were called into meeting rooms and told it would be in their best interests and for career opportunities to vote Yes.

On a personal level, I know that Gay people have informed me that they strongly disagreed with the Garda presence at the last parade and the cars because some of their elderly statesmen had lived up through the 1960’s, 70’s, 80’s literally underground and many had been beaten up in Garda stations and no legal standing in the courts of Ireland.  This was appalling to say the least but now that they have a sense of equality, as a minority, I say live and let live because the more they parade the more they are detaching themselves from the majority of the people on this Island.  Enough said on this topic.  I want to talk today about the function of our Police Force.

From 11.05 am yesterday until midnight last night my phone would not stop ringing and texting, from all over Dublin 4 and Dublin 2 especially.  Other texts came from taxi drivers and men literally on buildings on the same street where the two Cops dined and relaxed for 40 minutes approximately in their squad car parked at Baggot Street hospital.  There is no point in hiding the street now because it is out there on social media now.  We all know that Gardai have to eat like everybody else, and have their break but they were only 5 minutes from their station and it would have been more professional to have dined and had their catnap at the station rather than sit in a squad car in open view of people passing by in total disbelief and young people laughing at the site of them.

As I said yesterday I am not vindictive person and I will not put up the photo of the two Gardai in the car – it is not the way I work unlike the Rogue Gardai.  It is ironic that the above headline is 2015 when the nightmare began for us.  I repeat and I have said it over and over again.  How could a squad car with the cops involved could come to a home 32 times on a specific mission to stitch up innocent people.  This incident will not go away until there are some answers and the DPP did not buy it and threw it back to source and rightly so.  Now there are more questions coming down the road and they are really serious ones.  Before I conclude today I would like to ask Garda HQ to define the words “Impartial Investigation”.  Let me assist on this.  A Garda calls on his own on 5 occasions and has dinner with the Romanian complainant and her partner (now separated from her).  Let me put it another way her partner is walking around Dublin 4 with his new girlfriend.  My question is how impartial was that investigation and if this is not thoroughly looked into; it will happen again and again to other innocent couples.

As I have said before we all here that Irish people can be racist towards minorities and the bleeding hearts jump on the bandwagon and play their blame game but in this case this woman was completely racist towards an Irish couple assisted by members of An Garda Siochana and if the facts were really known she was probably groomed in what to say in making her statements.  The Rogue Plan fell apart but could you imagine if it had not and a wrongful conviction was the outcome.  This is why I am so stressed and I cannot let this case go unheard.  I would like the Commissioner to do all he can in relation to finding out why people who had phoned the station were never given the chance to make a statement in the innocent Irish couples’ favour.  Enough said for now.  Fred