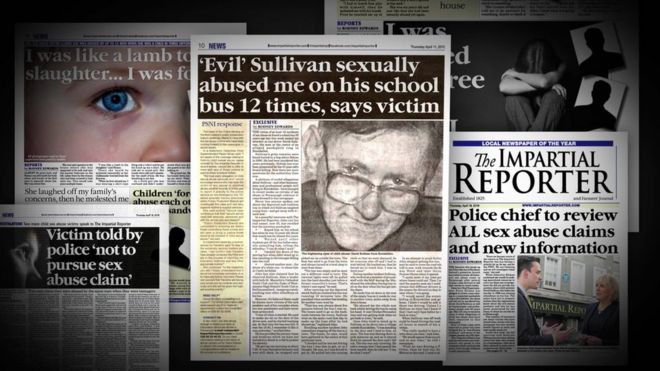 A woman whose said her brother was drugged and raped by a paedophile over 20 years ago has no confidence in a new inquiry into historical sex abuse in County Fermanagh.

She said her family were told by police at the time to drop the case.

It comes after police appointed a team of specialist child abuse detectives to investigate historical claims.

More than a dozen victims in the area have told their stories to the Impartial Reporter newspaper.

In Thursday’s paper, a woman revealed how she was sold for sex by her childminder.

The claims first started to appear in March when a man walked into the office of the Enniskillen-based newspaper to tell his story.

He said he was the victim of a suspected paedophile ring in the county.

In the weeks that followed many more victims have come forward with similar stories.

The common theme was that none of them felt they had ever had justice.

Some of them name David Sullivan, a former bus driver and youth club leader, as their abuser.

‘Will anybody get closure?’

A woman whose brother was drugged and raped by Sullivan said her family told police at the time but were advised not to press charges.

Speaking anonymously to BBC News NI she said it was “heartbreaking to my family because my brother didn’t get any justice”.

“Even now… I have absolutely no faith in the police nor does my family,” she said.

“At the time, it should have been investigated.

“There’s going to be no closure in my eyes for any of the victims in this.

“The perpetrator is dead now – maybe there’s others out there that might be still alive that can be prosecuted.

“That may be the case but will anybody get closure after this length of time?

“The effects that it’s had on my brother [are] never going away.”

“One of the questions is what did they know about the litany of abuse that child abuser David Sullivan carried out in this town when he was still alive?” asks Mr Edwards.

“I know there are certain things that they can’t talk about regarding his murder, which was very brutal.

“He was murdered and his body was found two years later in a bog near Belcoo.

“But we need to know what exactly they knew about what he did when he was alive, because we know they were told about some cases and I’ve spoken to victims who approached the police about what he did.”

Det Supt Anne Marks of the Police Service of Northern Ireland (PSNI) told BBC News NI that detectives were aware of two cases reported before Sullivan’s death “that would suggest that he did abuse children”.

Eleven people in County Fermanagh have come forward to police since the specialist team was set up this month.

“Of those 11, almost half of them have previously come to the police before and reported their concerns about childhood sexual abuse,” said Ms Marks.

“Two of those reports related to David Sullivan.

“We now have dedicated officers – those officers deal with cases of abuse, of child abuse, sexual abuse, domestic abuse on a daily basis.”

In response to claims police had let down victims of abuse, Ms Marks said: “It is very difficult to comment on something that happened 20, 30 years ago.

“The response that they will get now will be a supportive one.

She added: “We can only go where the evidence takes us so the more people that come forward the bigger picture we will have of what actually happened at the time.”

The allegations have continued, with a woman telling the newspaper she was sold for sex by her childminder when she was a young child.

She says most of her 15 abusers are still alive and living in County Fermanagh.

Sullivan’s dismembered body was found in an isolated Fermanagh bog in 2000, two years after the 51-year-old’s murder – a crime detectives believe was potentially linked to the abuse claims. No one has ever been convicted of the killing.

One of those who has contacted police claims Sullivan abused them as early as 1963 – suggesting the former bus driver and youth club leader was potentially preying on victims for more than three decades.

Sullivan’s alleged victims were both male and female – some were adults when they were targeted, some were teenage children.

However, the PSNI have said they have not yet been presented evidence that he was operating as part of a wider abuse ring in Fermanagh.

The victims who have come forward to date have suggested he was a lone wolf abuser.

PSNI Detective Chief Superintendent Paula Hilman said: “At this point in time the allegations we have against David Sullivan relate to David Sullivan only.”

Of the 19 cases the specialist team is working on, 11 involve people who had previously reported abuse to police but no prosecution resulted. Officers are now reviewing the files to see if any evidential opportunities were missed.

Mrs Hilman, head of the PSNI’s Public Protection Branch, provided an update into the sex abuse probe as she urged victims who have not yet come forward to trust officers and other support agencies with their stories.

The police initiative has been triggered by a series of reports in the Impartial Reporter newspaper in Fermanagh, which has provided a platform for victims to tell their stories over several weeks.

Twelve of the 19 PSNI investigations do not involve claims against Sullivan. Police do not believe there is anything to link these 12 cases, some of which relate to historic abuse committed by family members.

The Impartial Reporter has spoken to more than 20 people who have recounted their experiences of historic sex abuse in the county, many identifying Sullivan as their abuser.

Mrs Hilman said she wanted to provide reassurance to victims who were still hesitant about coming to police.

“I am aware of people saying of a previous experience with police and perhaps they don’t have that confidence to come forward – I would say to them ‘give us that opportunity, talk to us, let us come to speak to you and let us see what is best for you and how we can help you as victim’,” she said.

She highlighted that victims could also approach other organisations, such as Victim Support NI or counselling service Nexus.

Mrs Hilman stressed that people did not have to tell their stories in police stations, highlighting the regional Sexual Assault Referral Centre (SARC) at the Rowan Centre in Co Antrim as a potential setting to share distressing recollections.

She said detectives were aware of speculation and rumour about a major paedophile ring in Co Fermanagh involving Sullivan, but she said there was no evidence of that to date.

The officer urged anyone with knowledge of such activity to come forward.

“I am aware of the coverage in Fermanagh and I know there’s been lots of speculation and conversations about what people know and what the police knew and didn’t know and what I would say and appeal to people – ‘if you know something about historical child sex abuse come and talk to us’,” she said.

“We can only act on what we know and while there may be lots of commentary and conversations I am not sure police know all of that and I would ask people to come forward and talk to the investigation team.”

Mrs Hilman joined representatives from Nexus and Victim Support NI at the Rowan Centre, which is located in the grounds of Antrim Area Hospital, in a bid to highlight the range of support on offer to victims if they come forward.

Karen Gallagher, the interim CEO of Nexus, said 75% of the 1,000 clients they deal with each year are victims of historic abuse.

“We are here to listen to people and help them sort out the trauma that they have been through and in the hope they can lead a happy and fulfilled life post-counselling,” she said.

“I think the recent reports that have come out from Fermanagh have been harrowing to say the least,” she said.

“It really has highlighted again how many victims who are suffering and who haven’t been able to come forward and they are suffering in silence so, as an organisation, we really want to engage with those people and offer them support through our service.”

She said people were often scared of telling their stories.

“There is a lot of guilt and shame attached to this type of crime so it’s (our work) helping them realise that that guilt and shame definitely doesn’t land with them,” she added.

The above article is quite alarming to say the least, and the one that follows it sums up how Ireland operated in relation to child abuse both North and South of the Border for decades.  The cover-ups still continue and make no mistake about it there are still people in Government circles and as we now know also within the DUP, THE BIBLE THUMPERS.  These perpetrators are well protected up to the present day and I am talking from the research I was asked to do by victims of child abuse over the last 15 years.  Let me go one further today:  Only a few years ago a sitting Circuit Court Judge wrote a letter to a now convicted Paedophile asking him how was he coping through all the media coverage and the court case (s); the leak came thankfully from an eagle eyed court clerk who we cannot name but when this clerk saw the Harp Government sign on the page he realised this is morally wrong.  This Judge is not speaking or writing on behalf of the Irish people, this is how it was leaked.  This was some years ago now but it gave me quite a stomach ache to realise how deep Paedophile Rings operate (d) in this country with protection and support from the Top Down.  It is also ironic that when this Paedophile went in for questioning the Judge’s wife would drive him and collect him.  Now this should enlighten people about what is going on in this sick society we live in at present.  What do people do if they go before a court and the sitting Judge is a personal friend of a convicted Paedophile?  Where is the impartial Code of Justice here?  Where is the Separation of Powers here but more importantly how can we trust that our children will be protected by the State?  Our media and especially RTE have been caught out also.  The Irish Times have Tom Humphries and RTE thanks to the Hawk Eye of the Paedophile Hunter, Craven would never have been caught.  Thankfully he was and then RTE tried to turn the tables on the Paedophile hunter who caught the Paedophile and accused him of a witch hunt.  Craven wanted a little girl for sexual purposes aged between nine and twelve – the sick dirty pervert who was head of RTE radio sports.  It is alleged that he received monies and a small pension but nobody has confirmed this, but if he has we are talking about taxpayers money yet again.  The Paedophile Rings sadly still operate in Dublin and beyond and it took the courage of the people of Fermanagh to come out and expose the wrongdoings and the cover-ups North of the Irish border.  We cannot forget Kincora and the scandals and the names who will never see disclosure.  I will close by saying our Children should come first in this country but sadly Zappone, Tulsa and company are more interested in PR and covering their own arses from their own blind failings, denial and negligence.  Fred  One more point:  this is essential for people who want to be aware of how vulnerable our children really are:  https://theukdatabase.net