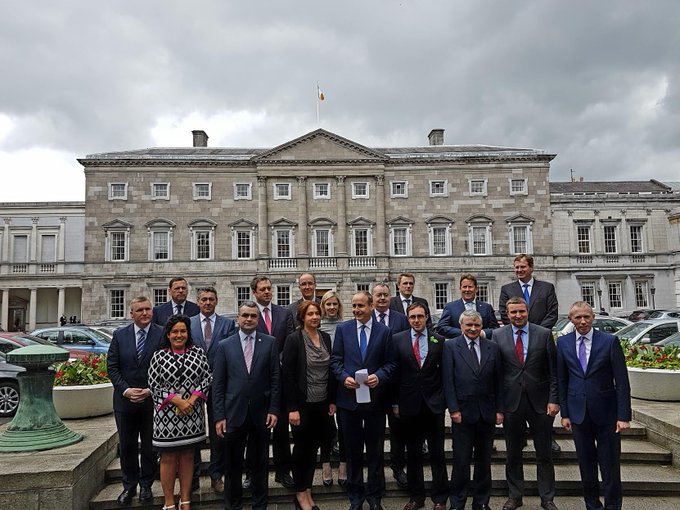 Fred says:  This is a photo of the actual “Fianna Failers” who have brought the Dail and the Irish political system to a new low last week.  To quote Ger Colleran, “Vacuous Idiocy from TD’s like the muppets above who are playing the Irish people for Fools”.  Martin is the weakest Leader in the history of Fianna Fail and to say he is the Opposition Leader is almost like saying – A Chimp split the atom, it was not Einstein.  Collins and Dooley have no way out; they are seen clearly on Dail Eireann Live behaving like scammers, where one hops in and one hops out and they want us to believe they simply made a mistake, a mere error of judgment.  Chambers pressed the button twice for Calleary and she is their Brexit spokesperson and a so called Barrister.  This in itself speaks dividends.  Jim O’Callaghan is like Lord Lucan; he is nowhere to be seen.  How do they have so much disrespect for the heart of the Irish Democratic House, Dail Eireann, in which many people died in wars against the British Empire to earn us our Freedom. It is so Insulting to everyone on this Island today.  People should be up in arms over this, but sadly Apathy is all around us? Dooley and Collins should not stand for re election? In the middle of all this we have Brexit, the Scandal of Homelessness, Gangland Feuds, Murders almost on a daily basis, add to this Massive Corruption in the Gardai, and other areas like Charities, and the rest. We need a Change in Politics in this Banana Republic urgently? Where from here? Well we hope the people wake up and get out and March. People have the power to change things, but they need to Awaken from the sleep of Apathy they are in at present. A December election, God Help us all.  Fred,

Independent TDs Michael and Danny Healy-Rae have missed more than eight out of every 10 Dáil voting sessions held in the last two years.

Figures compiled by the Irish Independent show that in the last two years the Kerry-based brothers have an exceptionally poor attendance rate for the weekly voting block that takes place every Thursday when the Dáil is in session.

The Thursday voting block – where multiple votes on legislation and motions that have been debated in the Dáil that week are held in one go – has been a source of controversy in the wake of the Votegate controversy where it was revealed that Fianna Fáil TD Niall Collins cast six votes for his absent colleague Timmy Dooley just over a week ago.

The newly compiled figures show that Danny Healy-Rae has missed more than 85pc of voting blocks on a Thursday in the past two years, showing up for just 11 of the 71 Dáil sessions held on a Thursday since September 2017.

The poor attendance of the Healy-Rae brothers, who are famed for their devotion to constituency work in Kerry, has been noted by many in Leinster House over recent years.

Their absence on Thursdays, including for last week’s voting block – the first since the Votegate debacle – was raised again by TDs privately this week. “They pretty much never vote on a Thursday,” one deputy said.

READ MORE: ‘Did alarm bells ring?’ – Niall Collins can’t recall who phoned him before he stopped voting for Timmy Dooley

Michael Healy-Rae admitted his record “would not be good” but argued that he has been paired with Fine Gael TDs on the last two Thursdays there have been votes in the Dáil.

“My attendance would not be good on a Thursday,” he said. “The best way I could answer it is I’m not idle if I am not there voting on a Thursday. Nobody will accuse me ever of abdicating on my political responsibilities.

“I take them very seriously and everybody in Co Kerry and around the country knows that I take politics very seriously. Whether it’s matters of local or national importance when I am needed by people, whether in Donegal or Kerry, I am there for them.

“I was on the phone to someone in Limerick, which is not even my constituency, dealing with a problem earlier. Tell me of other politicians doing that. I am doing my job in the best way I can and nobody could accuse me of abdicating or being negligent.”

Contacted separately, Danny Healy-Rae said he could not account for where he was on all of the days. “I am doing the best for the people I am representing and I can’t be two places at any one time or maybe three places or four places. I am trying to maximise myself and do my best for the people I represent,” he said.

“I am not complaining but other fellas live nearer [to the Dáil] and I don’t begrudge that. I have to decide and prioritise where I will be more effective and where I will be most needed or what’s more important to the people that vote for me.”

Both brothers pointed out that votes on a Thursday in the current Dáil have not been close and are often passed or defeated by large margins.

“In my father’s [Jackie Healy-Rae] time it was one or two votes to decide on whether legislation would go through. That is not the case now with new politics as we’ll call it,” Michael Healy-Rae said.

Danny Healy-Rae added: “Most of the votes that go through there, they are won by a margin of 70 or 80 and voting for something like that my vote isn’t going to make a difference.”

Fred asks is there a Sequel to Dumb and Dumber, Jim Carey?