The Galway West TD said she has never voted on behalf of a TD who was outside the Dáil chamber. 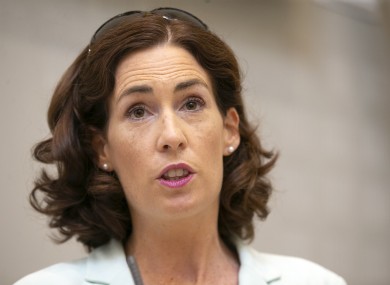 FINE GAEL TD Hildegarde Naughton has stepped aside as chair of an Oireachtas committee’s investigation into the ‘Votegate’ controversy, saying she too has voted on behalf of another TD.

Naughton is chair of the Oireachtas Committee on Members’ Interests and will remain in the position but says she will not be part of the investigation.

Speaking to TheJournal.ie, she said this is to ensure there is “not even the slightest perception of bias”.

In a statement this afternoon she explained:

“In light of legal advice received by the Parliamentary Legal Advisor, I wish to announce that I have recused myself from the investigation of complaints against four named deputies arising out of recent voting irregularity in Dáil Eireann. I will continue to remain as chair of the Committee on Members Interests but will take no part in this particular investigation,” Naughton said.

While the decision is not made lightly, it is one I am making to ensure the integrity of the process. It is vital that there is not even the slightest perception of bias in the proceedings of the Committee.

“The Taoiseach, the leader of the opposition and many other members of Dáil Eireann have voted for a colleague while asked to do so while that colleague was in the chamber. So have I, on less than a handful of occasions. I have never voted for someone who was not present in the chamber,” Naughton added.

The Galway West TD said the investigation in question relates to TDs voting while outside the chamber and that her actions “are in no way comparable”.

“That is accepted across the political divide, notwithstanding those trying to muddy the waters,”  Naughton said.

The Oireachtas investigation was launched after it emerged 10 days ago that Fianna Fáil’s justice spokesperson Niall Collins had pressed the voting button of his colleague Timmy Dooley in the Dáil six times in one session.

Dooley was outside the chamber when this took place and several other TDs made the lesser admission of pushing a colleague’s voting button for them while they were in the room.

Several Dáil investigations were launched on foot of what became known as Votegate.

Fred this Halloween night is totally bedazzled not by the little children dressed up for the festivities but by the audacity of Ms Naughton to appear on either The Tonight Show or maybe it was Prime Time advocating honour and ethics as a priority and admonishing Dooley and Collins while she too knew at that time her engagements with voting were also questionable.  What really surprises me is the lack of engagement of some of our Government members and this includes members of the Senate with Twitter?  Fred

If you never met Graham Freudenberg in life, it’s easy to feel you did.  As a speechwriter to some of our greatest leaders, including Gough Whitlam, Freudy climbed into the soul of the Australian Labour Party to find the words that lay there.  He came back with an entire language.

And while he may be gone, his words will stay with us forever.

May he rest in something far more wonderful than just mere peace.

In some way Fred takes this to be recognition of his writing abilities and who knows maybe Fred should be a speechwriter … I read recently that our standard of journalism in Ireland is diminishing and failing to report on the true social issues affecting vulnerable people in our society because journalists don’t want to upset the status quo and are seeking positions as speechwriters for prominent government ministers.