Garda Nicholas Keogh was cross-examined by counsel for An Garda Síochána. 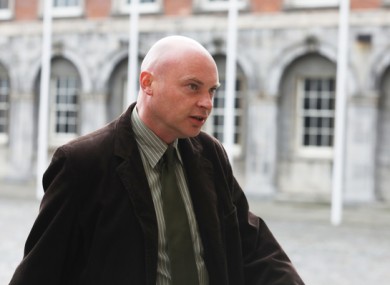 A GARDA WHISTLEBLOWER has told a tribunal that he has a “huge issue” on whether or not his complaints were being investigated in good faith because of an “incredible” admission by a heroin-dealer that was “sat on for five months”.

Garda Nicholas Keogh is giving evidence at the Disclosures Tribunal, where counsel for An Garda Síochána are cross-examining him.

The tribunal is in its third week hearing from Keogh, who alleges that a senior member of the Athlone drugs unit, identified to the tribunal as Garda A, was in an improper relationship with a heroin dealer, identified as Ms B, who had a then-estimated €2,500 a week income.

The tribunal, chaired by Judge Sean Ryan, is investigating if Keogh was targeted, harassed, undermined or bullied after he made his protected disclosure on 8 May, 2014.

The tribunal was hearing of Keogh’s complaint that a disciplinary investigation carried out by Assistant Commissioner Ann Marie McMahon had amounted to discrediting or targeting him.

Keogh told Judge Ryan that he believed that during the course of McMahon’s disciplinary investigation into members that she became obliged to make an arrest.

Shane Murphy SC, for An Garda Síochána, said that the “focus of Assistant Commissioner McMahon’s investigation was disciplinary” and that it was “not a criminal investigation”.

“It was not her job to make arrests,” he said.

Keogh disagreed: “It’s not as simple as that. This is a conspiracy to supply heroin. John Gilligan, I could be corrected, is the only person in this country convicted for something like this.”

Murphy said that “nothing” in McMahon’s investigation “required arrest” and her focus was solely on disciplinary matters, which she carried out “appropriately” and “diligently”.

“Miss B made a statement of admission in March 2018 – an incredible document,” said Keogh.

“That was sat on for five months and then passed to Detective Inspector Coppinger. That whole episode is massive. It was not acted on immediately and is an incredible statement in the whole sequence of events. It was a hot coal and they were juggling it,” he added.

McMahon made her disciplinary recommendations on 27 February 2019 and said in her statement to the tribunal that she had no information regarding interaction between Garda A and Miss B until 8 March, 2019, as it was with the office of the Chief State Solicitor.

“I still argue that it’s incredible,” said Keogh. “Assistant Commissioner McMahon makes her recommendation on 27 February 2019 and new information comes to light in March 2019? And, An Garda Síochána is, now, aware of the Disclosures Tribunal.”

The tribunal also heard of Keogh’s criticisms regarding a bullying and harassment investigation carried out by Assistant Commissioner Michael Finn, on foot of Keogh’s complaint.

Keogh made his formal complaint of bullying to Chief Superintendent John Scanlan in March 2017.

One of Keogh’s complaints centred on a report by Aidan Lyons who wrote in August 2014 that an Athlone man, Liam McHugh, had approached Lyons informing him of a conversation that he had with Keogh, which is disputed by Keogh himself.

McHugh was reported as saying that Keogh reminded McHugh of a time when McHugh was searched by three gardaí from Athlone Garda Station and relieved of €800, that Keogh was present and that Keogh would back up McHugh if he wanted to make a statement.

Keogh denies that the conversation or his role in witnessing a theft by gardaí ever took place. McHugh declined to make a statement because the incident of the theft “absolutely” never took place, he told Lyons.

Keogh told the tribunal that as soon as he was made aware of the report that he “contested it from day one”.

Murphy said that Finn was “scrupulous” in his investigation.

“Scrupulous?” said Keogh. “He might have found out the names of the other two guards.”

Ryan said the “essence of Garda Keogh’s complaint is that he was supposed to be drumming up or encouraging Liam McHugh to make a complaint”.

Keogh said “there was nothing to preclude them asking Garda Lyons for a statement but they didn’t pursue. If a Garda is requested to make a statement he is obliged to do so”.

Murphy said that Finn’s report found “no undermining, bullying or harassment of you and there was no evidence to suggest so”.

“Basically, someone was lying and they should have followed through,” said Keogh. “It didn’t suit their narrative. I said the report was false and maybe they should’ve investigated if the report was accurate.”

Gardaí in Roscommon are investigating a drug seizure last night.

Gardaí said that following on from investigations, warrants were obtained and searches conducted at a number of houses.

A quantity of cannabis and cocaine was seized with an estimated street value in excess of €170,000 (subject to analysis) and a large sum of cash.

The man and woman were arrested at two separate houses and are both currently detained at Roscommon Garda Station under Section 4 of the Criminal Justice Act, 1984.

Gardaí said that investigations are ongoing.

Fred says that the above Tribunal of the State and Whistleblower Garda Keogh brings many serious Questions to the fore. Somewhere in between lies some facts, but one would have to ask, Why would Garda Keogh put his Career on the line to go this far?  More importantly why would he risk his Health also? We would hope the people of Ireland have learned from the Sgt Maurice McCabe Scandal, and the Treatment he and his family suffered at the State’s dirty hands? Keogh will be called names, like a Drunk and the rest, believe me I know many serving Gardai who are serious Drunks and more who take the line of ?  Let us wait and see, how this Hearing concludes.

Also we have Drug Seizures in Roscommon, and Westport in Mayo, no big news here this country is sinking in Drugs, Where from here??? Fred.