about 14 hours ago Updated: about 13 hours ago 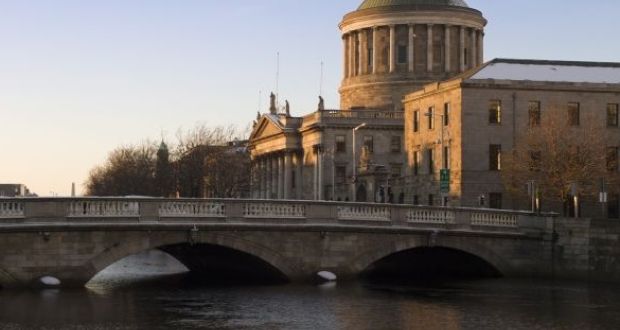 John Donald and Helena Flanagan, who the court heard have led blameless lives with no connection to crime, settled their action.

A solicitor and his wife were victims of a “catastrophic mistake” when armed gardaí raided their home in a search of a cannabis grow house, the High Court heard.

John Donald and Helena Flanagan, who the court heard have led blameless lives with no connection to crime, settled their action on Tuesday against the Garda Commissioner and the State over the incident on December 21st, 2012.

The court heard they were getting ready for work around 7.45am in their apartment at Chandler Court, Capel Street, Dublin, when the front door was rammed open.

Mr Donald had just come out of the shower, was brushing his teeth and just had a towel around him when he ran down the stairs to find a gun pointed in his face. He was told to put his hands up and “drop the f***ing toothbrush”.

The weapon was about six inches from his face, he said. “I could see the gun shaking in the hand of the man pointing it at me.”

That was the situation until a woman ran past him up the stairs and he could see the word Garda written on the back of her jacket.

Mr Donald was giving evidence at the opening of the action for assault, false imprisonment, breach of privacy and infliction of emotional suffering in the incident.

The defendants admitted liability and the case was before a jury for assessment of damages.

On Tuesday, Mr Justice Michael McGrath told the jury the parties had come to an agreement, the jury would not have to make a decision and were free to go.

Joe Jeffers BL, for the couple, was granted an order striking out the case with an order for the plaintiffs’ costs.

Earlier, Mr Donald, a partner in Arthur Cox Solicitors, told the court, until he saw the word Garda on the back of the woman officer’s jacket that morning; “I thought I was going to die and they were going to kill Helena or me.”

He went back upstairs where he saw his wife trying to cover herself with a towel as she shook uncontrollably and cried. “I had never see that look of utter terror on her face before.”

Gardaí took him into the master bedroom where he was told to put on his clothes and his wife was taken into the bathroom before a robe was obtained for her.

Gardaí asked was there “anything in the apartment they would not want to find” and Mr Donald replied no.

“At this stage I knew they were gardaí and they had made a terrible mistake.”

When Mr Donald looked at the search warrant, it said “apartment at the back of building”, did not have names on it or the number. He said, as the gardaí left, one of them said; “You can use this to get the rest of the day off”.

At a later meeting in Store Street Garda Station, there was no apology and a refusal to provide a copy of the search warrant, the court heard. The couple were told it was “a live warrant” which worried them it could happen again and they had to threaten legal action to get a copy of it.

They went away for Christmas but never returned to the apartment, their first home, because “we could not feel safe.” They got rented accommodation. They now live in Dún Laoghaire.

The incident caused both of them to have nightmares, affected their relationship and “threw our lives into chaos for a number of years,” he said.

John M. Fitzgerald SC, for the State, said this was “admitted to be a catastrophic mistake” where gardaí were looking for a marijuana growhouse.

Asked whether he heard officers shout “gardaí” before coming in, Mr Donald said he did not. Had they done so, he would have heard them in the two bed apartment, he added.

Reading the above (says Fred) is like reading from something out of the Marx brothers – a day at the Races.  The sad point here is they went to the wrong race!  How could a bunch of clueless Muppets wearing the Uniform of the State as Gardai, terrorise an innocent professional couple in their own home in the early hours of the morning.  Not alone did they break the door in at the wrong address but it is hard to comprehend that they came with a warrant which did not state the correct address or for that matter the apartment number.  To be in your own bathroom and your wife in bed and a gun put to your head is like something you would read about in Mexico or Columbia but this is Ireland and believe me we are on the same stage now as the two countries mentioned (drug cartels).  This couple:  had their bodily integrity violated not to mention their character and their neighbours I am sure hearing the chaos around them have their own views as to what happened.  Yes it happened in 2012 but I am sure Drew Harris (Commissioner) will do a full inquiry into this.  As Mr Donald said, a senior Partner in Arthur Cox (Solicitors) said, “he was scared for his life because the keystone cop holding the gun had a shake in his hand”.  Too add to this, his wife was terrified and screaming in the bedroom.  As I said before, some of our Gardai are not just unprofessional; they act like Thugs.  Imagine knowing they had made a mistake.  One of the Muppet Gardai turns around and says sarcastically “sure you can take the day off now, you have been through enough”.  How could anybody respect a Police Force behaving like this.  Again we must acknowledge that it is the taxpayer has to pay the costs of this fiasco and for the settlement made by the court because of the atrocious behaviour of the Muppet Cops.

I will close by asking will any of these cops get the exit door.  Probably in the last 7 years some have been promoted to act as even Bigger Muppets.  Respect has to be earned and you can have Crime Call after Crime Call and beg for help and cooperation from the public but this kind of behaviour and a false sense of power gets people to turn their backs on the Irish Police Force sadly.  I commend Harris today on the arrests in relation to Derrylinn but there is a long way to go and at least there is progress being made.  There are some good cops out there but sadly there are so many bad eggs who can rot the whole basket.  To be continued.  Fred