Updated / Monday, 11 Dec 2017 19:48
There has been no provision in law since 2010 for a judge to allow a guilty defendant to escape penalty points and a conviction for a penalty points offence (such as speeding, holding a mobile phone while driving, no insurance, careless driving, dangerous driving and dozens of others).In 2014 the High Court ruled that “the District Court enjoys no jurisdiction to impose an informal sanction such as accepting a donation to the poor box, as this would amount to an indirect circumvention” of the law. Yet we observed the practice continuing with some judges. 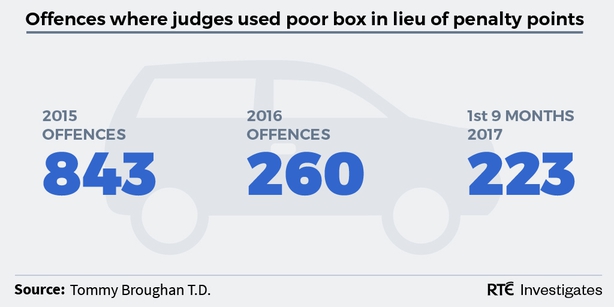 The Minister for Justice has expressed concern over the operation of the court poor box in cases where penalty points should be applied.

Charlie Flanagan described the practice as “inconsistent” as he responded to a question on promised legislation from Fianna Fáil leader Micheál Martin.

Minister Flanagan said he spoke to the Minister for Transport Shane Ross on the issue this morning.

He said both departments will “sit down at an early date” to ensure that a long awaited consolidation of the road traffic legislation.

The practice was found by the High Court in 2014 to be a circumvention of the law.

The High Court ruled that “the District Court enjoys no jurisdiction to impose an informal sanction such as accepting a donation to the poor box, as this would amount to an indirect circumvention” of the law.

But even after that High Court ruling, 843 penalty points cases were dealt with by poor box in 2015.

The number fell to nearly 258 in 2016 and 223 in the first nine months of this year, according to Courts Service figures supplied to Independent TD Tommy Broughan.

The RTÉ Investigates programme https://www.rte.ie/news/primetime/2017/1212/926909-rte-investigates-law-and-disorder/ highlighted examples of the poor box being applied in the cases of two defendants who were before the court on charges, including dangerous driving.

In one case, a man before Dundalk District Court on 19 traffic-related charges had all charges struck out on payment of €5,000 to a charity.

Where the poor box is applied no conviction is recorded, so the defendant will not receive penalty points or a driving disqualification.

In a statement issued prior to last night’s programme, a spokesperson for the Minister Ross criticised the statistics provided by the Courts Service that were used in the programme.

They showed that only 58% of drink drivers who came before a court were convicted. The percentage of successful convictions fell to 48% once the number of drink-driving summonses issued but not served were taken into account.

The spokesperson stated: “The statistics given, as provided by the Courts Service, which are the subject of the RTÉ Investigation programme, are per annum and therefore are totally misleading.

It is not clear what statistics Minister Ross was referring to but the drink-driving figures used in the programme are not related to the length of time a prosecution takes.

Minister Ross’s spokesperson also claimed that: “The true figure is that approximately 85% of drink-driving cases that come before the courts result in convictions.”

The figures referred to by Minister Ross are for cases that do get to court and are heard by a judge, but they do not include the figures for summonses not served by gardaí or the figures for cases struck out or dismissed for a variety of reasons.

A spokesperson for the Courts Service has confirmed to RTÉ Investigates that when the figures for summonses not served and cases dismissed or struck out the conviction rate drops to 48%.

Fred becomes the Legal Beagle!  Our court system is totally a shambles.  Just by accident I recorded the Prime Time Investigative programme https://www.rte.ie/news/primetime/2017/1212/926909-rte-investigates-law-and-disorder/ which listed over 64 district courts across the Republic and how they deal with speeding offences; penalty points; and then we can never forget The Poor Box which also means the exit door of walking out of a court completely free of any conviction!  Why? Because the defendant put his hand in his pocket and put a few hundred and in some cases even five thousand to a charity of the Judge’s choice which is completely illegal according to the Supreme Court ruling in 2014.  The saddest case was the non national individual who knocked down in a hit and run a Kildare Co. Councillor, a family man and highly regarded.  This individual driver had been stopped months previously and summonsed to court but somewhere along the legal bureaucratic system of law, the summons became invalid.  If the Gardai (and I am not blaming them) were properly educated in Templemore and the red tape strangling the administrative system of law in this country was dealt with immediately, this man, a father and husband, would be alive today.

RTE Investigates also showed a remarkable comparison between Mayo and Kerry decisions.  Mayo had around £9,000 paid into the Poor Box whereas in Kerry it nearly reached £500,000.  You would have to ask a simple question – what mindset does the man have sitting on the Kerry bench?  The programme showed clearly that the court system is a complete and utter JOKE.  In an another case, it showed a Judge postponing a case as many as 47 times.  It turned out that it took nearly four years to hear the case – a simple road accident case and when I say simple – there were no fatalities just sheer incompetence on behalf of the court.  Frank Buttimer, solicitor, stated in the programme that it does not take rocket science to sort this out.  Time to cut out the bullshit and make it simple – We could learn from Judge Judy in the US and in cases from across the Irish sea.

Sadly the programme exposed Ireland again and our legal process as if we were back in our Brehon law system with Judge Fred Flinstone presiding.  On a serious note and a most tragic one, lives were lost due to this chaos because almost 40% of summonses were not served.  The Gardai gave one statement; it was hard to track down the people who were to receive summonses.  This excuse is totally unacceptable when you see a young boy in court for being hungry and stealing a bottle of orange and a chocolate bar.  Fr Peter McVerry referred to this in a letter to the papers as a “Tale of Two Cities”. Fr McVerry for decades must be facing our courts with vulnerable people and representing their case in our courts; he is a man that Mr Flanagan of Justice should be meeting with to discuss reality living and the district court system.  I would also suggest that Judge Patwell’s learned recommendation of removing the onerous tasks of appearing in court from An Gardai Siochana and appointing a State Solicitor in the area of the courts and Garda jurisdiction, is common sense.  There are so many legal technicalities now; it is becoming a game of cat and mouse and the mouse wins as the cases get thrown out of court.

During this time we must not forget the courage of Maurice McCabe in relation to penalty points and speeding fines.  To use the words “If you knew a Superintendent or higher – the wink and the nod deleted your speeding charges”  This could be done with greatest simplicity.  The question now how far have we really progressed when one seriously reads the figures stated above.  It is with too much ease that people say the district court is the workhorse of criminal justice; it is not efficient so therefore can be ineffective in the delivery of true justice.  Fred