Delaney lived the high life while football clubs across the length and breadth of Ireland were starving from lack of funds, finances and support.  I would love to know the views of Denis O’Brien today who paid half the salary or maybe the full salaries of Irish managers and we know he never got even a “Thank You”.  We all have our different views on O’Brien and so have I and I am not necessarily a fan but I have a completely different view of the Clown in the photo above.  What other country in the world would allow a man who was allowed to financially bankrupt an entire football association and then get paid almost a half million for succeeding.  We don’t even know because there is no audit at present to find out the exact debts that the Delaney has left in his legacy to the FAI of Ireland.   Ross – I am asking you now a direct question:  Who sanctioned and signed off on the payment above?  Somebody somewhere needs to stand up and start asking the pertinent questions?  I  would also love to know Roy Keane’s view on all this.  I am not really interested in relation to Eamon Dunphy who blows hot and cold at the best of times but to be fair Eamon won’t kick anyone when they are down and believe me Delaney is incapable of being down.  So the legacy of John Delaney reminds me of the movie Black 47.  The Clubs are starving for cash and he has caused the Famine.  I say again this is Ireland because no other country would tolerate this trickle down destruction of an entire Football Association.  Fred

Time for an update: 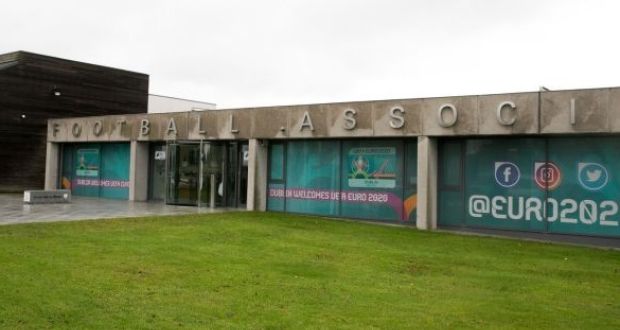 FAI HQ in Abbotstown. The organisation released their accounts on Friday which showed debts of €55 million. Photo: Gareth Chaney/Collins

The Football Association of Ireland, Minister for Sport Shane Ross and Sports Ireland have been invited to an emergency meeting of the Joint Oireachtas Committee on Transport, Tourism and Sport to discuss the crisis enveloping Irish football.

The invitation was issued by the chair of the committee Fergus O’Dowd and the meeting is set for this Wednesday.

The request comes as accounts published by the association on Friday showed the association, which employs 200 staff, has liabilities of €55 million and its auditors, Deloitte, have declined to express the opinion that it is a going concern.

The accounts also show that the former FAI chief executive John Delaney would have been paid almost €3 million during his final three years as an employee, far more than previously thought.

The figures show that in addition to his annual salary of €360,000, Mr Delaney (52) would have been due pension contributions worth €285,714 a year and assorted other benefits, bringing the total value of the package over the period in question to €2.943 million.

On Monday a former president of the FAI described the association’s financial situation as “drastic” and warned their liabilities could be “close to €80million.”

Brendan Menton, who is an economist, also served on a number of Uefa committees. He told RTÉ radio’s Today with Séan O’Rourke Show he was “fearful” of the association’s plans for refinancing the organisation.

Mr Menton said he had examined the accounts in detail over the weekend and believed the liabilities could be closer to €80 million.

He said the FAI needed to involve “all the stakeholders” in a bid to resolve the funding crisis.

“They need to say what their business plan is and get the sponsors, the Government, Fifa and Uefa on board. They don’t have the capacity to do this themselves.”

The FAI’s brand is seriously damaged, he added. There appears to be “a reluctance” and “very little progress” in efforts to resolve the association’s problems. “We are nine months into the crisis, six months on from the Government review.

“The FAI needs to come up with a business plan, they need to put it in the public domain and show they can achieve solvency. What is the timing of this plan? It should have the approval of the new independent chair and directors. It needs Government intervention.”

When asked if the association should change its name and start afresh, Mr Menton said he hoped a new independent board of directors and chairperson could provide leadership and restore the brand as it moves to celebrate its centenary in 2021.

“The clubs are the strength of football. They are not dependent on the FAI. Ninety nine per cent of development is done through community involvement and sports capital grants.

“My advice to clubs is to keep calm and carry on.”

One solution being examined by Minster for Sport Shane Ross

funding to them directly, rather than being dispersed by the FAI.

Fred says and guess what …. Who will not be available to attend the meeting?  Yes, who?  Minister Ross.  Why?  Maybe he was better in the position of Stockbroker but fixated by the alleged corruption in FAS and other state funded bodies who sunk so low as to indulge the greed of the elites at the expense of the serfs.  Feudalism comes to mind.  Now under his watch as Minister we see our players at local grassroots level been treated like serfs who deserve no respect for their contribution to soccer as a sport in Ireland because the Feudal Landlord abused his position and we know by the fact that Deloittes have jumped ship, that there is most likely a whiff of corruption about this scandal.

Claire Byrne Live show, RTE 1:  There was a strong implication through a reference to Joe Delaney, father of John Delaney, which basically said that nothing, absolutely nothing was learned from father to son and scandal to scandal.  http://www.soccer-ireland.com/irish-football-history/merriongate.htm