Judge Seamus Hughes made the remarks at a sitting of 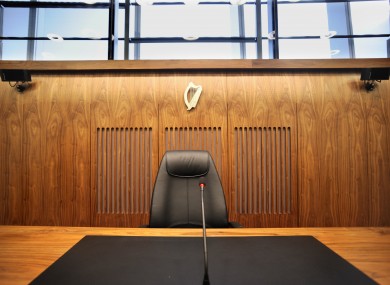 A JUDGE HAS said he will not allow a number of families caught up in spiralling feuds to “hold a town to ransom” after eight men were remanded in custody following a violent street row in Longford yesterday morning.

Judge Seamus Hughes made the remarks at a sitting of Longford District Court today after a number of men from rivalling Traveller families became embroiled in an unseemly incident in the midlands town barely 24 hours beforehand.

“I won’t allow a small group of men hold this town to ransom,” he said. “It won’t be tolerated any longer.”

Judge Hughes said he had viewed the incident, during which bricks, bottles and other implements were thrown between the two feuding families, causing members of the public to duck for cover.

The judge said the incident, together with several other feud-related episodes of its type was threatening to undo all of the positive efforts which had been made by various agencies to promote the town as a shopping destination in the lead up to Christmas.

“I have never in my 11 years on the bench seen so many gardai present,” he snapped.

“There must be 20 gardai in here, you have the Armed Support Unit patrolling the town too and all of this in the week before Christmas.

“What man, woman or family will come in with a wallet of money to do their Christmas shopping when they witness the like of that?”

“I want to tell the families today to bury the hatchet and I want to send out a strong message that this type of behaviour will not be tolerated by Judge Hughes.”

The charges, relating to alleged offences for Section 6 public order also included Section 9 Firearms and Offensive Weapons charges, and included allegations of the possession of various articles including bricks, pitchforks and iron bars.

All eight men are due to reappear before Longford District Court on Friday.

Judge Hughes hopefully is the first of many Judges to lay down the law in its full due process to take on these Gangs.  They run Ireland, village and town, through fear and intimidation but Judge Hughes now has shown that He will take no more and the town of Longford will not be held to ransom by these drug Thugs.  Harris and the Minister would also need to increase the protection of Judges like Judge Hughes because these Gangs have no fear about who they intimidate or for that matter choose to shoot.  Don’t ever fool yourselves that these Drug Lords would not ever have a threat put against a member of the Judiciary, believe me they would – these Gangs are way out of control at present.  Gardai must break down doors, they must follow the money, they must freeze the Gangsters’ assets (CAB can do this) but more importantly they need the help and assistance of the people of Ireland.  We do not want to lose a generation of young people in Ireland.  Fred