A woman’s hair was set on fire by a gang of teenage thugs during a night of chaos on the Luas Red line.  Many residents in Dublin’s south-central area are said to be afraid to use public transport following almost “daily occurrences” of anti-social behaviour and attacks in the area.

A serious incident was reported on the Luas Red Line on the night of January 11 by the tram’s driver while en route to Tallaght.

Luas operator Transdev has since apologised for its security’s “unsatisfactory” response time after a passenger’s hair was set alight by a number of youths. In a further report, the driver said the teenagers responsible were smoking and making racist comments, which prompted him to call for security again.

Rising gang violence has seen armed officers sent to Longford – but is the Garda crackdown working?

TheJournal.ie visited Longford this month to talk to locals, gardaí and local representatives. 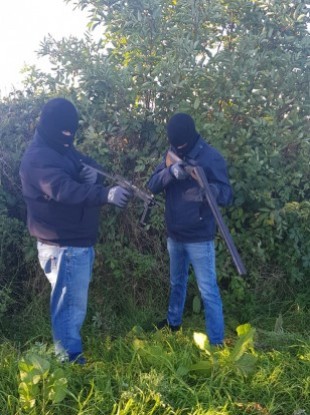 A screengrab from a video sent by one of the gangs earlier this year.
Image: TheJournal.ie

WITH AROUND 40,000 residents, Co Longford is one of the least populous counties in Ireland.

Barring the sort of incidents typical in any rural county – like public order offences and burglaries – the county has not generally been regarded as an Irish crime hot spot in recent years.

So, when armed gardaí turned up on Longford Town’s main street in June of this year, it’s fair to say some locals were a little taken aback.

The specialist gardaí had been deployed to respond to rising violence between rival gangs that has seen participants firing weapons at each other, throwing fire bombs into homes, torching cars and carrying out other targeted attacks.

The gangs aren’t based in the town itself, but many of the flashpoints of the feud have been in and around the greater Longford Town area.

The violence has continued over recent months: in September, gardaí were called to four different violent incidents, including one serious stabbing; in December, videos were shared on social media showing a major brawl involving upwards of 15 people.

Gardaí have arrested a number of people in relation to that incident and nine are now before the courts.

TheJournal.ie visited Longford this month to talk to residents, gardaí and local representatives about the continuing violence and the Garda response.

The feud, which has its roots in a disagreement between two families belonging to the Traveller community, has spiralled out of control in recent years, according to Garda David Conroy, the Garda Representative Association (GRA) local spokesperson.

He said morale was at an all time low in the area, and that there was a need for more resources to tackle the problem as well as a proper policing plan.

“I don’t think it’s exactly too much to ask that we have a well-staffed and resourced region.

“Longford is an area which is served by a number of national roads. The people carrying out these attacks know how to get in and out as quickly as possible.

“We hear things on a sporadic basis. It’s not as if we know exactly when something is going to happen.

In an ideal world, we’d have patrols active to go to areas that are more likely than others to be targeted. For us, we can’t do that if we don’t have people in place.

The feuding gangs are also heavily involved in the drugs trade and operate with both Lithuanian and Polish criminal organisations involved in drug trafficking.

Gardaí believe that the feuding gangs responsible for much of the violence in Longford often work with the European groups to move drugs across the midlands and west of the country.

Cocaine, cannabis and methamphetamines are the main drugs trafficked by these gangs.

Many of these European gangs have been operating in Ireland for years and have recently moved westwards to find below-the-radar rural areas to grow cannabis.

Garda drug units responsible for the area continue to use the best resources available to them to tackle the problem. However, many of these growhouses are located in extremely rural areas where garda cover is minimal.

Two national roads – the N4 which serves Longford town, and the N6 which crosses the country to the south of Longford county – provide quick access to Dublin and to other urban areas for the criminals involved in the trade.

To effectively police the area, local officers have been asking for the garda helicopter to be deployed over the Longford region as the air support unit has infrared technology which is capable of picking up heat signals.

There’s a lot going on in this area, not just the feud. We do get help from national units but there are times where we need to have those resources in place and not have to ask for that support.

There’s so much more we can do to tackle drugs and drug gangs in this district.

There has been increased demand for HSE addiction services across the midlands region, according to experts working in the sector, as more drugs flow within the area.

Fran Byrne is the regional manager of CADS (Community Alcohol & Drug Service)  Midlands region. She said that there has been an increase in demand for services in the last few years and that the body has joined budgets with other services in a bid to serve as many people as possible in the community.

She said: “Demand has increased in most areas over the last five years and a demand for under 18 services was also identified.”

Byrne added that to make the service as accessible as possible, the HSE amalgamated the budgets of CADS with the Midlands Region Drugs and Alcohol Task Force (MRDATF). She said this was done to reduce any potential overlapping or duplication of services.

She added that this move made it possible to provide services in more rural areas.

Longford’s drug problems have long been a source of concern for local politicians.

Local Fianna Fáil councillor Séamus Butler has been outspoken about the gangs active in the trade. In the past, Butler has likened the warring factions as the “Escobars of Ireland”. He has also called on CAB to probe the lavish wealth of the gangs operating in the region.

It is understood that the bureau is now taking steps to seize money and assets from the gangs, who have long been flaunting their wealth online.

Meanwhile, latest figures from the Joint Policing Committee in Longford showed how gardaí have carried out thousands of patrols since violence erupted in the town last year.

Gardaí in Longford have also carried out “5,500 high-visibility engagements” in this period, according to a report carried in the Longford Leader earlier this month.

There has also been an increase in the number of patrols in the Granard area in the north of the county, which local Superintendent Séamus Boyle said had resulted in an increase in drug detection rates.

When TheJournal.ie visited Longford this month, there had been a reduction in the number of serious incidents relating to the feud and drug related violence.

The locals, however, were not afraid to share their opinions with us. Many slammed the lack of officers on the street, while some business owners said that the feuding gangs had had an impact on their trade.

One man TheJournal.ie spoke with has been living in Longford Town for the last 15 years. Originally from another county, he said that he had moved to the area to start a family.

He has worked in a number of pubs in the area and said the warring gangs were now ruling the roost without fear of being caught.

He said: “These lads are doing what they like. They’re coming into the shops, taking what they want, beating each other up and just doing whatever comes to hand. I am sick of it really.

“When you’re working in the pub, you hear all the chat. They’re all at it and it’s giving the area a bad name. I know some of the lads, the locals here, who would have come in for a pint in town that don’t bother anymore. They’re not wanting the hassle.

I know a few of the guards around here as well. Decent men. They can only do so much with what they have is the thing. A tough job.

While the armed garda units are not on the streets as often as they were during the summer, gardaí based in Longford say that the elite officers are just “one serious incident” away from returning in force.

According to an article by Kitty Holland, Social Affairs Correspondent, Irish Times, that a small number of  young people in Inchicore are mobilising to cause “type of criminality that has plagued other parts of Dublin”.  According to an unpupblished source, it extends to 25 families involving more than 50 children and 11 of these families fall within the drug provision and culture spectrum.  These are the children who struggle with our education system and often don’t even attend school.  Irish EscoBars need to identified, stripped of their wealth by the CAB, and placed in prison for sufficient time to ensure that market supply of drugs is obliterated.  Fred asks people to engage with the knowledge that exists through technology to try and tackle this crime epidemic that is destroying our young population and that poly drug culture where people are in their forties and on methadone for over a decade and who just add another drug to the mix and die.

Dr Sean Redmond from University of Limerick is the link for today:  This report is only published.  “How Irish crime Gangs are a Threat to child well-being https://www.rte.ie/brainstorm/2018/0306/945355-how-irish-crime-gangs-are-a-hidden-threat-to-child-well/