A €20,000 bounty has been put on the head of a former associate of a biker gang linked to the Kinahan cartel – and €16k has been offered to kill a younger associate, the Herald can reveal.

The Wexford-based men have “gone to ground” in recent days and are refusing to co-operate with a huge garda investigation into the Crumlin-based biker gang which is threatening them, senior sources have revealed.

The older suspect became a target for his former allies after they accused him of stealing cash and attempting to set up an “independent biker club”.

He was the alleged victim of an incident in Clonroche, Co Wexford, at 10am on January 9, in which a gun was pulled on him by biker gang members who were attempting to get cash from him.

The target had to flee the country a number of years ago because of threats from the Kinahan-linked biker gang whom he previously associated with.

While he was warned by gardai of an active threat against his life on that occasion, officers have not yet issued him with a new GIM form.

However, sources say he has been keeping a “very, very low profile” since the Clonroche incident.

“While the focus of many observers of organised crime in this country has been on Drogheda in recent weeks – this matter is also a real live and dangerous situation,” a source told the Herald.

“This individual, who is aged in his 50s, is under serious threat from a very dangerous gang.”

After the Clonroche incident, four members of the biker crime group, aged between their 30s and 50s, were arrested on the motorway near Naas, Co Kildare, on suspicion of making threats to kill with a firearm in Co Wexford.

The biker crew members were arrested by the Emergency Response Unit (ERU) as they were on their way back to the capital. However, no firearm was recovered.

Investigators are checking to see if another gang member returned separately with the weapon and was able to go undetected.

The four suspects, including the suspected leader of the biker gang, spent a number of days being questioned in custody by gardai before being released without charge.

As they were being questioned gardai searched their Crumlin headquarters for firearms.

The ERU was called in to secure the property before gardai attached to Sundrive Road and Crumlin garda stations made the search in an operation led by the Drugs and Organised Crime Bureau.

A quantity of cannabis, a van and two motorcycles were also seized during the course of the search.

The biker gang is linked to the drug trade in Dublin and the south-east and has been a prime target for local gardai in recent years.

In that operation, dozens of knives and three imitation firearms were seized.

The group came to prominence almost four years ago, when a number of its members led the funeral cortege of David Byrne (33), who was gunned in the Regency Hotel as part of the Hutch-Kinahan feud.

Ireland has Feuds literally in every nook and cranny of this Island, not to mention what secrets the sea holds.   Shots fired at unarmed Gardai show these Gangs will not hesitate in shooting anybody, even Gardai. Where will it all end, hopefully no more lives will be lost?  Perhaps it is time to accept the offer of Ross Kemp in our lawless gang oriented Republic of Ireland, with legislation in place to arrest the gangsters wreaking havoc at huge financial gain to themselves.  https://www.independent.ie/irish-news/ross-kemp-id-cover-dublin-gangs-if-i-get-access-and-dont-get-killed-29917059.html

Ross Kemp has visited North of Ireland and has a view on Gangs. 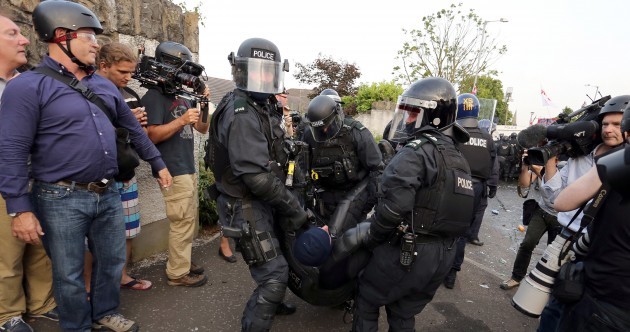