The jeep was involved in an incident late last month. 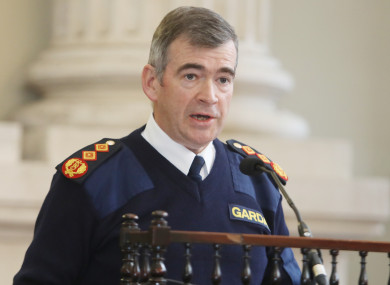 GARDA COMMISSIONER DREW Harris said he cannot clarify why he took a PSNI jeep carrying armed officers from the North to Garda HQ due to security concerns.

Harris was travelling back from the North to the Phoenix Park in Dublin last month, where he would usually have transferred to an official garda vehicle after crossing into Ireland.

However, he remained in the unmarked PSNI jeep all the way back to Dublin.

Speaking at the Association of Garda Sergeants and Inspectors (AGSI) conference in Cavan, Harris said he could not talk about the incident.

“I am the garda commissioner and regrettably because of the lifestyle threats have been imposed on me and because of this I receive security. It is not a position that one would volunteer for but the same time does directly relate to my security and the security of my family. I do not wish to comment any further on this.”

Harris was also drawn on the ongoing controversy within the AGSI and said he hoped the matter would be resolved.

It emerged late last week that two separate protected disclosures were made in December last year alleging serious malpractice against a member of An Garda Siochana who is also a member of the AGSI.

The allegations contained within the protected disclosures allege that the AGSI member took on part-time work outside of their duties – something prohibited under garda rules.

The National Bureau of Criminal Investigation is understood to be carrying out an investigation. It is being alleged that the garda carried out consultancy work for a business with a multi-million euro turnover.

Speaking today, Harris said: “It’s been dealt with, it’s been dealt with expeditiously and I would hope soon to see the papers in respect of that and obviously I would wish to study those carefully and make an objective decision based on those papers.

“The hypothetical is so close to the suggested allegations that I can’t comment.

“The question of discipline in an organisation, particularly a policing organisation, such as ourselves, is a very important one.

“We are here, we are public servants, they have a rightful expectation as to what our behaviours are and in the end we as An Garda Siochana should be able to be trusted to the ends of the earth, and I want to make sure that our behaviours within the organisation are exemplary and demonstrate that.

“So in my approach to this I will consider obviously all the facts and I also consider what is the public impact of an individual continuing to serve as a garda member.” 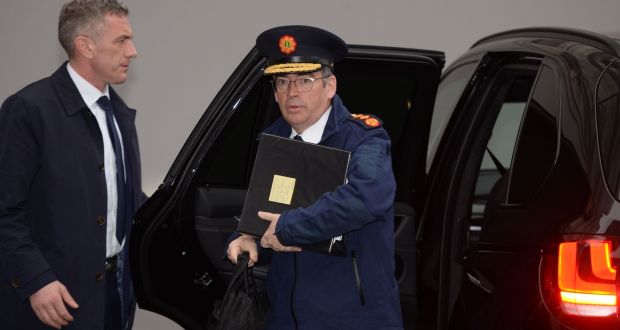 Garda Commissioner Drew Harris: security has been significantly stepped up for Mr Harris due to his previous role in the PSNI and the suspected threat from dissident paramilitary groups. Photograph: Alan Betson

Mr Harris had been attending an appointment in Northern Ireland on March 25th and was being driven back to headquarters where he currently lives.

The commissioner, who previously served as the PSNI’s deputy chief constable, is accompanied by armed officers at all times on both sides of the Border.

In the Republic, gardaí from the Emergency Response Unit (ERU) are responsible for his security while in Northern Ireland he is accompanied by PSNI close protection officers.

On March 25th, Mr Harris was driven to the Border by armed PSNI officers in a specially reinforced, unmarked Range Rover which was met at the Border by a Garda ERU vehicle.

Mr Harris remained in the PSNI vehicle which drove in convoy with the ERU vehicle to Dublin.

When the vehicles arrived at headquarters, a garda at the security kiosk allowed the ERU vehicle to enter. However, she didn’t recognise the unmarked Range Rover which had a Northern registration plate.

Fearing a security threat, she activated the security bollards at the entrance which speared the bottom of the car and damaged the undercarriage. No one was injured in the incident and the vehicle is undergoing repairs.

Gardaí have refused to comment on the matter except to confirm an incident on March 25th. “However, for operational reasons we won’t be commenting further,” a spokesman said.

The PSNI said both it and the Garda were “content normal procedure was followed”.

A PSNI spokesman said when either force carried out duties in either jurisdiction, “it is within the law and with full permission and knowledge of the host service”.

Mr Harris, who is originally from Co Down, is a frequent visitor to Northern Ireland.

PSNI officers are not permitted to carry firearms in the Republic. When Mr Harris became commissioner in September, the Garda and the PSNI agreed to draft a memorandum of understanding on how to handle his security arrangements.

However, it is understood this has yet to be completed.

“My understanding is that, contrary to standard procedure, Commissioner Harris did not change between PSNI and Garda vehicles at the Border and continued to Dublin from the North in the PSNI vehicle,” Sinn Féin justice spokesman Donnchadh Ó Laoghaire said on Sunday.

“This raises a series of questions about why standard procedure was abandoned, whether the gardaí on duty at the Phoenix Park were informed of this and, if not, why not?”

He called on Mr Harris to “immediately make a statement and clarify this matter”.

The heightened security required for Mr Harris has created several headaches for him and the Garda since he took up the post six months ago.

While previous Garda commissioners had always received some level of security, this had to be significantly stepped up for Mr Harris due to his previous role in the PSNI and the suspected threat from dissident paramilitary groups.

His father. Alwyn Harris, who was a superintendent in the RUC, was killed by an IRA car bomb at the height of the Troubles in 1989.

The commissioner lives with his wife in a residence on the Garda Headquarters grounds in the Phoenix Park in Dublin while security work is completed on a private residence elsewhere.

Last year, Mr Harris’s wife was told she could no longer walk their dog in the park due to security concerns. A garda was assigned to walk the animal daily.

Fred concludes:  Between the salary for Drew Harris; his around the clock protection (not just by Garda officers but it seems that PSNI/RUC officers are allowed drive through the Republic, guns in hands) and many more perks.  Now we find out that the Special House with all the security provision will soon be soon left empty because Drew will be leaving for a bigger abode closer to HQ in the Phoenix Park.  It is ironic that the cost of this man is enormous and yet it is “carry on regardless”.

Watching Drew Harris doing press conferences is like watching a tortoise in a greyhound race because he seems to be like a mini statute of King Billy; he has never answered a direct question or given a direct answer in his 15 months as Garda Commissioner and then last week, out of the blue, came a new transformed Harris with the two lines “Sinn Fein and the IRA”.  The mind is baffled.  I again repeat the timing of the Statement is as obvious as Micheal Martin’s dislike of Bertie Ahern.  So let us recall a few high profile concerns at present: