An Garda Siochana is refusing to say if a Public Order Unit garda who was given a 12-month suspended sentence yesterday for assaulting an RTE cameraman has been sacked.

When asked if Lucey is still employed by An Garda Siochana, a spokesperson for the force said it does “not discuss or comment on matters of internal discipline”.

The refusal to comment comes after Mr Hand said he was pleased with the ruling, but hopes “lessons will be learned” from the incident.

“I have enormous respect for the gardai. Through my work as a cameraman I see every day the important and difficult job that they do,” he told the Herald.

“However, it is vital that journalists, photographers and camera people are able to cover protests and public-interest events without fear of attack.

“I’m pleased with today’s outcome and I look forward to putting the incident behind me.

“I’d like to thank Judge [Melanie] Greally for her considered judgment, and Stuart Duguid from the Garda Siochana Ombudsman Commission for his professionalism and fairness in investigating this case.

“My thanks also to all of the witnesses in the trial, in particular those who shot videos of the assault and were brave enough to come to court and stand behind them.”

Lucey, who has been stationed at Crumlin Village and Sundrive Road garda stations, had pleaded not guilty at Dublin Circuit Criminal Court to one count of assault causing harm to Mr Hand at Cathedral Street, Dublin city centre, on February 6, 2016 and to damaging his camera.

Following a five-day trial last December, a jury convicted him of assaulting Mr Hand and acquitted him of criminal damage.

Lucey stepped out from a line of Public Order Unit gardai and struck the camera of Colm Hand, an experienced RTE cameraman covering the protests.

He then swung his baton with full force and struck Mr Hand to the groin.

Judge Greally rejected a characterisation by Lucey of the assault on Colm Hand as an error of judgment and excessive conduct.

She said Lucey’s statement of regret fell short of an apology, and an offer to make a donation to a charity of Mr Hand’s choice did not represent a suitable gesture of remorse.

“There are public interest issues at play in this case. A transgression of this kind must be seen to carry serious consequences,” she said.

The judge added that she would suspend the prison sentence on the basis of Lucey’s absence of previous offending and his unblemished record of service with gardai.

Judge Greally said that given these facts, she viewed Lucey’s offending as an aberration.

Gardai release two after protest at US Embassy – Irish Times

Oct 13, 2001 – Two men arrested for public order offences outside the US Embassy in Dublin have been released on bail. A garda spokesman said the men …
www.irishtimes.com › news › gardai-release-two-after-protest-at-us-e… 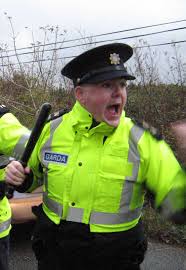 Just look at the anger in the above idiots face, sadly he is wearing a Garda uniform and what is in his hand – a dangerous weapon called a baton.  Again I repeat, look at the adrenalin in the face of this XXL Garda.  Templemore should have these guys trained to react in a professional manner.  I know at times emotions are hard to curtail.  I know police officers globally have difficult situations to handle but there are also times where certain Gardai believe they can batter their way through a crowd of peaceful protesters.  Let us not forget some years ago – Reclaim the Streets and the Robot Cop headlines which have been reported on an ongoing basis over the years.  Nobody likes to see any man lose his job but there have been Warnings after Warnings, down the years, that the Gardai are not above the Law and yet some still behave like Barbarians.

At the moment we have the Global Pandemic of the CORONAVIRUS COPID-19 and people are feeling vulnerable and scared.  Ireland is a small country and we all must look out for each other now in our villages and our towns and our cities too.  We must look in on our elderly neighbours and look for those with medical and health issues.  We must not forget the homeless either.  As one man this morning said to me – the City is like something from a Mad Max movie it is so sombre.  My word to describe it this morning is Armageddon.  We are living in very uncertain times especially with no Government to guide the people and reassure them.

Back to the above:  I will close by saying Policing is done through Respect and Trust not by Batons and Fear.  Fred