Éamon Ó Cuív has had his say

“There seems to be an assumption in media reporting over the last few days that members will automatically endorse an agreement arrived at by leadership,” he said.

“From what I hear speaking to FF local reps and members across the country, this could be way off the mark.

My suspicion is that were a Government deal with Fine Gael rejected by the FF membership, it would be a disaster for them. There would probably have to be an election as soon as one was practical and FF having opted out of Government would be in a very weak position. Those claiming to be saving the Party, could end up wrecking it.

In the last three weeks Fred has spoken to numerous FF TD’s and their position is simple:  Martin they claim has sold their soul and de Valera, Ernie O’Malley, Dan Breen, Tom Barry, would turn in their graves but it would not be Lady Lavery, she would be having her long cigarette and laughing from the grave and saying “Michael, you did it again and I don’t mean sex, you sold us out”.  But this time, Lady Lavery is not talking about Collins, she would be speaking about Martin but in a different century.

We all know that the late Brian Lenihan went down and spoke in Beal na Blaith some years ago.  Even that was a step too far for some FF TD’s at that time.  However this Dumb and Dumber coalition has gone beyond any boundaries that FF TD’s stand for.  So where are we now?

Well today Leo, the Great Crusader with his PR hub in full Throttle yet Again, has put on the White Coat and I personally think he is mocking Martin again.  Now, Leo also is taking all the praise and stating only for him we would have 15,000 deaths in Ireland.  This is complete and utter FG Bullshit, all Tonto is doing is stealing the hardwork and the results from Dr Tony Holohan and his team and nobody in RTE will make a comment because now RTE are the mouthpiece for the Blue Shirts.

I am asking now for Jim O’Callaghan, who’s sister Miriam nearly runs Montrose, (she is on every programme bar the Angelus).  Jim forget Cambridge, forget your old party piece, “I did not stand up for God Saves the Queen” but stand up now Jim and be heard.  Bring in Sinn Fein – they have earned it through the vote of democracy which is the Irish people and leave the Blue Shirts who lost the Election out to pasture.  We shall have more updates from the Burleigh hotel where my honourable friend at the moment is on love leave from the D4 lanes while his Lady plays the piano and the song “My Rifle Pony and Me”

Can you imagine a FG FF coalition party, in the present Pandemic crisis, led by Micheal Martin as Taoiseach for the first two years propped into position by a myriad of Independent TD’s with no common purpose or true adherence to what is supposed to be a Truthful Separation of Powers with checks and balances to maintain a true democracy with the Rule of Law challenged by Emergency Powers legislation (without a Sunlight clause).  Again we do not have to look too far as Viktor Orban (with financial backing from George Soros) sidesteps democracy and rules over Hungary by DECREE.

To understand the hostility that Micheal Martin has to acceptance of the Sinn Fein mandate being part of the potential “Trinity” (both Leo Varadkar and Mary Lou McDonald are graduates of Trinity College Dublin) that forms the Government that is FF FG and Sinn Fein (Mary Lou McDonald), I have trawled Google only to find that Micheal Martin in 2009 wrote a book focusing on the period 1918 to 1932.  I note two points; he writes about Arthur Griffith, Sinn Fein and also about the necessity of De Valera to adapt “even he had to adapt…”.  Micheal Martin – surely it would be better in these horrific times of a global Pandemic to form a Government of FF FG and Sinn Fein than waste a focused input from Sinn Fein hurling criticism from across the floor having forced them into being the Opposition Party in Dail Eireann.  We have plenty of time to read now.  For Micheal Martin to have written the book about this period, I think it is time to reflect before decision are made by FG and FF to be propped up in power by the motley crew of self orientated aloof politicians who cannot work in team situations. 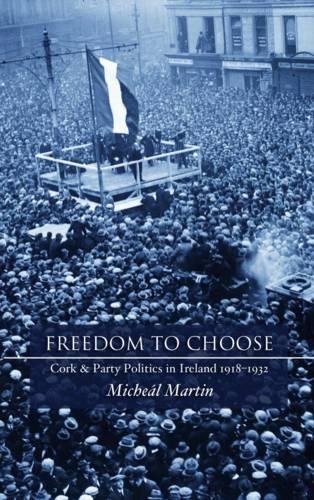 In Ireland the period of 1918 1932 was one of upheaval and realignment as people suffered the hardship of war and came to terms with their new national and political identities. It was also an exciting period, which saw the beginning of a new era in electoral politics after the general election of 1918. Powerful influences were at work during this time: nationalism and socialism, Catholicism, the Gaelic League and the Gaelic Athletic Association. An air of unpredictability prevailed as Sinn Féin and the Irish Parliamentary Party battled for the hearts and votes of the Irish people. By 1932, the violence of the early years of the state was a thing of the past. But how did the political system that we know today evolve? Why did Fianna Fail become the dominant political force? With the demise of Michael Collins and Arthur Griffith, Éamon de Valera became the leading personality in Irish politics. Even he realised that he had to adapt to the changing concerns of the electorate and to deal with their day-to-day social concerns as well as the highly emotive issue of the national question. The parties that formulated policies to address social and economic issues were the ones to survive. This exploration of the development of party politics in Cork city offers important insights into the party politics of modern Ireland. It analyses how the Cork electorate engaged with these issues and interacted with Irish politics at this critical juncture.