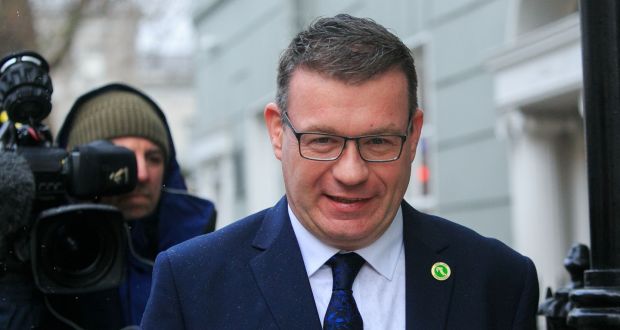 Labour Party leader Alan Kelly: ‘It is up to other parties to take their responsibilities seriously and it is up to them to form a stable government.’ File photograph: Gareth Chaney/Collins

Fianna Fáil and Fine Gael will seek to put the focus back on the smaller parties this week, agreeing a statement of principles to guide any new government and seeking to engage with Labour, the Social Democrats and the Green Party about how a new administration could be formed.

Taoiseach Leo Varadkar and the Fianna Fáil leader Micheal Martin are likely to circulate the statement of principles to the smaller parties and seek to meet their leaders in a bid to find a way forward with them.

There is not expected to be any change in their unwillingness to talk to Sinn Féin about forming a government, which both parties ruled out during and since the general election.

There is some hope in both Fianna Fáil and Fine Gael that Labour could be persuaded to engage on government formation after the party elected Alan Kelly as its new leader on Friday.

Mr Kelly said on Twitter that it was his “greatest honour” to be elected the 13th leader of the Labour party.

But he gave little indication that he was ready to change the party’s decision not to enter government.

“As leader I will of course continue to engage with all parties but when it comes to forming a government we have been very clear since the general election, that it is up to other parties to take their responsibilities seriously and it is up to them to form a stable government,” he said in a statement.

However, with or without smaller party involvement, there is now an expectation in Fine Gael and Fianna Fáil that a deal can be done in the coming weeks. A number of independent TDs have privately indicated their willingness to support a government, sources say, though they will require a variety of national and local concessions to ensure their support.

Mr Martin faces some disquiet in his own party over such a deal, though if – as expected – he secures first run in the taoiseach’s office for Fianna Fáil it will ease some of the objections.

On Sunday, Éamon Ó Cuív – long a contrary voice to Mr Martin’s leadership – questioned an “assumption in media reporting over the last few days that FF members will automatically endorse an agreement arrived at by leadership of FG and FF.

“From what I hear speaking to FF local reps & members across the country, this could be way off the mark,” Mr Ó Cuív said in a tweet.

“There is serious disquiet within the party about forming such a long-term coalition. FF is a membership-led party and it is the members, acting collectively, that are the ultimate authority within the party,” he said.

The question of membership approval – necessary under Fianna Fail’s rules for any participation in government – also raises the issue of how such approval might be obtained.

Under the Covid-19 lockdown, the normal course of action of holding a special ard fheis cannot happen. Senior party figures have considered how they might hold a postal ballot, if such were needed. However, as one admitted this weekend: “Nobody has any idea how it might work.”

The final results of the Seanad election confirmed that the two parties will have a majority in the upper house if they form a government.

Fianna Fáil won 16 seats, while Fine Gael has 12, down from 14 in the last Seanad. A Government requires a minimum of 31 for a majority in the 60-seat Upper House, but a new Taoiseach would have the right to nominate 11 senators directly, giving the two parties a comfortable majority.

Fred has something to say:  Do not underestimate the FF TD’s like Eamon O’Cuiv, John McGuinness and others.  Mickey the Lame Duck Martin may have agreed (in relation to policy) with the Blue Shirts but this is all “duck and dive” at the moment.  Former Bank of Ireland bankteller, Stone Face Calleary whose father Sean was the bag man for Haughey is leading the FF in the Talks, now this tells you a lot.  He who could not even reach the position of assistant bank manager and now he wants to be a Minister.  Come in Dustin the Turkey, come in.

Now we have Labour under the leadership of Alan Kelly and I have said this before and I will repeat it – Alan, you were shafted BY BIG PHIL HOGAN BEFORE IN RELATION TO WATER CHARGES AND NOW YOU ARE OFFERING THE BLUE SHIRTS YOUR SUPPORT AGAIN IE ACCORDING TO THE NEWSPAPERS.  HAVE YOU LEARNED ANYTHING?  PROBABLY NOT!

In the middle of all this, Martin, the Lame Duck, has stated that we don’t need the Greens to form a Government.  Well this in a polite way is telling Pluto Ryan to f… o…  Martin needs the full backing of the FF parliamentary party to go into Government with their Civil War enemies, the Blue Shirts.   This is not a guaranteed vote of endorsement and the same goes from the TD’s within the FG party.

However, Sinn Fein need to come out strong now and start reassuring the people that they have not walked off the stage.   My right honourable friend, Dr Gerald Morgan, has consistently written about Sinn Fein’s massive numbers of first preference votes.  Take for example Pearse Doherty in Donegal.  Sinn Fein now need to step out of the Shadows and Start Talking to the People who gave them that massive vote and turn around on February 8th last.

Micheal Martin stated that SF are not a normal party; that they are run by their masters in the dark corners of west Belfast, well I have news for Martin today: THERE IS ONE ALPHA FEMALE UPSTAIRS IN FF HEADQUARTERS, WE ALL KNOW WHO SHE IS, ESPECIALLY EAMON AND JOHN, AND SHE LITERALLY RUNS MARTIN AND THE PARTY.  I AM AMAZED THAT THE MEDIA AND SF HAVE NOT GOT HER ON THEIR RADAR.  SO MICHEAL – YOU HAVE YOUR OWN PROBLEMS WITHIN YOUR OWN PARTY WHICH ALSO INVOLVES A LOT OF BULLYING AND WHEN YOU SAY SF ARE NOT A NORMAL PARTY ARE YOU ALSO SAYING THAT THE 650,000 PEOPLE WHO GAVE THEM A VOTE ARE NOT NORMAL EITHER?  THIS IS AN AWFUL INSULT TO THE PEOPLE OF IRELAND.

I ask today Mary Lou McDonald, SF Leader, if you are feeling better, please address the people of Ireland, even if it is from your own home; it will give them a boost in spirits in these horrendous times of Pandemic coronavirus COVID-19.  One more very important point I need to mention today is Law and Order:  When this brutal Pandemic is over that the Emergency Powers given to An Gardai Siochana be revoked immediately.  We do not want a Police State ever again or for that matter the Heavy Gang of the Blue Shirts in the 1970’s.  We live in a Democracy that must be protected and its people must have their voice at all times.  Fred

Link:  Wujan, Hubei province, China, where coronavirus COVID-19  Pandemic started in December 2019 have abided by Public Health guidelines and they have progressed forward so Ireland here is a little HOPE from China.

https://time.com/5816938/wuhan-coronavirus-lockdown-ends/
Updated / Friday, 10 Apr 2020 13:56
Christy Moore pulled no punches when he appeared on The Ryan Tubridy Show on RTÉ Radio 1 on Friday, telling listeners that people who travel away for the Easter weekend are “spitting at the Nation”.

“The majority of people are doing everything they can to look after the country,” the 74-year-old said.

“It’s made me feel so proud the way we are responding to this terrible crisis. And, I suppose, sad – sad to hear about the miscreants who behave so badly.

“I had a thought this morning about the people who are flocking to the holiday places. I had this thought that, you know those videos of people spitting at shop assistants and spitting at guards? It’s like these people are spitting at the Nation in a way.

“[It’s] As if they’re saying, ‘We don’t mind. We’re above all this. We’re going away for the weekend. We’re going to go out and keep our jollies going’. That makes me sad and frustrated, even a little bit angry sometimes.”

“But thankfully they are in a small minority,” he continued. “And their behaviour is becoming very visible. We can all see them now.”

Moore paid tribute to “our health workers and cleaners and nurses and doctors and leaders and shop staff and guards”, describing them as “absolute heroes”.

“And let us not forget them when this is over,” he said. “Let us remember and let us look after them as they are looking after us.”

“One day at a time,” he added. “And let’s have hope and confidence in those who are helping us through.”