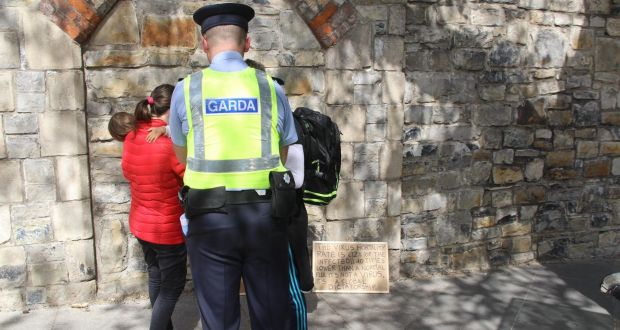 Gemma O’Doherty who, along with John Waters, is taking a case against the State arguing the coronavirus restrictions on public movement are illegal, promoted the protest on Twitter yesterday saying it was being held “in conjunction with the worldwide #MarchForFreedom”.

The hashtag is being used by protesters in America calling for the lifting of restrictions there aimed at stopping the spread of coronavirus.

A group of more than 400 protesters – many of them armed – stormed the state capitol building in Lansing, Michigan, this week to protest at strict social distancing measures introduced by governor Gretchen Whitmer. While hundreds protested outside, some entered the building and engaged in a stand-off with guards.

As the Dublin event was due to start on Saturday afternoon, gardaí closed the Park Gate Street and North Circular Road entrances to the park and turned people away. They also stopped and checked cars passing through the park.

Gardaí spoke to several would-be protesters and told them they were breaking the law by being outside the 2km zone. The 2km limit allows people to exercise near their homes and will be extended to 5km next week.

One could be heard telling gardaí that the natural law trumped man-made law and that he had a right under the Constitution to assemble. Another said he was a man of God and that computers get viruses, not human beings.

Gardaí also surrounded the nearby Courts of Justice building. Approximately 15 to 20 protesters turned up, some with placards, but they dispersed after about an hour. Ms O’Doherty was not at the protest.

Earlier this week dozens of gardaí, including members of the Public Order Unit, were deployed to the Four Courts to ensure opponents of the Covid-19 movement restrictions did not gain access to the building.

About 40 people, some waving tricolours or holding copies of the Constitution gathered outside the courts building on Tuesday morning in support of Ms O’Doherty and Mr Waters.

The group was gathered closely together and few wore face masks. Gardaí advised some to return to their homes but no arrests were made. The Garda and the Courts Service were eager to avoid a repeat of last week when 100 people gathered for three hours in the Round Hall of the Four Courts for about three hours while Mr Waters and Ms O’Doherty were inside.

Their application for permission to bring a challenge against laws introduced due to the Covid-19 pandemic will be heard before a High Court judge next week.

On Saturday the Garda said it implemented a policing operation on Saturday afternoon in the vicinity of the Criminal Courts of Justice and the Phoenix Park.

Gardaí spoke to a number of people, some of whom left after being advised to do so.

Others had their names and addresses taken in accordance with the new regulations under the Health Act 1947.

An Garda Síochána said it responded to the proposed protest with a “graduated policing response based on its tradition of policing by consent. This has seen Garda members engage, educate, encourage and, as a last resort, enforce”.

A senior investigating officer has been appointed to oversee the investigation of breaches of the Covid-19 legislation on previous occasions and an investigation file will be submitted to the Office of the Director of Public Prosecutions.

Coronavirus: Locals left fuming after being refused entry into Phoenix Park due to anti-lockdown rally

Access was restricted shortly before 2 pm as people gathered at the Park Gate Street entrance for the demonstration.

Residents expressed outrage on Twitter as they were left unable to take part in their daily 2km exercise.

The anti-lockdown rally was planned by former journalists Gemma O’Doherty and John Waters who have launched a High Court action to challenge the Government’s lockdown measures to combat the ongoing coronavirus pandemic.

One person said: “Gutted that Phoenix park is temporarily closed today, had a lovely little circuit worked out where I was still less than 2km from home.

“Bizarre to see people calling for the lockdown to be lifted outside the courts. Fair play to the Gardai for not smacking them.”

Another local added: “Closure of Phoenix Park is disappointing. Reality is that many of us living in the south inner city do not have gardens and every little green space around us has been taken.

“The park has been the only opportunity to get some space and fresh air in the last few weeks.”

A third person said: “Thanks to the “planned protest” of lockdown at Phoenix Park, my 2km exercise radius is half its size today. Lockdown is in place to save lives!

“This pandemic is only a blip in historic time, please #staysafe and thanks @gardaTraffic for being empathetic.”

A garda spokeswoman said officers at the scene “interacted with a number of persons, some of whom terminated their journeys and left the area”.

Additionally gardai took down the names and addresses of other people in accordance with  the Health Act 1947.

While initial reports suggested the park was closed off entirely, gardai clarified that access was restricted via Park Gate Street entrance.

The spokeswoman said: “An Garda Síochána wishes to clarify that at no stage was the Phoenix Park closed today.

“Access was restricted via the city gate (Parkgate Street) for a short period this afternoon to ensure compliance with Public Health Guidelines.”

She added: “The Minister for Health has signed the Health Act 1947 (Section 31A-Temporary Restrictions) (Covid-19) Regulations in accordance with the Health (Preservation and Protection and other Emergency Measures in the Public Interest) Act 2020, which are currently in effect until the 05 May 2020 and which set out details of ‘Restriction of movement of applicable persons’ and ‘Restrictions on events’.

“In supporting the COVID-19 public health guidelines and regulations, An Garda Síochána has adopted a graduated policing response based on its tradition of policing by consent. This has seen Garda members engage, educate, encourage and, as a last resort, enforce.

“Section 31(a) Health Act 1947 provides for a graduated policing response from a citizen complying with the regulations, to demanding a name and address, to arrest without warrant.