MATTIE MCGRATH TD: ‘A debate about racism is all just a cover, we want to be seen as this great liberal democracy’. Photo: Gareth Chaney, Collins

Independent TD Mattie McGrath opposed the Dail holding a minute’s silence in memory of George Floyd, whose death has sparked major protests across the United States, saying it was “jumping on the bandwagon, showboating and nonsense”.

McGrath strongly opposed the move to commemorate George Floyd, an unarmed black man who died after a white police officer placed his knee on his neck for nearly nine minutes last month, saying it was “none of our business”.

It’s also emerged that the Dail business committee refused a request from Minister for Culture Josepha Madigan to give a short speech after the minute’s silence – with some TDs expressing concern about her previous opposition to Traveller accommodation in her constituency.

Floyd’s death was repeatedly raised by TDs in the Dail last week, who drew parallels with the controversial direct provision system in Ireland and there is to be a further debate on racism in the house this week.

McGrath told the Sunday Independent: “It’s a tragedy, but why are we putting our noses in it? We’re a different country, what are we supposed to do about it? Are we going to have it for everyone now?

“I did oppose it, I am not a backward gombeen from Tipperary.  They’re a sovereign country, it’s in none of our interests. A debate about racism is all just a cover – we want to be seen to be this great liberal democracy. 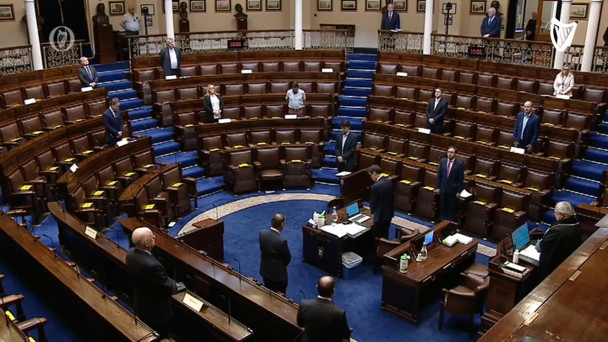 “Where is our liberty now? It’s in tatters, we can’t have a GAA match, we have autistic children who can’t get into schools. I’ll have all the liberati shouting down at me. I said a man has been charged and there is a court case, due process, so we’re going to lock him up and hang him and throw away the keys, summary justice by our great liberati again. We shouldn’t be doing anything to inflame the situation – it’s none of our business.”

Minister Madigan had wanted to deliver a short speech after the minute’s silence that she proposed ahead of last Wednesday’s sitting of the Dail. In a letter to the Dail business committee, she wrote: “I believe this would be an appropriate, fitting and dignified statement of respect. If possible, I would also be grateful for the opportunity to say a brief word on it as proposer.”

But while members agreed that there should be a minute’s silence and a further debate on racism, Madigan’s proposal that she be allowed to give a brief speech was shot down by committee members.

Social Democrats so-leader Catherine Murphy said that Madigan’s previous opposition to Traveller accommodation in her constituency “would have prompted some of us to respond the way we did”.

People Before Profit TD Richard Boyd Barrett said he was also mindful of this in opposing Madigan’s request to be allowed to speak.

In 2014, the then Fine Gael candidate for Dun Laoghaire Rathdown County Council released a newsletter in which she said a proposal for Traveller accommodation on Mount Anville Road was “a dreadful waste of taxpayers’ money”. She later defended her opposition to the plan, insisting it didn’t “make any logical sense from a taxpayer’s perspective”.

The Fine Gael minister’s spokesman did not respond to a request for further comment this weekend.

Despite there being no formal debate on racism in the Dail, many TDs used their time to raise George Floyd’s death, and racism in Ireland.

Taoiseach Leo Varadkar criticised US President Donald Trump’s response to the protests in the US, saying there has been an “absence of moral leadership”.

Sinn Fein leader Mary Lou McDonald said anyone that decries racism but fails to “dismantle the disgraceful system of direct provision is no good at all”.

McDonald also raised the “open, blatant discrimination” that she said was still present against the Travelling community. “We have the diagnosis, now we need the treatment,” she said. “The ball is in our court. What do we do? That’s what the death of George Floyd asks of us.”

Varadkar responded that “a lot of direct provision accommodation is sub-standard and that needs to change”.

The Taoiseach said the Government was attempting to do this, but also said it was not compulsory and is “ultimately a service provided by the State”, with free accommodation, food, heat, lighting, education, and spending money.

“It’s not the same thing as a man being killed by the police,” he added.

Fred says:  When do we admit our faults, and they are many?  We have a very serious homelessness crisis, people who had to face COVID-19 with unacceptable lack of regard from politicians who cannot even manage to get a Government together, remain homeless.

What about the Travellers and especially their loved one’s who survived that awful fire in 2016: We hear nothing about them but we can safely assume – they fall into the Government’s “Forgotten” category.  I highly recommend this link to Josepha Madigan.  To speak out is laudable but it must be with true soul.   https://www.thejournal.ie/travellers-carrickmines-tragedy-3014285-Oct2016/