Skip to content
Updated / Wednesday, 10 Jun 2020 20:59
Tyson Fury has thanked Daniel Kinahan for “getting this deal over the line” as he reached an agreement to fight Anthony Joshua twice, with the first bout to be held next year.

The British pair now hold all four major belts in boxing’s blue riband division and speculation of a blockbuster bout to determine the undisputed world heavyweight champion has been steadily building in recent months.

And while promoter Eddie Hearn insists there are several obstacles still to overcome, with no contracts signed, Joshua’s promoter revealed the fighters are on the same page with regards to the financial terms of both bouts.

“There is still a lot to overcome. We are looking at venues and dates. It’s fair to say (Joshua and Fury) are in agreement regarding the financial terms of the fight.

“The most difficult part of any deal is the financial element. I believe we’re in a great place where both guys have agreed to what that should be.

“The main positive news is that Joshua and Fury have agreed to a two-fight deal, in essence. The point of Fury, Joshua and the teams agreeing to the structure of the deal? The first fight could happen next summer. It will be 2021.”

In a post on Instagram today, Tyson Fury said he received a phone call from Kinahan to confirm “the biggest fight in British boxing history has just been agreed”.

Fury thanked Daniel Kinahan for “getting this deal over the line”.

Kinahan, a Dubliner who lives in the Middle East, was in July 2018 identified in the High Court in Dublin as a senior figure in organised crime on a global scale.

The Criminal Assets Bureau said he “controlled and managed” the operations of the Kinahan Organised Crime Group, an organisation which smuggles drugs and guns into Ireland, the UK and mainland Europe and “has associations that facilitate international criminal activity in Europe, Asia, the Middle East and South America”.

Joshua must first overcome mandatory challenger Kubrat Pulev when boxing gets the green light to resume properly after all major shows were scrapped because of the coronavirus pandemic.

Fury, meanwhile, is contractually obliged to face Wilder for a third time and the Briton said on Instagram: “The biggest fight in British boxing history has just been agreed. Two-fight deal. Tyson Fury versus Anthony Joshua next year.

“I’ve got to smash Deontay Wilder’s face right in in my next fight and then we go into the Joshua fight next year.”

The situation could be complicated further by Dillian Whyte, who the WBC has said must fight for its title before the end of February next year. 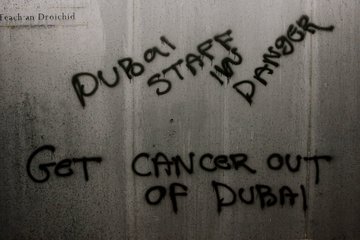 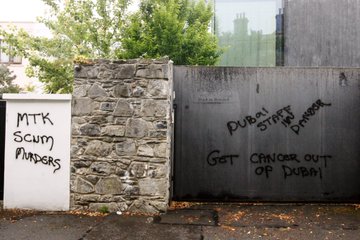 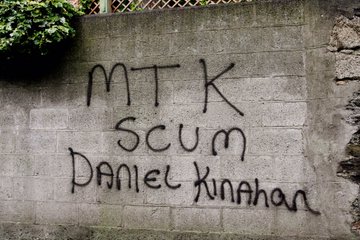 Padraig O’Reilly Photographer
@padraig_reilly
Residents of Ballsbridge, one of Dublin’s more wealthy area’s, woke up to this graffiti this morning. The anti-Daniel Kinahan slogans were sprayed on Pembroke Lane which runs behind Dublin’s Dubai Embassy on Pembroke Road..One resident asked me who is Daniel Kinahan!!!