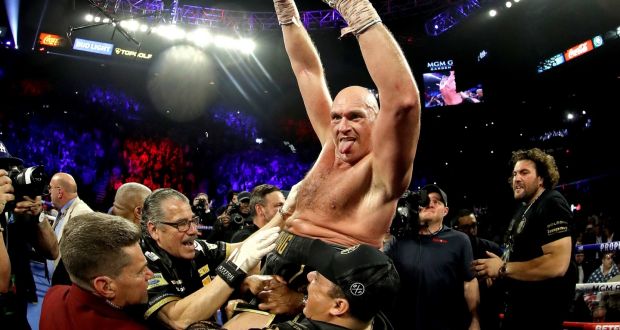 The Government made fresh contact on Thursday night with authorities in the United Arab Emirates over the involvement of crime boss Daniel Kinahan in the brokering of a high-profile boxing match.

Kinahan, who now lives in the UAE, has helped broker a bout between heavyweights Tyson Fury and Anthony Joshua, a fight which will net hundreds of millions in profits for those involved.

Taoiseach Leo Varadkar told the Dáil on Thursday that the Department of Foreign Affairs had been in contact with “the authorities in the United Arab Emirates about that matter”.

It is understood that fresh contact was made with the UAE on Thursday night but is not clear what message the Government was relaying – or how the message was conveyed.

The Government came under pressure from figures such as Labour leader Alan Kelly on the issue.

“There is an individual from our country who, according to the High Court, is a very senior figure in organised crime on a global scale and, according to CAB [Criminal Assets Bureau], has controlled and managed operations of the Kinahan organised crime group for some time,” Mr Kelly said, adding that intervention was needed and owed to the “victims of such a cartel”.

They should be absolutely hammering on the door of the Arabs, telling them throw out and eject him

Mr Varadkar said he was rather “taken aback” to see heavyweight boxer Tyson Fury in his video just dropping “that name that you mentioned as if this was somebody who did not have quite a chequered history in this State and elsewhere”.

And a retired senior garda has called on the Government to pressure the UAE to eject Kinahan from the country.

Brian Sherry, a former detective inspector who investigated organised crime in Dublin, said: “This Government is inept and that’s putting it mildly. They should be absolutely hammering on the door of the Arabs, telling them throw out and eject him back to Ireland where he can face trial for the crimes he has committed against the people of Ireland. It’s ludicrous.”

Truck driver is arrested after €6.2m of drugs seized at port

Some of the cocaine and cannabis seized by customs

Detectives are trying to establish which gang was responsible for the €6.2m worth of drugs seized yesterday by customs officers at Dublin Port.

One line in the investigation is that the massive haul of cocaine and cannabis – one of the biggest busts of the year – may have been sent here for distribution by the Kinahan cartel, but this has not been confirmed.

“There are not too many gangs operating in the State that would be able to organise such a huge shipment, but the Kinahan cartel are certainly one organisation that could have,” a source said last night.

“These drugs originated in Holland, and what has also been seen in recent times is that gangs in Ireland are clubbing together when purchasing drugs on this scale.”

“The drugs were discovered following the search of a curtain-sided trailer which had arrived into Dublin Port from Rotterdam.

“The search, with the assistance of Revenue’s mobile X-ray scanner and detector dog Robbie, led to the discovery of the drugs concealed within a number of hot water cylinders.

“A Northern Ireland-based haulier was arrested at Dublin Port by the Garda National Drugs and Organised Crime Bureau (DOCB).

“A UK-registered truck and trailer were also seized by Revenue officers.”

The truck driver was being detained at Store Street Garda Station last night, with officers attempting to carry out “full background searches on the suspect to determine who he was working for”.

He can be held for up to seven days.

The DOCB has carried out a number of separate investigations this year into gangs in the North that have been working with drugs trafficking crews from the Republic.

Gardai said yesterday’s seizure is one of the biggest of the year, and they believe it may have a “significant temporary impact” on the cocaine market.

It has been a bumper week for revenue at Dublin Port, with officers seizing 3.5 million cigarettes and 3.9 tonnes of processed tobacco at the facility on Tuesday.

“Both shipments originated in Germany and have a combined retail value of €3.8m,” a spokesman said.

Updated / Thursday, 11 Jun 2020 20:20
The Taoiseach has confirmed there has been contact between the Department of Foreign Affairs and the United Arab Emirates regarding Daniel Kinahan.

Leo Varadkar said he was rather “taken aback” to see heavyweight boxer Tyson Fury in his video just dropping “that name that you mentioned as if this was somebody who did not have quite a chequered history in this State and elsewhere”.

He said: “While I can’t comment on any particular garda operation, I can certainly assure you that there has been contact between the Department of Foreign Affairs and the authorities in the United Arab Emirates about that matter.”

The Taoiseach was responding to Labour Leader Alan Kelly, who said: “Taoiseach our country has to intervene here, we have to through the Department of Foreign Affairs intervene with the UAE in relation to this individual. We owe it to the victims of such a cartel.”

Mr Kelly pointed out that a High Court judge had made a defining statement in relation to Mr Kinahan, who lives in the Middle East.

“He has now rebranded himself in the Middle East as a boxing promoter and one of the most famous individuals involved in that has described him as a smart, able and honest man.”

Two years ago, the High Court named the Dublin man as a senior figure in organised crime and found the criminal gang he “controlled and managed” was involved in drugs trafficking and firearms offences on an international scale.

Mr Kelly is the second member of the Dáil to call on the Government to take action.

This evening, Junior Sport Minister Brendan Griffin told the Dáil he was “absolutely appalled to see what has surfaced in relation to boxing”.

He has asked his department to draft letters to his counterpart in the UK and the broadcasters Sky and BT to express outrage at the situation, which he said was “completely unacceptable”.

Minister for Sport Shane Ross said: “The work done on the ground in boxing was absolutely unparalleled and it was absolutely wrong if their name was sullied by activities that are completely unacceptable.”

He said he was calling “on our Tánaiste and Minister for Foreign Affairs Simon Coveney to make a direct appeal to the authorities in Dubai to hold Kinahan to account for his real activities”.

Sky Sports, BT Sports and the Department of Justice have declined to comment.