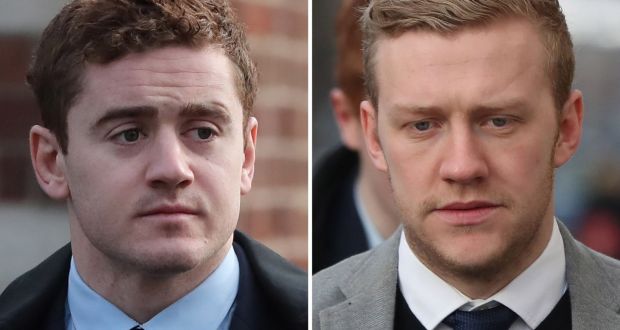 Rugby players Paddy Jackson and Stuart Olding: their trial and acquittal was the subject of “Documentary on One: Notes from a Belfast Rape Trial”. File photograph: Niall Carson/PA

One of the most memorable slogans during the long campaign for women’s reproductive rights in Catholic-dominated Ireland was: “Get your rosaries off our ovaries”. After listening to devastating radio accounts of recent sexual assault trials, activists might consider a new rallying cry: “Get your hands off our pants”.

As is underlined by both Marian Finucane (RTÉ Radio 1, Saturday and Sunday) and the Documentary on One: Notes from a Belfast Rape Trial (RTÉ Radio 1, Saturday), to bring a complaint of sexual assault is to have your dirty laundry paraded in public, literally. The Documentary On One, which examines the trial and acquittal of Irish international rugby players Paddy Jackson and Stuart Olding, shows the way distressing real-life incidents are dissected in courtroom, sometimes with a coolness bordering on the callous.

Amid reportage and reconstruction that throws light on the case itself and the trial process in general, the most notable contributions come from Jackson’s defence barrister Brendan Kelly QC. The English lawyer coolly explains why in court he examined the blood-stained underpants of the young woman who made the complaint of rape against the players. Narrator Ronan Kelly notes that while this tactic was seen as “humiliation heaped on top of humiliation”, the lawyer says that because the garment was used as evidence of a sexual attack, he was obliged to challenge it. “The clothes had to be introduced because of the confusion between what might have been the source of blood and what was the source of blood,” the barrister explains matter-of-factly.

That such jarringly clinical moments lie at the heart of the adversarial legal system “makes some people shiver with dread”, as Marian Finucane remarks on Sunday’s edition of her show. She talks to barrister Irene Sands about the recent Cork rape case in which a defence lawyer referred to a thong belonging to the “complainant”. Sands views this move with legal detachment: “The defendant is entitled to test evidence and ask questions,” she says, admitting this can be “unpleasant and uncomfortable”. (The defendant in the case was also found not guilty.) *

Finucane is unconvinced. “To the lay person, it’s very hard to see the relevance of somebody’s underwear,” she says. When Sands responds that prosecution barristers often introduce clothing as evidence, Finucane’s irritation is palpable: “Did you ever hear of a man’s underpants being brought out to the jury? Ever?” Her guest concedes that the underwear might not have been “referenced” in the Cork trial had it been “Bridget Jones or Spanx” – in other words, less revealing. “Well, that’s the point, it’s like you’re guilty of a crime for wearing them,” says Finucane, proving her argument with a flourish that a trial lawyer would envy.

The host’s strong feelings are evident. When she later calls the cross-examination of the woman in the Belfast case “an exercise in sustained cruelty”, her voice rises so sharply that she tells herself, “don’t get carried away”.

It’s a welcome reminder of her own pedigree as a feminist role model. Before becoming the star presenter who can go through entire shows on cruise control, she was a pioneering woman who forged her own path in the male-dominated broadcasting world of the 1970s. It’s surely no coincidence that Finucane has brought a renewed energy and urgency to her on-air persona at a time when women’s treatment by men has come sharply into focus.

This is again evident during Finucane’s interview with Chris and Susanna Cawley, whose sister Celine was killed by her husband Eamonn Lillis in 2008. The Cawleys outline the case they took to stop Lillis from keeping the proceeds from the sale of the couple’s house after he finished his sentence for manslaughter. “To put it in a very direct way, killer takes all,”says Finucane.

The Cawleys succeeded in winning a 50-50 split of the proceeds. But it’s the discussion of what Chris Cawley calls the “underlying culture of violence against women” that seems most grimly relevant, particularly in terms of how these crimes are treated in the courtroom. While accepting that the accused are absolutely entitled to a defence, Chris points to the disconnect between that need and the experience of identifying his sister in a morgue.

“When you see someone three hours after they’ve been beaten to death with a brick, you have to square that lived reality with someone in a court defence case saying it was only a mistake,” he says. Finucane describes the situation more bluntly. During the trial, she says, “Celine was essentially painted as a harridan”. It’s a horrifically relevant observation. Finucane remains capable of presiding over her show with the distracted manner of a senior judge at a minor tort case, but can still display the fire of a crusading advocate.

The criminal justice system comes in for more stick on the Last Word (Today FM, weekdays), when Matt Cooper hears of a Cork woman sentenced to two months imprisonment for criminal damage to a tube of Pringles. Solicitor Dara Robinson notes that, while the woman had previous convictions for theft, such costly short-term sentences deliver “no value for the State”. Deirdre Malone of the Irish Penal Reform Trust adds that short prison stays offer no opportunity to prevent reoffending. “This isn’t bleeding heart, this is common sense,” says Robinson.

But even here, a gender gap emerges. “There’s a major disparity when it comes to short-term sentences,” says Malone. She says that the proportion of women serving terms of less than 12 months or on remand awaiting trial is roughly twice that of men. When Cooper asks why, Malone replies she doesn’t know.

It’s a brief but illuminating item. Sometimes the answer is so obvious it’s easy to miss it.

A drug addict who tracked a woman down to a women’s refuge centre and made threatening phone calls to her before threatening to ‘burn the place down’ claimed he was on a two day ‘bender’ at the time.

Thomas Peter Mulhern (23) has been sentenced to five months in prison after he pleaded guilty to contravening a safety order that was in place at the time.

He put the woman in fear but claimed his recollection of the incident is minimal, Drogheda District Court heard.

The defendant, of Rathmullen Park in Drogheda, contravened the safety order at Drogheda Women’s Refuge on August 25th.

Inspector Brendan Cadden told the court the victim had to leave her residence and go to a woman’s refuge in Drogheda.

‘The defendant tracked her down and made threatening phone calls. He arrived at the refugee and threatened to burn it down. She was in fear,’ said Insp Cadden.

Defence barrister Irene Sands said ‘It was an unpleasant experience for the victim.’

‘He is a drug addict and was on a bender for two days prior to the event. He was on a huge amount of illicit substances and his recollection is minimal. Thankfully the injured party didn’t come to any harm,’ she said.

Judge John Coughlan remarked: ‘The lady had to leave her home. He tracked her down and is guilty to contravening a safety order. In my view it’s five months in custody.’

A MAN has appeared in court charged in connection with the alleged abduction of a baby and the theft of more than €662,000.

Jonathan Gill made no reply when three charges of false imprisonment and one of robbing €662,125 were put to him.

The case relates to one of the most high-profile ‘tiger kidnappings’ to ever take place in Ireland.

An Post employee Warren Nawn (37), his partner Jean Marie Matthews (36) and their 10-week-old baby daughter Ella, were taken hostage at their home in Drogheda, Co Louth in August 2011. The nightmare lasted for 14 hours.

Yesterday a court heard that Gill, with an address on the Malahide Road in Dublin, was arrested at his home and brought to Drogheda garda station. The false imprisonment of the family is alleged to have taken place between August 1 and 2, 2011.

The robbery of the post office in Drogheda took place on August 2 2011.

Gda Sgt Fearghal O’Toole told Drogheda district court that when the four charges were put to him the accused made no reply.

Sgt O’Toole said he was applying for the accused to be remanded in custody to appear again in court next Tuesday.

Defence barrister Irene Sands told Judge Michael Coghlan “there is no application for bail at this time,” but she anticipates bail will be applied for at next week’s court appearance.

She also submitted a statement of means for the accused as part of an application for legal aid and Judge Coghlan said he was reserve a decision for the time being.