Irish organised crime now in an era of unprecedented extremes 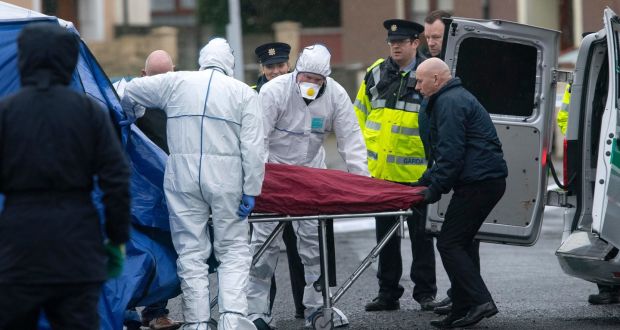 Gardaí remove the remains on Tuesday morning at the scene of the discovery of human body parts at the junction of Moatview Gardens and Moatview Drive in Darndale, Dublin, on Monday night. Photograph: Colin Keegan, Collins

The discovery of arms and legs in a bag on a pavement outside homes on a north Dublin housing estate is a shocking act even by the standards of Ireland’s most ruthless drugs gangs.

Judged as a standalone crime this killing is gruesome and cruel. In the longer term, it is the latest juncture in Irish crime’s evolution towards narcoterrorism-style violence.

More lives than ever are now being claimed in Irish gang feuds.

The modern era of gangland crime in the Republic can be viewed as the last 20 years and divides into three sections: a decade of carnage followed by a lull of approximately five years before the underworld erupted again into its most intense round of bloodletting yet.

The first decade-long period is bookended by a major drugs haul in a Dublin city centre hotel in March 2000 and the murder of Eamon Dunne a decade later in a Dublin pub in April 2010. During that decade Ireland witnessed its first protracted gangland gun feuds.

The Crumlin-Drimnagh feud began in March 2000 in a row over a drug seizure and the unrelated Limerick feud started in January 2003. By 2010 almost 30 people had been murdered in the two disputes.

While the sheer scale of those two disputes alone broke new ground for Irish organised crime, a gang in Finglas, Dublin, headed by Marlo Hyland and later Eamon Dunne, also went on a killing session at the same time; 11 people were murdered in the 3½ years Dunne led the gang.

Indeed, Dunne’s killing session was so intense the Kinahan cartel decided to murder him to restore calm to the Irish underworld, one of the biggest markets for its drugs.

When Dunne was killed a calm of sorts was restored. Gun killings linked to organised crime still occurred in Ireland but they were fewer in number and they did not lead to protracted feuding.

However, a new era was ushered in when Dubliner Gary Hutch was shot dead in Spain in 2015. This second explosion of modern era gun feuding in the Republic continues to the present day and is proving even more extreme than the decade to 2010.

The Gary Hutch murder effectively began the Kinahan-Hutch feud. It represents the first time an international cartel, the Kinahans, has been involved in a gun feud in Ireland. In the three years and four months between the feud’s first killing in September 2015 and its most recent murder in December 2018, there were 18 people shot dead.

That’s the highest number of killings in any Irish gun feud to date and the frequency of the attacks is also unprecedented.

In one Kinahan-Hutch attack a team of gunmen dressed in mock Garda uniforms and firing IRA-supplied AK47s stormed into a hotel in a bid to target their rivals. Another new feature of this feud, and one usually associated with the narcoterrorism of Latin America and Asia, has been the shooting dead of soft targets by the Kinahan cartel to “get at” the Hutch gang.

That involves people in the wider Hutch family or their associates, who were not themselves at odds with the Kinahan cartel, being shot dead simply to damage Hutch faction leader Gerry Hutch and put him under pressure.

Just as the Kinahan-Hutch feud entered a period of quite in December 2018, another gun feud erupted in Dublin, in January of last year. The frequency of the attacks and the barbaric nature of some of them have only served as proof that Irish gangland is now in a new era of its most intense gun violence yet.

In the 10 months to last November five men were murdered in the feud between criminals based mainly in Coolock, Dublin. It is a murder rate that, like the Kinahan-Hutch dispute, outstrips even the Limerick and Crumlin-Drimnagh feuds, which were unprecedented at the time.

The victims in the Coolock feud have mostly been young men – aged 21, 22 and 23 years. One of them was shot in the head while wheeling his baby son in a pushchair. Another was shot dead during a visit to pay his respects to the family of another man shot dead days earlier.

And now the latest killing appears linked to yet another new feud; in Drogheda, Co Louth. If the limbs found in a holdall bag in Darndale on Monday night are confirmed as those of a missing 17-year-old, as is suspected, gangland will have plumbed to a new low even by its own, increasingly extreme, standards.