Pensioner (77) is killed with ‘machete’ outside his home

Gardaí question suspect and hunt for weapon used in attack

Gardaí at the scene in Clonsilla where a man in his 70s was stabbed to death. Photo: Frank McGrath

A pensioner was stabbed to death outside his Dublin home after confronting an armed man smashing up a car nearby.

Peter McDonald (77) was attacked with a “machete-like” weapon in the Whitechapel Road area of Clonsilla on Saturday morning.

Gardaí were alerted and arrested a 48-year-old suspect following a five-hour standoff with armed officers.

The Irish Independent has learned that the man arrested was known to Mr McDonald, and that the pair had been involved in a number of disagreements previously. It is understood the victim was violently attacked when he left his home to investigate after hearing a car window nearby being smashed. 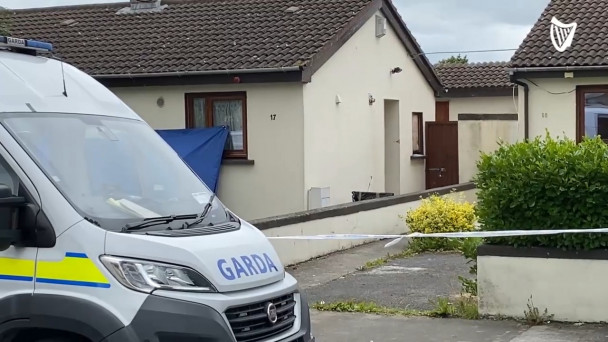 The car was parked at a different property not linked to Mr McDonald or the suspect.

A source said: “There is a history of complaints relating to typical neighbourhood disagreements like noise and things like that.

“But there was no previous violence involved.

“So the two men were certainly known to each other but what exactly led to this horrific killing is not yet known.

“The suspect lived very close to the scene and he was arrested at his home after initially refusing to come out.”

The suspect is known to gardaí and has previously been arrested in relation to burglaries, thefts and road traffic offences.

It is understood that he has been living in the Clonsilla area recently but previously resided at a halting site in the Blanchardstown area.

He remains in Garda custody and his period of detention was extended yesterday.

A decision will be made whether to charge him in relation to the incident or to release him pending a file on the case being sent to the Director of Public Prosecutions (DPP).

Gardaí were called to Mr McDonald’s property shortly before 6am after receiving reports of a man suffering serious injuries. When emergency services arrived, they discovered the pensioner in the front garden of his home with a number of stab wounds.

He was pronounced dead at the scene.

Armed gardaí then attempted to gain entry to a property nearby where the suspect had barricaded himself in. Gardaí requested a media blackout, which was maintained as they dealt with the incident.

At around 11.40am officers entered the property and subdued the man before arresting him.

He was last night being held under Section 4 of the Criminal Justice Act.

The scene was preserved for a technical examination which was carried out yesterday while the suspect’s home was also searched.

It is understood gardaí were still attempting to locate the weapon used in the murder, which has been described “like a machete”.

Yesterday, floral tributes were placed behind the Garda cordon outside Mr McDonald’s home.

The victim is understood to have lived alone.

Blood marks could also be seen outside one of the houses as gardaí kept the cordon in place.

A blue tent also remained at the scene before the victim’s body was removed to the local mortuary.

A post-mortem examination will determine the exact cause of death.

Locals described Mr McDonald as a nice man who would say hello to them.

Witnesses said there were a large number of Garda vehicles in the area on Saturday, including several Armed Support Units (ASU) as well as paramedics from the Dublin Fire Brigade.

A Garda spokesman said: “All units involved in this incident worked closely under Garda strategic and operational commanders with the intention to contain the incident, preserving life and bringing the incident to a peaceful conclusion.

“Gardaí are appealing for anyone with information in relation to this incident to contact them at Blanchardstown on 01 666 7000 or the Garda Confidential Line on 1800 666 111.”