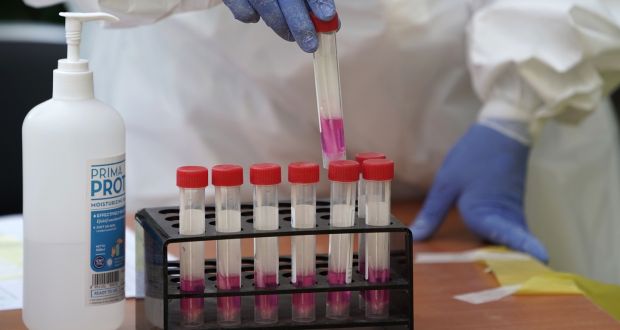 Swab samples: Chief scientific adviser Mark Ferguson believes the country should test 7 per cent of the population for coronavirus every day, which would allow the entire economy to reopen quickly. Photograph: Dimas Ardian/ Bloomberg

The Government’s chief scientific adviser privately warned a slow easing of coronavirus restrictions would cause “terrible” economic damage, and instead proposed a massive programme of random testing be introduced.

The country should test 7 per cent of the population for coronavirus every day, which would allow the entire economy to reopen quickly, chief scientific adviser Mark Ferguson told senior Ministers in emails sent in late April.

Currently, people are referred for testing if they display symptoms of Covid-19, such as a cough or fever, or are identified as close contacts of confirmed cases.

Prof Ferguson, who is also the director of funding body Science Foundation Ireland, encouraged the Government to follow an approach set out by American Nobel prize winning economist Paul Romer.

This included a proposal to test the entire population every two weeks, amounting to 7 per cent a day, which would represent an unprecedented scaling up of testing.

Under the strategy people would be allowed to book into restaurants or other services only if they could show they had a recent negative Covid-19 test. This would allow people testing negative to return to normal life and, as a result, boost confidence in the economy.

In an April 23rd email, Prof Ferguson said the “attractive features” of the plan would allow for “a very rapid return to normality thereby lessening long-term effects on the economy”.

The email was sent to then-taoiseach Leo Varadkar, Minister for Finance Paschal Donohoe, Minister for Foreign Affairs Simon Coveney, and then-minister for business Heather Humphreys. The correspondence was released to The Irish Times under the Freedom of Information Act.

The massive testing regime would prevent “the emergence of a second or third peak of infection and resultant reintroduction of restriction measures, which would have severe social and economic consequences”, Prof Ferguson said.

The proposal was “the most practical, robust, cost-effective strategy I have come across to date”, he said.

It would also mean the country could return to normal regardless of a Covid-19 vaccine development, “which may or may not occur in the future”, he said.

In a separate email to senior Department of Business officials, Prof Ferguson said the plan “is the only strategy that I’m aware of that can allow a safe but fast return”.

The chief scientific adviser said the “potential economic damage of a slow return is terrible”.

In May, the Government decided to pursue a phased plan to ease restrictions gradually and reopen the country from the national lockdown.

The Health Service Executive’s current testing regime has capacity to process 15,000 tests a day, although to date that level has not been required.

Since the start of the pandemic there have been 624,615 tests processed, and 4,740 in the last 24 hours. Staff in nursing homes undergo weekly serial testing, with testing protocols also in place for incoming hospital patients.

The proposed massive programme of frequent testing for the entire population would mean more than 340,000 tests would need to be processed a day.

In the email correspondence, Prof Ferguson said testing 7 per cent of the population every day was “feasible in a small country like Ireland”.

A Department of Health spokeswoman said its testing strategy was “informed by international evidence and practice, and the level of transmission in Ireland”.

“It will continue to focus on those areas/populations where the virus is most likely to be transmitting and where it can do most harm,” she said.

More from The Irish Times

Coronavirus: Glynn warns against distraction of holidays debate and advises people to do six things

Fred is warning people that this pandemic could lead into a second wave and the truth is the severity of the first wave has people both in a state of shock and denial so much so that the fear that kept us cautious and altruistic towards are fellow human beings may be about to waiver.  Therefore Fred is including this article from Robert Reich and it is asking people to go this extra step of the journey, a journey that is well recorded in John M. Barry’s book about The Great Influenza (1918 Spanish flu) https://www.youtube.com/watch?v=FYob2CPniAE and ensure that we find ways and means of avoiding the worst of this pandemic which has taken away many lives.

COVID-19 has left the economy in tatters, put millions of people on the brink of financial devastation, and taken the lives of over 145,000 Americans. Congress has just days left to pass legislation that will keep struggling Americans afloat and stave off economic catastrophe.

Here are five key demands for the new bill.

1. Contain COVID-19. Its catastrophic rates of sickness and death, as well as tragic economic consequences, require the boldest remedies this country is capable of mustering. There will be no economic recovery until the virus is contained.

Other nations – among them, Germany, South Korea, and Italy – have contained the pandemic with comprehensive testing, contact tracing, and isolation. The House of Representatives wants to provide $75 billion for these measures in addition to free access to coronavirus treatment and support for hospitals and other providers. This is the absolute minimum of what’s needed.

2. Extend unemployment benefits to help people survive the worst economic crisis since the Great Depression. Previous coronavirus relief legislation added $600 to weekly unemployment and extended coverage to gig workers and others not normally eligible. But those payments are about to end for roughly 25 million people. If they do, we can expect more human suffering, and more joblessness because the extra purchasing power has helped sustain the economy. The payments should be continued at least through the end of the year, as the House bill provides.

Even with the extra benefits, working people will have a strong economic incentive to return to work once COVID is contained and these benefits expire. Not to mention it’s good for the economy when people have extra money to spend to sustain remaining economic activity. Finally, it is beneficial to the public’s health that as many people as possible avoid workplaces that pose any risk of infection. Keeping people home to contain the virus is the only way we get the economy back on track.

3. Prevent a potential wave of evictions and foreclosures. 32 percent of households missed their July rent or mortgage payments. The bill must extend the federal eviction moratorium, and provide assistance for renters and homeowners to pay rent, mortgages, utilities, and other related costs. Substantial additional resources for housing assistance is a no-brainer.

4. Shore up state and local budgets. State and local governments are facing huge budget shortfalls over the next three years. Without federal aid, vital public services will be on the chopping block – schools, childcare, supplemental nutrition, mental health services, low-income housing, healthcare – at a time when the public needs them more than ever.

For public schools, the issue isn’t so much whether to reopen but how to do so in a way that doesn’t risk the health of students, teachers, and other school personnel. This will require substantial additional resources. If we could afford to give corporations a $500 billion blank check in the last round of relief legislation, we can surely afford to help struggling state and local governments. The House Bill provides nearly $1 trillion to state and local governments, which is minimally adequate.

5. Don’t compromise what’s needed in the bill out of concern about the national debt. The real issue is the ratio of debt to the size of the economy. The government must spend large sums now to help the economy recover faster – thereby reducing the ratio of debt to the overall economy over the long term. Besides, as we learned during the Great Depression and World War II, large spending to reduce human suffering and promote economic wellbeing is well worth the cost. It’s what almost every other nation is doing.

None of this should be controversial. This bill is perhaps our only chance to get COVID-19 under control, Americans fed, and the economy back up and running.

Call your senators at (202) 224-3121 and demand they fight to protect the American people. The window to act is closing, so raise your voice now.

Fred concludes the message clear COVID-19 is a global pandemic knowing no boundaries.  Be aware:  Professor Ferguson stands apart from the Public Health team but he is a member of the medical profession and has decades of experience; he is also the Chief Scientific Adviser to the Government and his advice, given that Ireland is a small country, and taking account of New Zealand’s successful outcome, it could be a solution for Ireland.

Robert B. Reich is Chancellor’s Professor of Public Policy at the University of California at Berkeley and Senior Fellow at the Blum Center for Developing Economies. He served as Secretary of Labor in the Clinton administration, for which Time Magazine named him one of the ten most effective cabinet secretaries of the twentieth century. He has written fifteen books, including the best sellers “Aftershock”, “The Work of Nations,” and”Beyond Outrage,” and, his most recent, “The Common Good,” which is available in bookstores now. He is also a founding editor of the American Prospect magazine, chairman of Common Cause, a member of the American Academy of Arts and Sciences, and co-creator of the award-winning documentary, “Inequality For All.” He’s co-creator of the Netflix original documentary “Saving Capitalism,” which is streaming now.