The Battle of Baldoyle: When the animal gangs went to the races

After a violent gang clash in 1940, gardaí found sticks, knuckledusters and a sword 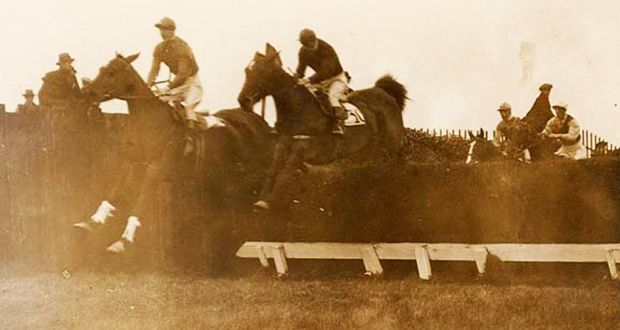 The Steeplechase for the Metropolitan Plate at Baldoyle Racecourse in March 1926. Photograph: National Library of Ireland/Flickr commons

The battle was short. But it was violent. Those sitting in the reserved enclosure at Baldoyle Racecourse didn’t realise anything was wrong until they saw a woman being removed for medical treatment. She had fainted, wrote The Irish Times, after witnessing the spilling of “a great deal of blood”.

Reports of the aftermath of the Battle of Baldoyle were bloodier again. At the Mater Hospital later that day – May 14th, 1940 – surgeon Henry Barniville (who would set the record for longest serving Senator at 35 years, 11 months) attended to Daniel Towell.

The bookmaker’s assistant was by far the worst-off following the fracas. On admission, his breathing was shallow and he was spitting blood. He had a deep stab wound in his chest.

Whatever caused the wound had passed through Towell’s back with “considerable force”, said Dr Barniville, according to The Irish Times.

“The wound had been caused by a tapering instrument, whose greatest breadth was about an inch and a half and whose length must have been at least fifteen inches, as it came out the other side,” he said. “It had pierced the left lung and the sac in which lay the heart; it should have scarred the heart itself, but it was not possible to ascertain this.”

Another man under Barniville’s care, an Army private named Patrick Kinsella, had a serious wound just under the groin. It eventually became infected and life-threatening; it was attributed to a “rusty bayonet” or carved knife.

The arsenal of weapons at the Battle of Baldoyle – as indicated by the doctor – made headlines in itself. Knuckledusters, sticks, bars, butcher’s knives, the aforementioned bayonet, bicycle forks and a sword were collected from the grass after one of the most violent chapters in the history of Dublin’s “animal gangs: – groups of criminals that made headlines for acts of brutal violence and crime throughout the capital during the 1930s and 40s.

Following the Battle of Baldoyle, 12 men were put on trial in November 1940, and each day was covered in The Irish Times.

The lives of Towell and Kinsella had been in “grave danger”, but in an “almost miraculous” turn, both survived. The gang members escaped charges of murder, instead pleading not guilty to conspiracy to assemble riotously and charges of causing grievous bodily harm.

The riot really began in the Coomb earlier that day, where members of a southside animal gang, “Hannigan’s Army”, began to assemble on the street. George Hannigan – a 30-year-old bookmaker and father of six – had a matter to settle with a northside bookmaker.

On his beat that day was famous garda Jim “Lugs” Branigan. A group Hannigan’s associates – about 20, all told – left a public house in groups of two and three. Branigan recognised Hannigan and his general, James Winters, standing outside the Coombe hospital. The two men joined the nearby gathering.

“What are the gang up to?” asked Branigan of Winters, according to another Irish Times report. Winters replied: “We are going to a wedding.”

Branigan turned his attention to Patrick Murphy, another associate, who was carrying a large blackthorne. “When asked why he was carrying a large stick, Murphy said that he had a sore leg and pulled up his trousers, but (Branigan) could see no mark,” reads the report. Branigan took the stick from Murphy and warned the gang not to make any trouble.

“There will be no trouble here,” replied Murphy, “we are going to the country. It is a little matter of blackmail.” Murphy asked for his stick back. Branigan declined.

Taxis were called using the public phone in the hall of the Coombe hospital, and the men were ferried to a Baldoyle public house owned by a man named Patrick Carroll. The publican said as far as he could tell, the men were up to no good. About half seemed to be carrying items beneath their coats as they set out for the racecourse.

Just before the last race, a rumble in the crowd grew to panic. Screams rang through the air. Spectators ran in all directions. Gardaí, having been forewarned of possible trouble, were on hand to witness and quell the mayhem.

Winters, according to a number of officers, was running through the crowds, brandishing a large blade. Garda McGillion, Kevin Street, saw a man scrambling backwards, “trying to defend himself from Winters of the Coombe, who had a butcher’s knife in his hand. The man fell, and a crowd gathered around. He saw another man brandishing a bayonet and shouting.”

Winters, still holding the blade, found himself in trouble. He collapsed at the feet of Garda Thomas McGann of Malahide. “There was blood on the knife and on the man’s face and left hand,” McGann recalled. “The man said: ‘Guard, save me. I am dying.’”

Winters was lifted over the railings to safety. Other Hannigan’s Army recruits were rounded up in varied states of bloodiness.

Hannigan, meanwhile, sat in a car outside the venue.

The State’s case was quite solid, though Hannigan’s defence counsel didn’t see it that way. Addressing the jury on behalf of the alleged gang leader, lawyer Mr Sherry said the prosecution lacked evidence and it “would only mean a waste of their time and the Court’s time to place him in the witness box.”

The defence lawyer for the remaining men agreed, and said there was no proof that anyone in the dock had stabbed either Towell or Kinsella.

Previously, there had been evidence. From his hospital bed, Towell had identified Winters as the man who put a hole through his body. Before the trial, Towell had an apparent change of memory, and backtracked.

On Saturday, November 23rd, 1940, a jury took 3 hours and 40 minutes to each guilty verdicts in all cases but one. Eleven of the men were convicted of conspiracy, riot, assault, wounding with intent to cause grievous bodily harm and unlawful assembly. One man, Laurence Campion, was found not guilty of all charges.

“Women faint on hearing sentences” topped an Irish Times article a few days later when the men were told their fate; stints of penal servitude ranging from a year suspended at the low end to the most severe punishment – reserved for Hannigan and Winters – of seven years total.

Justice Maguire, the day after sentencing, addressed in court a matter which he overlooked – commending the gardaí who worked the case, who, he said, “acted in the most praiseworthy manner throughout. It is only right I should make public commendation of the fact.”

The sentences were later deemed “unduly severe” and were reduced the following March. Convictions in relation to Kinsella, in particular, were quashed due to lack of evidence.

Below is a list of the 12 men charged after the Battle of Baldoyle and their total concurrent sentences of penal servitude for the various offences.