They must be held to account’: Mary Lou McDonald says Taoiseach has refused request to recall the Dáil

Alan Kelly said he has been in politics a long time and has rarely seen the public so angry about something. 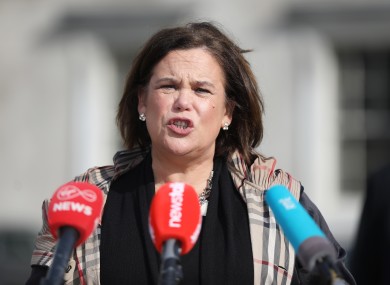 THE SINN FÉIN leader Mary Lou McDonald has said that Taoiseach Micheál Martin has refused her request to recall the Dáil in the wake of the latest government controversy that has erupted in the last 24 hours.

She has joined Labour leader Alan Kelly and a number of other opposition TDs calling for the Dáil to be recalled after another bad week for the government.

Dara Calleary today became the second Fianna Fáil agriculture minister to lose his job in as many months, as he resigned in the wake of the Oireachtas Golf Society event on Wednesday night which was attended by over 80 people.

The fallout has seen apologies from a Supreme Court judge, a string of senators and two TDs who were at the event.

The government is also under pressure with schools due to open again next week, and calls are growing to discuss the latest developments around Covid-19 in the Dáil.

In a tweet, Sinn Féin’s McDonald said: “Have spoken with the Taoiseach. He has refused my request to recall the Dáil.

“He is wrong. The government is increasingly chaotic, confused, with no direction. They must be held to account.”

Labour’s Alan Kelly also called for the Dáil to be recalled in the wake of the scandal.

He said: “There must be a new government Minister put in place to deal with the outbreaks we have seen in the meat processing sector. This cannot be left for three weeks while there are still clusters appearing in meat factories.

It is essential now that the Taoiseach recall the Dáil next week so that a new Minister can be appointed and those in our parliament who attended the dinner can make statements. Further, the Dáil must meet to deal with the critical issues facing our country including the reopening of our schools, the Leaving Cert and the confusion over Covid-19 restrictions.

Speaking on RTÉ’s News at One, Kelly said he has been in politics a long time and has rarely seen the public so angry about something.

He called on Taoiseach Micheál Martin to talk to European Commissioner for Trade Phil Hogan about his attendance at the event and state publicly whether or not he has confidence in Hogan.

In a statement on Twitter this morning, Hogan said he was assured by the organisers that the arrangements in place complied with the government’s public health guidelines.

The Commissioner also said he restricted movements for two weeks after entering the country.

“Prior to the event, I had complied fully with the government’s quarantine requirements, having been in Ireland since late July,” he added.

In relation to the attendance of Supreme Court judge Seamus Woulfe, Kelly said: “If he was still the Attorney General, he wouldn’t be in the position of Attorney General now, there’s no doubt about that.

“Obviously there is a separation of powers here. But having said that, I’m very uncomfortable that a judge was at an event like this and I don’t think it’s appropriate.”

Kelly said the Chief Justice will now likely “sit down and have a long conversation” with Woulfe about his attendance and position.

Speaking on the same programme, Minister for Public Expenditure and Reform Michael McGrath said: “I think it’s very obvious that the event should not have taken place, and those who attended, should not have attended.”

In relation to Woulfe, McGrath stated: “I am speaking as a member and on behalf of government and so I do have to uphold our Constitution and respect the separation of powers … but it is up to each person, irrespective of what position they hold, to give an account for themselves, of what they did, the reasoning behind their decision, and their response to that now.”

McGrath said it is “not acceptable” that people in “very privileged positions” are not abiding to the same rules as the general public.

Any comments as to why and who advised Mr Phil Hogan to make this account?  Where does the responsibility lie?  Is the Hotel duty bound to refuse such an event.  Regarding contact tracing in the event of COVID-19, I take it that the Hotel have all the relevant details to make contact with each and everyone who attended this Golf Society event.  Quote as above:  It definitely infers that the responsibility rests with the hotel and the people who organised the event ie Government.  Hogan said he was assured by the organisers that the arrangements in place complied with the government’s public health guidelines.