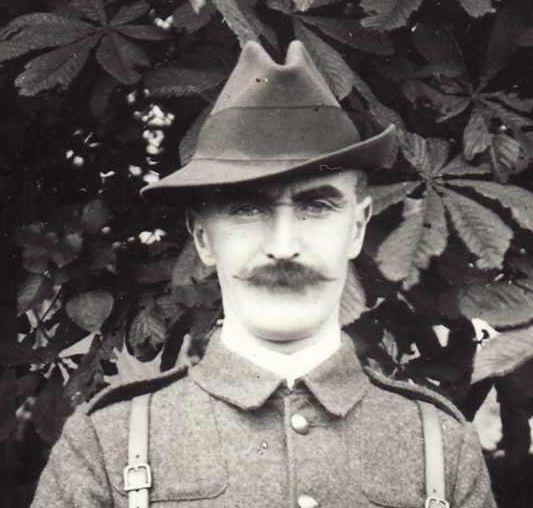 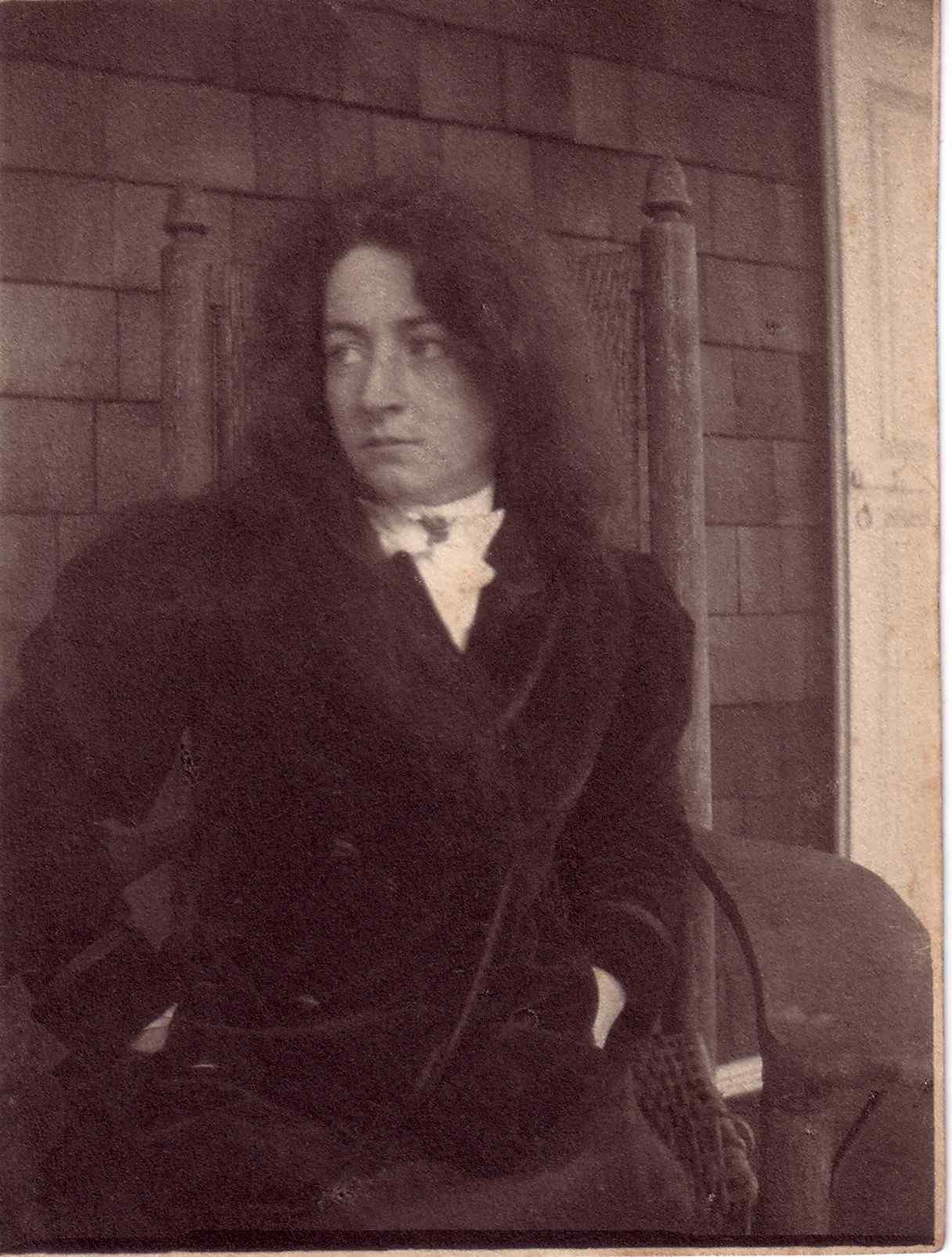 Michael Joseph O’Rahilly, “The O’Rahilly” (see here),
co-founder of the Irish Volunteers (which became the IRA),
the only leader of the 1916 Rising to die in action,
born Michael Joseph Rahilly, 22nd Apr 1875, Ballylongford, Co.Kerry,
educ local national school Oct 1880 – Sept 1889 [Bourke, 1967].
He was educ Clongowes 1890-93.
He was in class with Paddy O’Mara. Also friends with his older brother James O’Mara at Clongowes.
Michael Joseph’s nephew Dick Humphreys would much later marry James O’Mara’s daughter.
In a letter of Oct 1890 [P106/51], his sister Anna teases him about some girl: “I do not think Auburn Tresses would admire that photograph as much as the original.”

Researched family tree:
He researched family tree since about age 18 [O’Rahilly, 1991, p.45], around 1893.
At first he could not trace beyond Michael Rahilly, but there was a story of a connection to the poet.
He rode bicycle all round Co.Kerry, interviewing all families of Rahilly name.

He left Clongowes 1893.
Met his future wife Nancy Brown summer 1893.
He was educ Royal University of Ireland, Dublin, went in late 1893, medical faculty.
Got sick with tuberculosis, left university 1894.
Described as “medical student”, 108 South Circular Rd, Dublin, when he wit his sister’s mar settlement 1895.
His father died 1896. He abandoned studies to take care of the family business in Ballylongford.
Justice of the Peace: Like his father, he served as Justice of the Peace. Described as such in [Deed, Nov 1898].
He heard Nannie had been proposed to in America. Decided it was now or never.
He sold the family business in Ballylongford. Put up an ad in June 1898. Sold it for low price. He couldn’t wait to get out of Ballylongford. Old house sold to Finucane 3 Sept 1898, though sale of new house seems to have taken longer.
He sailed for New York Sept 1898, going first to Amsterdam to buy a diamond engagement ring for Nannie [O’Rahilly, 1991].

He mar 15th Apr 1899, New York, to Nancy Brown [Nannie, born 4th Sept 1875].
They had a lot of money on both sides.
Honeymoon was grand tour of Europe – France, Austria, Italy.
She spoke fluent French after her schooling. He learnt French too. French was a normal language spoken in their home before their return to Ireland 1909 [Aodogán], and after that, Irish.

He wrote his surname “ua Rathghaille” in his entry

at 40 Herbert Park in [Census, 2 April 1911]. He filled in the census form in Irish. House has 12 rooms, they live with 2 servants. Also in the house is “Síghle Brún” (Sheila Brown, born 1890, America, unidentified relation of Nancy).
He bought a De Dion Bouton automobile c.1911.
He was very musical. Sean T. O’Kelly (later President of Ireland) remembered him singing “The Camptown Races” (search YouTube). This became a favourite song in our family.
He helped produce and wrote for Arthur Griffith’s newspaper Sinn Fein (successor to United Irishman, in existence 1906-14).

Protest against Coronation and Royal Visit, 1911:
George V succeeded in 1910. His coronation was planned for 1911, to be followed by a Royal Visit to Ireland.
See letter from The O’Rahilly opposing the visit in Freemans Journal, April 3, 1911.
The coronation was 22 June 1911. That day, The O’Rahilly addressed a massive Anti-Coronation meeting in Dublin [Mac Eoin, 1980, p.130].
He then protested the Royal Visit of the king to Ireland, 7th-12th July 1911. He erected a banner across Grafton St: “Thou art not conquered yet, dear land”. The banner was seized, but not before much publicity was gained [O’Rahilly, 1991].
No British monarch visited southern Ireland again until Elizabeth II in 2011.

[Aodogán’s papers] have letter to The O’Rahilly, 22nd Jan 1912, from one Seán Ó Cuill, claiming to have invented perpetual movement: “we must act quickly”.
He joined Executive Committee of Gaelic League Mar 1912. See Gaelic type created by The O’Rahilly (and closer and closer).
Spent months on massive project translating Dublin street names into Irish. Many of the translations seen today are originally by The O’Rahilly.
In 1912 he built a summer house at Ventry, Co.Kerry (in the Gaeltacht).

Nancy was pregnant when her husband was killed, the child was born 3 months after his death.
She supported her husband’s politics, and became very active after his death.
She was vice-president of Cumann na mBan autumn 1917.
Nancy and Nell and Anno and Sighle all worked hard on the election of Desmond Fitzgerald of Sinn Fein as MP for Pembroke (Donnybrook, Ballsbridge, Ringsend) in the general election, Dec 1918. Fitzgerald’s election in a “Unionist” area was considered surprising, but the vote shows the area was in fact only 1/3 Unionist.

“Madam O’Rahilly” was on Provisional Committee of Cumann na mBan 1920-21, in War of Independence.
[P106/96] shows that she was one of the speakers at a big gathering of Irish-American friends of Ireland on 18 Jan 1920, at Lexington Opera House, Lexington Avenue, New York. There were 5,000 people in the audience.
She was on executive of White Cross Fund, end of 1920 [Ward, 1983]. The Irish White Cross Society was founded Jan 1921 to cope with distress and destitution in Ireland during the War of Independence.
Though she did not participate in Cumann na mBan’s dangerous field assistance to the IRA in War of Independence.
She was regarded as an honorary figurehead by militant younger members [Ward, 1983].

“Madam O’Rahilly” and “Sheila Humphreys” signed appeal by Irish National Aid Association for the relief of Irish political prisoners, post-1931.
She did charity work for Society of Saint Vincent de Paul.
She lived 40 Herbert Park until her death.

As a student in the 1890s, The O’Rahilly carved his name on a wooden rail in the Gaiety Theatre in Dublin.
See larger and full size. See other shot.
The carving is now preserved in the Kilmainham Gaol Museum.
See 2016 photo.
See also the writing desk of The O’Rahilly.
See also Richard Rahilly carving his name. 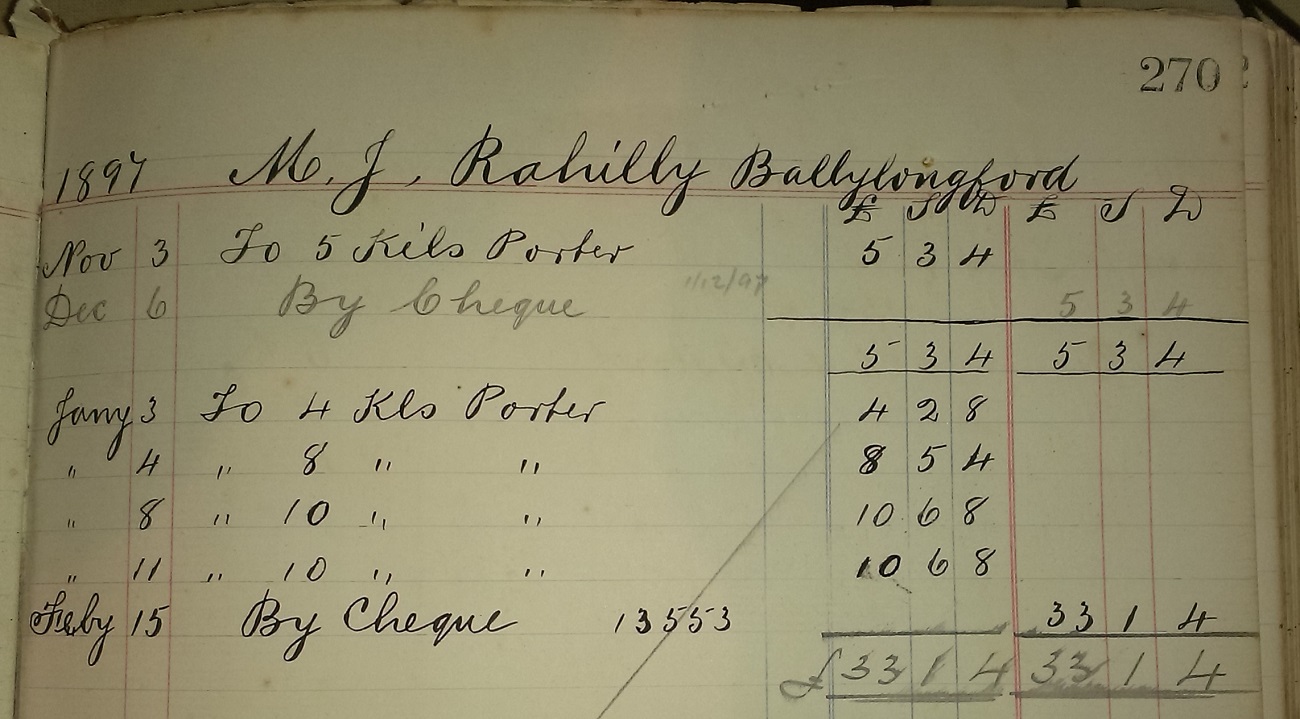 The O’Rahilly sold the Ballylongford business in 1898.
The account for him with Tim O’Connor of Tarbert ends in Feb 1898.
See larger and full size.

The 1903 Gordon Bennett motor race.
The O’Rahilly went off to watch the race just as his wife was about to give birth to Mac in July 1903.
The race is featured in the story “After The Race” in Joyce’s Dubliners.

Fred:  Including this Link and an article written when people of Ireland stood together behind Connolly’s grandson to have certain houses in Moore Street, directly linked to the Rising as it happened in 1916. https://www.thejournal.ie/government-says-16-moore-street-the-right-building-1684488-Sep2014/

Article written 2005 when the historic houses faced demolition and a new development was planned.  It is 2020 when people power achieved a waiver and this is what is wanted in relation to The O’Rahilly’s residence in Herbert Park, Dublin 4.  Dublin 4 is a myriad of sources of history associated with the Easter Rising, Independence, Civil War and yet no building provides this history.

George Santayana ‘Those who forget history are condemned to repeat it’

and the Powers that be of this Country are prepared to sanction its demolition and replace it with a shopping mall.

What is this mentality about? Most definitely it is not about History and the eminence of men who worked, wrote, fought and died for its emergence.

What a disappointment to see the emerging capitalist focus and the removal of a sense of Moral History from the Island of Ireland.

The Peace Process bodes a chance and acceptance for people in the North of Ireland as the Island of Ireland embraces diversity and Unity.

Today we hear of an enterprising endeavour that will honour a history of Shipbuilding. The docklands area (tax incentive attractions) will see the reconstruction of a model of the Titanic, scheduled for 2012. What an enterprise and initiative that will lead to tourism?

Moore Street is about culture; changes are happening but let us not lose this house belonging to James Connolly, his spirit and the spirits of all those men who sought for an Island of Ireland. Shame on us.

Living in D4, I have the advantage of meeting many people with different stories.

Today, a woman whom I meet walking my dog, stopped to have a chat. The subject turned to politics. This woman is probably in her eighties so her interest in politics is enlightening to me.

She made a comment…..It made be me think about just how far removed we are from a fascist state regime. (this is just a personal thought/fear).

It is simple. We are presently consumed with problems relating to health that occupy a considerable proportion of Minister Harney’s time, as Health Minister. She is also acting as deputy for Justice Equality and Law Reform.

The question she raised:

How come the leading portfolios are the responsibility of those who have less than 4% of the vote?

Please preserve the home of James Connolly who was executed in 1916 and a prodigious writer in the socialist theme.

Quotation: Goethe
‘What we do not understand, we do not possess’

The home of The O’Rahilly must remain.  COVID-19 surely tells us we have enough development especially in Dublin 4, we need our history, as we are still a very young State.