Plans lodged for demolition of The O’Rahilly house 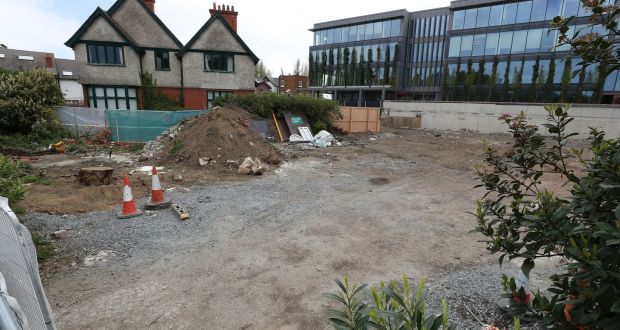 No 40, Herbert Park, in Dublin 4, was the home of Michael Joseph O’Rahilly, known as The O’Rahilly, the only leader of the 1916 Rising to die in battle. Photograph: Nick Bradshaw

Plans for the demolition of the home of 1916 Rising leader The O’Rahilly in Ballsbridge, Dublin, have been lodged with An Bord Pleanála.

The McSharry and Kennedy building families, owners of the Herbert Park Hotel, want to build an aparthotel and 105 apartments fronting on to Herbert Park on the site of three Edwardian villas.

Two of the houses, numbers 36 and 38 Herbert Park, have recently been demolished. The last remaining house, number 40, was the home of Michael Joseph O’Rahilly, known as The O’Rahilly, the only leader of the Rising to die in battle.

The house was built in 1907 for the World’s Fair Irish International Exhibition to promote Irish industry. The O’Rahilly was the first occupant of number 40 in 1909 and his widow, Nancy, lived there until her death in 1961.

Lordglen Ltd, the hotel owners’ development company, was in 2018 granted permission for the demolition of numbers 36 and 38 as part of the extension of an aparthotel, and 18 apartments in two blocks. However, this scheme never went ahead. The company subsequently bought number 40 and is now seeking to demolish it and redevelop the site of all three houses.

Proinsias O’Rahilly, a grandson of The O’Rahilly and a member of the 1916 Relatives Alliance, said he was “lost for words” that the demolition of the house was being pursued. He said it should be listed on the record of protected structures (RPS) and be declared a National Monument to preserve it from destruction.

“The meetings which took place in the house played a pivotal role in the foundation of the State,” he said.

Roger Casement, Éamon de Valera, James Connolly and Michael Collins were among those who met in the house and as late as the 1970s a revolver belonging to Collins was discovered in its rafters, Mr O’Rahilly said.

However, an architectural heritage report submitted on behalf of Derryroe, another of the hotel owners’ companies, said the house is “not of significant architectural or heritage value”.

While the association with Michael and Nancy O’Rahilly “adds some historical interest to No 40, it is not considered a particularly significant site in respect of the events of the inauguration of either the Irish Volunteer Force or Cumann na mBan,” it said.

The developers propose to commemorate the former residents with a plaque.

Sinn Féin councillor Micheál Mac Donncha has submitted a motion to Dublin City Council to have number 40 added to the RPS. He said no demolition should be permitted before it could be assessed for listing. The redevelopment plans will be presented to Dublin city councillors on Monday.

“It is amazing that anyone would say that this in not a building of major historical significance. As the last home of The O’Rahilly and a house where key meetings in relation to the 1916 meeting took place, it is clearly of major significance,” Mr Mac Donncha said.

Sir, May I as an Englishman add my support to the letter of Pat Wallace, writing, as do I, from Dublin 4.
We, the English, have always admired a gallant foe, such as Michel Ney at Waterloo, and The O’Rahilly (Ballylongford and Clongowes) was certainly that on 28 and 29 April 1916, dying as he did in Sackville Lane.

I have now lived among the fun loving, golf playing Irish for fifty two years.  I confess it is not long enough. I shall never understand them.

They seem to think that Wellington was English and born in a stables and that Waterloo was a defeat.. They regard themselves as a colony of the British Empire but were running it under John Redmond (Clongowes) with Asquith’s Liberals in 1910-1914.
They hate the English but it was the Welsh who partitioned Ireland in 1920 (Lloyd George and Hamar Greenwood) along with the Scots (Bonar Law).
And it was the Scots and Welsh who didn’t turn up at Lansdowne Road in 1972 merely because of a slight altercation in Derry/ Londonderry. After all the Irish played and beat England at Twickenham within a week or so after Bloody Sunday..
Now they want to remove the last traces of The O’Rahilly from Herbert Park. What is the matter with them?
Obviously only half the job was done at Easter 1916.  Getting rid of the Brits was only a part and the lesser part. Contempt for Ireland’s heritage is alive and well in Dublin 4.
Kind regards,
Gerald Morgan OM FTCD (Leader: English Parliamentary Party, 2001)

Letter published Irish Times Thursday 27th August, 2020  (transcribed)
Planned demolitin of O’Rahilly house
It is with a sense of weariness that I read on Monday in The Irish times a report that Dublin City Council has endorsed the proposed building of a 12 storey apartment block at Herbert Park, and the demolition of an intact and well-built early 20th century house from which The O’Rahilly left for his death in 1916 (Council backs demolition of O’Rahilly house”, (News August 24th).
Herbert Park was gift to the citizens of Dublin from the Pembroke Estate, a developer.  Would that the present developers gift us this bit of land and relative seclusion for the children of Dublin and their parents.
I walk frequently in the park and know that this block will overlook, shadow and diminish the qualities of the lovely playground that is used by the children all the time.
In my work as director of Wood Quay, the largest urban Viking site in northern Europe in the 1970’s and 1980’s, I dreamt that in time Dublin City Council would safeguard and understand the heritage of Dublin.  Vainly, as it has turned out, I also hoped establish a “Museum of Dublin”.
Is the legacy we have inherited yet again to be demolished and handed to developers and their bankers with the encouragement and backing of Dublin City Council and its planning department?  We have learned nothing. – Yours, etc Pat Wallace, Dublin 4.