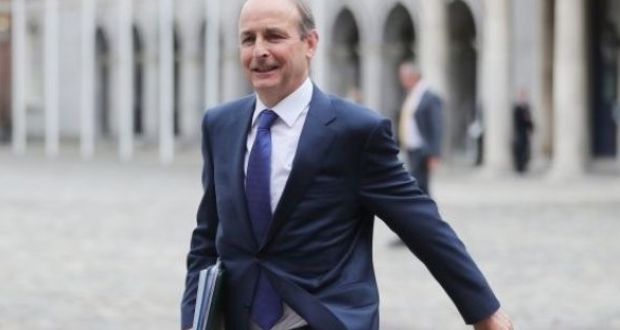 Taoiseach Micheál Martin has plenty of enemies behind him. But he has far greater problems facing him. Photograph: Niall Carson/PA Wire

It is often said that any party leader’s deadliest enemies are not facing him across the floor of parliament but behind him on his own benches. Micheál Martin seems determined to put the theory to the test. He told one recent interviewer that he hadn’t “wasted an hour” since he became Taoiseach.

He certainly hasn’t wasted any time adding to his already impressive list of foes and begrudgers in his own party. In his first three weeks as Taoiseach he has assembled more enemies than Bertie Ahern managed in a decade. Some of this was unavoidable, some of it wasn’t. Some of it is part of a huge gamble that Fianna Fáil can make quick progress on health and housing where others have failed. Some of it was just the events and mishaps that befall all governments at some stage (though few so quickly).

While there are certainly people in Fianna Fáil who are actively hostile to their leader, and would knife him given the opportunity, I do not think that the party has completely taken leave of its senses

But whatever the reasons, Martin now has a substantial quota of hostile TDs within his own parliamentary party. What will that mean for his leadership? There is a view in some circles that this now presents a clear and present danger to Martin – that his TDs will cut his throat and throw him overboard at the first opportunity. That holding off a heave will become the story of his premiership.

I disagree. While there are certainly people in Fianna Fáil who are actively hostile to their leader, and would knife him given the opportunity, I do not think that the party has completely taken leave of its senses. Can you imagine the public reaction to Fianna Fáil if Martin was to face a challenge? Fianna Fáil is no longer the unassailable juggernaut of Irish politics, but it is not ready to consign itself to the political scrapheap just yet, I think.

In fact, Martin’s problems are a lot bigger than sedition of the backbenches. His Government – and therefore his party – could be destroyed by any number of potential threats. Among all of these, there are three that are bigger than any others.

Inside Politics · How damaged is Micheál Martin’s leadership? (Live at The Irish Times Summer Nights Festival)

The first is a bad second wave of the pandemic. I am no virologist so I will save you my speculations about the likelihood or otherwise of this; but it is clearly a possibility, and a live one at that. That poses two dangers. The first is that the second wave overwhelms the health service – remember watching the reports from Bergamo in March and thinking how on earth could we cope if that happened here? More likely perhaps is that a second wave would be less catastrophic but still sufficiently serious to require a re-imposition of some form of the lockdown. Close the schools again. Work from home. Shut down retail. No travel. I think this would be very difficult for the Government to do. But for fear of the first danger, it would have to do it – and take the consequences.

The final thing that should worry Martin is an old enemy: Brexit. Johnson is likely to do what he did before – threaten the divil and all and then retreat

And the consequences would be disastrous. A further shutdown would mean the end for many small businesses; I have spent a few days in west Cork this week and many local businesses are hanging on by their fingernails. They won’t survive a further shutdown. These are the small businesses that keep coastal and rural communities alive when the holidaymakers depart. It would be a social and economic disaster if they close.

The second threat to the Government is also coronavirus-related. The Government will record a deficit this year that could be as large as €30 billion. Context is important when considering these sorts of numbers so bear this in mind – it costs €70-odd billion to run the State every year. There will be another whopping deficit next year, even if things improve and the economy starts to recover.

The money will be borrowed and will be added to the national debt. That’s okay – this is the sensible thing to do. But it requires the bond markets – where countries find the loans to sustain them – to keep lending. That requires a stable international environment and a consequent belief by lenders that they will be repaid. And that stability could be upset by many things.

Aside from the effects of the virus on the world economically and politically, there are two other threats: the US presidential election, in which Donald Trump is, I think, likely to provoke trade conflict with China during the campaign and a failure by the European Union to agree how to fund a viable recovery plan. If any of these things spook the markets, then Ireland will find it more difficult and more expensive to borrow the money it needs. If that happens, it would destroy this Government pretty quickly.

The final thing that should worry Martin is an old enemy: Brexit. Boris Johnson is likely to do what he did before, and what Theresa May did before him – threaten the divil and all and then retreat at the last minute to make a deal, while claiming a great victory. But in an unstable environment, in a government where ideologues hold significant sway and with the pandemic promising cover for a no-deal, there is no guarantee – at all – that the UK government will act in the interests of the UK. A no-deal Brexit would hammer the Republic’s stuttering economy and heighten all sorts of tensions in the North.

These three threats have one thing in common: it is outside Ireland’s control to influence. They will either happen, or they will not, and Martin and his Ministers will just have to deal with them. The Fianna Fáil leader certainly has plenty of enemies behind him. But he has far greater problems facing him. If I were him, I would be a lot more worried about all this than about how annoyed Barry Cowen or Jim O’Callaghan is this morning.