‘20k on your head’: Threats seen as response to work done by force in combatting crime 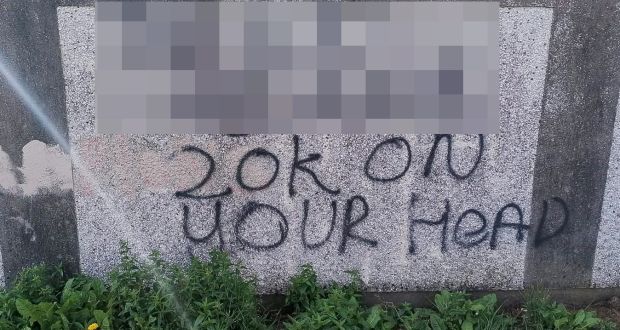 Pressure on drug dealers in Drogheda by gardaí is believed to be behind graffiti that has appeared around the town in recent weeks (pictured). Photograph: Ciara Wilkinson

Pressure on drug dealers in Drogheda by gardaí is believed to be behind graffiti that has appeared around the town in recent weeks.

The most recent incident, on the wall of an estate on the south side of the town, names gardaí and in relation to one says “20k on your head”.

The threats, which are not the first to be spray painted around the town, are seen as a response to the continued pressure on dealers which has resulted in a shortage of drugs and a subsequent increase in price.

One Garda source said: “Gardaí are working very hard and have had great support from the community throughout Drogheda.

“The community sees that these efforts are paying off and as a result the support in the community is increasing.”

Gardaí have seen additional resources allocated to Drogheda to help tackle the gangland feud which has blighted the town for the last couple of years.

With some of the alleged key figures either no longer in the town, or lying low, gardaí are aware that others will try to fill the void that has been left.

“There will always be people who are below the radar, who have kept their head down and who have not yet been in trouble [with the courts].

“Gardaí in Drogheda have had successes in disrupting the drug dealers and the graffiti, like that sprayed over the weekend, is an indication of that,” said one source.

In their most recent seizure last week, cannabis estimated to be worth €61,000 was found in two separate growhouses along with a small quantity of cannabis herb following a search of a house in Baltray, just outside Drogheda.

The mayor of Drogheda, Kevin Callan, has condemned the graffiti saying, “any such intimidation of An Garda Síochána or any member of the force must not stand and is totally inconsistent with the support the gardaí receive from the community”.

“We will not as a town tolerate this type of thuggery and intimidation and we stand as one with the gardaí who do marvellous work for us all every day and every night,” he said.

Garda Derek O’Donoghue, Garda Representative Association (GRA) representative for Co Louth said: “Garda members are doing their job so well that a small group is trying to intimidate them from continuing to do such a good job.

“Such threats are a cause of concern. The GRA’s concerns are around the wellbeing and the welfare and of Garda members and there are supports available to them.

“This form of intimidation is an attack on gardaí, the local community and society as a whole,” he added.

The Garda Press Office said: “Gardaí in Drogheda are investigating criminal damage to a wall of housing estate in Drogheda town. The graffiti was reported to gardaí on 12/9/2020. Anyone with information is asked to contact Drogheda Garda station. Enquiries are ongoing.’