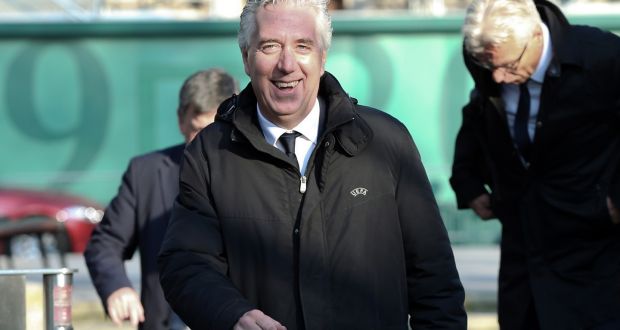 One of the many arresting and bizarre images in Champagne Football, the newly-published book which provides the definitive account of the rise and fall of John Delaney, occurs around the St Patrick’s Day weekend in Dublin in 2018.

Author Mark Tighe, the Sunday Times journalist and colleague of the book’s co-author Paul Rowan, is attending the parade festivities with his family. His phone is pinging with messages from people seeking to speak with him following his sensational story, published despite a dramatic and unsuccessful court injunction by Delaney, of an inexplicable €100,000 payment that had been made by Delaney to the FAI.

One message, though, catches his attention: the sender claims he has information that “showed Delaney’s personal expenditures had been ‘hidden’ in the FAI’s accounts over many years”. A face-to-face meeting is arranged after the contact is absolutely satisfied that his anonymity can be guaranteed. Nonetheless, the narrative recalls: “The person that Tighe met was visibly fearful and distrustful, expressing deep concerns over the possible consequences if it was discovered they had spoken to a journalist about internal FAI affairs.”

It was a stark moment: here was someone with inside information willing to break free of the grip of fear and secrecy and legal intimidation and persuasion and charm and promises which John Delaney used to run the FAI as a kind of personal kingdom.

The bizarre thing, in retrospect, was that Delaney ran the FAI show as he did in broad daylight. The entire country knew about his eye-watering salary which at one stage tipped €400,000. Everyone knew about the mad nights out with the fans in Sopot and elsewhere, about the singing of the rebel ballad in the pub, about the €50,000 birthday bash that was both lavish and tacky. It was all reported. As these events happened in real time, Delaney usually managed to explain away the uncomfortable moments through strategically chosen radio or television interviews, all the while promoting the idea that he was regarded as one of the bright young things of European football administration; that he was on his way with Uefa.

Delaney was a figurehead of an era of big, noisy excess in Irish football, with prestige managers on gargantuan contracts guiding the Republic of Ireland team to successive European Championships in 2012 and 2016. As events suited, Delaney could shapeshift from man of the people, now laying on a free bar for travelling supporters now the nimble courtier in the halls of European football, now ruling FAI board meetings with iron fist inside velvet glove.

The most chilling parts of Champagne Football lie in the early chapters which recount the efficiency and ruthlessness with which Delaney used the fallout from the Saipan debacle in the 2002 World Cup to parlay a relatively minor role in the association into a complete power grab. What’s shocking is how easy it all was for him: he assumed control through braggadocio and force of personality. Most board members acquiesced and fell into line and became almost slavish in their loyalty: the few that dissented were marginalised and forced out – the pages are littered with once big names in Irish football who found themselves with nowhere left to go.

And the thing about the book is that it is very soberly chronicled. It is scrupulously balanced. The authors give space to those who backed Delaney and their reasons for praising him and it explains how he consolidated his reputation among the grassroots football clubs across the country through grants and tickets and appearances. “I’m going to shock you here now,” says John Byrne, a former board of management member and a significant source in the book, “but in the first 18 months, he was brilliant. Everything was done for the right reasons.”

It’s a fascinating observation and raises all kinds of questions. When, exactly, did Delaney start doing things for the wrong reasons? And why? What we can never know, of course, is what Delaney believed he was at through all those years when his ego clearly ran amok over good sense. It’s clear from the beginning that Delaney possessed a kind of sales genius at self promotion. But did he believe it himself?

There’s a brilliant moment early on where Byrne recalls trying to convince the then government that Delaney was the man to become CEO. This was late in 2004. John O’Donoghue, the sports minister is there with Bertie Ahern, the taoiseach. “Bertie had more doubts than O’Donoghue. Bertie could sniff a wide boy just like that. He had a sixth f***in’ sense. It’s nothing you could put your finger on. Bertie would say, “Ah Jaysus Christ are you f***in’ sure about this fella.”

A book about the finances of a small football association should be mind-numbingly dull. The reason that Champagne Football is so gripping is that it is about the intoxicating effect of power. Everyone could see as the years passed that Delaney was flying closer and closer to the sun and everyone knew how that fable must end. But could he? Did he? But then, what could bring about his downfall when he had the FAI boardroom in his pocket?

Even after the revelation of the €100,000 payment story, the writing wasn’t necessarily on the wall for Delaney. Curiously, had he not attempted that 11th hour legal intervention to kill the story, it may have blown over. The initial reaction was puzzlement. “It does seem a bit unusual,” was as far as then taoiseach Leo Varadkar would go on the story.

Brian Kerr, one of the most prominent and talented football people marginalised in the Delaney era, put it more succinctly when asked about the issue when working as a television analyst. Kerr pointed out that it was strange that an organisation with a fifty million quid turnover needed a loan of a hundred grand. “I wouldn’t have thought a hundred thousand went very far. But, you know, some very strange things have happened, some bizarre things have happened around the FAI over the last number of years.”

The observation was prophetic because shortly afterwards, Mark Tighe’s contact furnished him with the information which set flame to the empire – that the cash-strapped FAI was covering Delaney’s rent to the tune of three grand a month, that it was picking up the tabs for luxury foreign travel and the company credit used “with wild abandon”. Not long after those stories appeared, the drawbridge fell down on the moat that Delaney had constructed. It was endgame.

Champagne Football works as both a jaw-dropping story and a morality tale. It’s also a sombre indictment of how Ireland works, with the threat of litigation and the buying of silences. For years, football writers such as Emmet Malone on these pages, Neil O’Riordan in the Irish Sun, Dan McDonnell in the Irish Independent, as well as RTÉ’s Tony O’Donoghue, have been prominent in their coverage of the CEO’s excesses.

Speculation will continue as to the person responsible for the envelope left on Tighe’s desk containing the photocopies of the relevant one hundred grand payments. He had returned to the office that Friday evening to file a different story. The account of how Tighe sought confirmation of the story and the swift ascent to court proceedings is riveting. And it marks the beginning of the end.

The work that Rowan and Tighe have done to put this surreal story together is a public service. It’s sometimes funny and sometimes grim and sometimes just depressing. Champagne Football should serve as a kind of full stop for the Football Association of Ireland. Irish football lived fast and foolishly in its two decades when Delaney was king maker.