Trial ‘an important time in our history, repercussions of which continue to reverberate’

about 10 hours ago Updated: 37 minutes ago 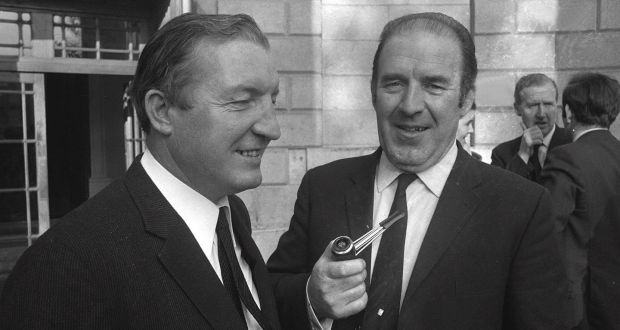 Then ministers Charles Haughey (left) and Neil Blaney were sacked over the arms crisis. File photograph: The Irish Times

The late chief of staff of the IRA, Sean Mac Stiofáin, was a Garda Special Branch informer and tipped off the authorities about the arrival of weaponry that led to the Arms Trial, Fianna Fáil TD Seán Haughey has declared.

Demanding the release of State files, the son of former taoiseach Charles J Haughey said an incorrect version had remained on the record for the past 50 years.

Charles Haughey and Neil Blaney were dismissed as cabinet ministers by Jack Lynch after they were alleged to have been involved in a conspiracy to smuggle arms to the IRA.

In the later Arms Trial, charges against Mr Blaney were dropped, and Mr Haughey and the other alleged conspirators were found not guilty. Mr Blaney claimed that the then government had known about the plan.

“Crucially the Dáil record can only be set straight if the State confirms that the tip-off about the flight came from Mac Stiofáin,” Seán Haughey told Minister for Justice Helen McEntee in a Dáil debate on Tuesday night .

“The continued concealment of Mac Stiofáin’s tales as an informer is tantamount to endorsing and perpetuating his agenda, which was to disrupt and undermine democracy and assist the role of the Provisional IRA”.

This is “perpetuating the deception of this House and belittling and defaming the memory of Captain James Kelly, an honourable soldier who should have never been put on trial”, and of Col Michael Hefferon, director of military intelligence at the time.

Ms McEntee has pledged to review and release “as appropriate” any relevant records that may exist in her department in relation to the 1970 arms trial.

Mr Haughey acknowledged that some files in the State’s possession are still sensitive 50 years on, but “these files could be looked at, perhaps by a high court judge”, he suggested.

The Minister should “declassify all files relating to the information he provided to the Special Branch”, he said, adding that the Dáil had been given an inaccurate report about how the State had learned of the arms’ arrival.

“It was claimed that the scheduled flight had been discovered by accident by civil servants who are concerned about certain paperwork issues,” the Dublin TD said.

Mr Haughey called on the Minister to confirm that Sean Mac Stiofáin, a member of the IRA army council, was the informer who told the Special Branch about guns being flown into Dublin Airport that foreshadowed the arms crisis.

Replying, the Minister for Justice said some records could not be released by the State even now because they contain sensitive reports or potentially defamatory information.

“It should be noted that these files are subject to periodic review, including as to whether or not they should be released,” she said, adding that it would not be appropriate for her as Minister to “speculate” about the case.

She was speaking in the Dáil on the 50th anniversary of the arms trial, which along with the related scandal engulfed the State in the early years of the Troubles and came to be known as the arms crisis.

“It is difficult to see how different accounts can be validated, or adjudicated on at this remove, particularly for most of those who are involved are no longer in a position to defend themselves”.

Mr Haughey Snr was one of four defendants in the trial, also including Captain Kelly, Col Hefferon and then cabinet member Mr Blaney, accused of assisting a plan to illegally import arms for the IRA.

The trial, the Minister accepted, “was an important time in our history, repercussions of which continue to reverberate to this day” and caused one of the most significant political controversies in the State’s history.

Many Arms Trial records were released to the National Archives in 2000. Mr Haughey said Sean Mac Stiofáin had been identified in a new book to be published on Wednesday – Deception and Lies, the Hidden History of the Arms Trial, by David Burke.

“The author reveals that Mac Stiofáin exploited his position to create mischief for his arch rival, Cathal Goulding.”

He said an incorrect version of events has “remained on the record of this House ever since. It is not satisfactory that the official record of any event, let alone one as important as this, should be misleading.”

Ms McEntee said it would not be appropriate for her to speculate, but she promised that “ if any records do exist that can be released and reviewed”, that would be done and they “will be released as appropriate”.