Shelbourne Hotel statues to be restored to their plinths 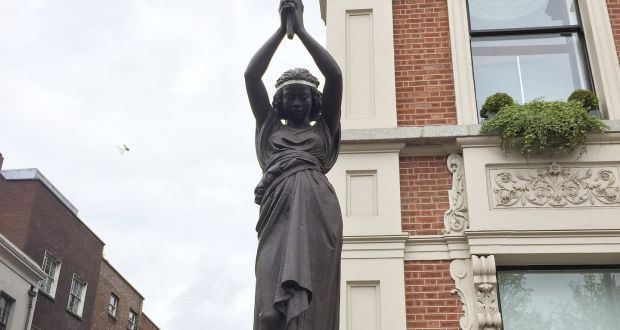 One of the statues, removed by the Shelbourne Hotel – which will now be put back.

The owners of the Shelbourne Hotel are to reinstall four statues which were removed in the mistaken belief that two of them were representations of slave women.

The Shelbourne Hotel on St Stephen’s Green in Dublin is owned by US multinational property company Kennedy Wilson and operated by the Marriott Group. Kennedy Wilson has told Dublin City Council it intends to return the four statues to their plinths outside the front of the hotel where they had stood since 1867.

They were removed in July by hotel management, citing the Black Lives Matter movement and its focus on the legacy of slavery.

The move prompted several complaints to the council that the facade of the hotel, which was restored in 2016, was a protected structure and the removal of the statues was a breach of planning permission.

Former attorney general and minister for justice Michael McDowell was one of those who lodged a complaint with the council.

The statues were originally designed and sculpted by Mathurin Moreau (1822-1912), son of another famous French sculptor, Jean-Baptiste-Louis-Joseph Moreau and were cast in the Val d’Orsne foundry in Paris.

Art historian Kyle Leyden has said the original catalogue from which the four statues were ordered clearly label them not as slaves, but as Egyptian and Nubian women. Mr Leyden said the architect who designed the Shelbourne facade, John McCurdy, would have ordered the statues from the catalogue, which was published in the late 1850s.

Kennedy Wilson commissioned University College Dublin art historian Professor Paula Murphy to examine the statues. An expert on sculpture, she has concluded that they are not depictions of slaves.

The statues will be restored to their plinths once they are cleaned, as there are layers of paint that have to be removed. Their restoration will include a plaque explaining their backgrounds.

A date for their reinstallation has not been established but is likely to happen in the coming weeks.