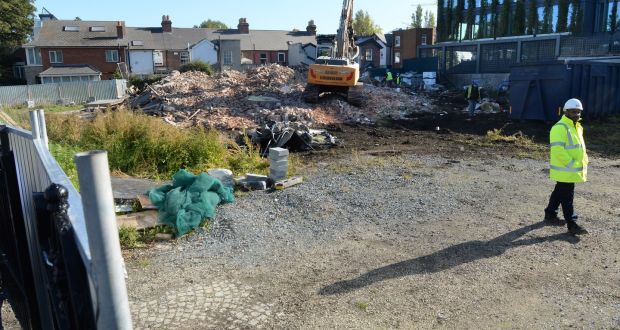 The immediate reconstruction of The O’Rahilly house, which was demolished one week ago, has been ordered by Dublin city councillors.

Councillors on Monday night approved a joint Sinn Féin and Green party motion that “deplores” the demolition of the house at 40 Herbert Park, the former home of Michael Joseph O’Rahilly, the only leader to have been killed fighting during the 1916 Rising.

The motion “calls for the immediate restoration of the house” and follows the decision last week by the council to initiate legal action against the developers over the demolition.

Derryroe Ltd, a company owned by the McSharry and Kennedy families, who own the Herbert Park Hotel, last May applied to An Bord Pleanála for an apartment development on the site of 40 Herbert Park.

Councillors, heritage groups, relatives of 1916 leaders, including O’Rahilly’s grandson Proinsias Ó Rathaille, and local residents objected to the development, which included the demolition of the house.

However, the council’s planning department advised the board to grant the demolition of the house noting it was not on the Record of Protected Structures (RPS) and had “no statutory conservation designations”.

The council’s conservation office twice tried to assess whether the house merited addition to the RPS but was denied.

The council has confirmed solicitors for the developers “questioned the council’s right to interfere with property rights or with the integrity of the [Strategic Housing Development] process”.

However, the council told the solicitors it had an entitlement to pursue the process.

The following day that notice was validated by the council’s building control section.

Early on September 29th the house was demolished. A planning enforcement official attended the site later that day and ordered work on site to stop.

Last Thursday, the council initiated legal proceedings under the building control acts against the developer for “willfully or recklessly submitting information to the Building Control Authority which was false or misleading”.

On Friday the council also issued an enforcement notice under the planning acts for starting development prior to complying with the conditions of planning permission.

In a statement on Friday the council said the notice “broadly speaking requires the cessation of all works pursuant to the permission on site”, until planning conditions which require the agreement of the council had been dealt with.

It said the penalties for non-compliance include fines or potential imprisonment.

However, the enforcement notice did not require the reconstruction of the house, which resulted in councillors putting its restoration forward as an emergency motion.

Sinn Féin and Green Party motion “expresses concern at the planning authority’s view that false or misleading information was provided to the Building Control Authority when seeking validation of the commencement notice for works on the site” and calls for the house to be rebuilt.

Fianna Fáil councillor Deirdre Conroy also submitted a motion, also passed, asking if the house can be “re-built and restored as a Historic Republican Museum”.