A BRITISH undercover police officer who infiltrated protest movements across Europe over seven years made several visits to Ireland, during which he spent time with objectors to the Corrib gas project in north Mayo and met protesters opposed to US military use of Shannon airport.

According to Irish activists, PC Mark Kennedy, a Metropolitan police officer who infiltrated several environmental and anti-capitalist campaigns in Britain and other countries after he adopted the fake identity of Mark Stone in 2003, also took part in the Dublin May Day protests in 2004. Several said he encouraged more confrontational tactics.

Kennedy spent several days in north Mayo in March 2006 and participated in a workshop for the Shell to Sea campaign. Former members of the Rossport solidarity camp, established after the jailing of the Rossport Five in 2005, recall that he advised on the merits of direct action. He also visited the home of one of the Rossport Five, Willie Corduff, with a group of British and Icelandic activists sympathetic to the campaign.

“It’s unfortunate that you take people in good faith,” Mary Corduff said yesterday. “What we would like to know is who he was working for while he was here?”

One former Rossport camp member, who did not want to be identified, said he remembered Kennedy participating in a direct confrontation with gardaí during the Dublin May Day demonstration in 2004.

“I remember him taking off his balaclava in the thick of it . . . which is something we never did,” the activist said.

This allegation was repeated by a Dublin-based activist with the Workers Solidarity Movement, who said Kennedy had stayed at his home twice.

The activist, who did not wish to be identified, said he had met Kennedy several times between 2004 and 2006, both in Ireland and at the G8 protests in Scotland in 2005. “He was very encouraging of the more militant end of direct action,” the activist said.

In an interview given to a Rossport camp member and published, Kennedy stressed it was “really important for campaigns not only in Ireland, in Mayo or in Iceland but also campaigns in Spain, in Italy [to] work together”.

“We need to network and we need to be working on these issues together, exchanging information and ways of doing things, and looking at the ways corporations are putting the pressure on us and sharing that information so that we can go forward and win our struggles,” he said.

“In the future, when things happen, we can carry on and have a better idea of how to protest against these corporations.”

Kennedy visited the gas terminal site at Ballinaboy, including the protest “trailer”. At the time, work by Shell EP Ireland on the terminal had been suspended.

One activist said he met Kennedy at a protest over former US president George Bush’s attendance at the EU-US summit at Dromoland Castle in June 2004.

Another activist, Ciaron O’Reilly, one of five anti-war protesters acquitted of criminally damaging a US military aircraft at Shannon airport in 2006, said he met Kennedy twice in Ireland, including at an event organised by Gluaiseacht, a social justice movement, in Clare in 2005.

Activists in Ireland have been aware of Kennedy’s real identity since last October. “My main concern is not that the police in the UK and Ireland collect information on activists, but that they sometimes act as agent provocateurs in order to discredit the peace movement,” said anti-war activist Ed Horgan.

Labour TD Michael D Higgins has written to the Department of Justice regarding Kennedy’s activities in Ireland. “It is of grave concern,” he said. “This type of activity undermines respect for the law and it is very sinister in that it can damage good causes.”

A spokesman for the department said it had “no information on any alleged activities in this jurisdiction by the person in question”.

‘A living nightmare’: Mark Kennedy in new apartment in the US (Photographer is LA based)

To be expected from those who always want and need to blame others; they cry out mental health and self-harm.

“Mark Kennedy was not just one bad apple. He was part of a system of political policing and abuse of rights.” 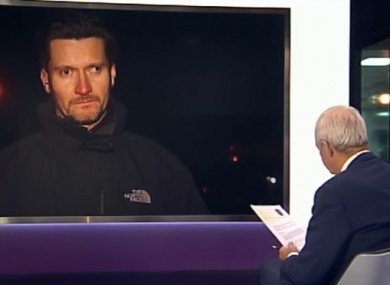 “He had multiple intimate relationships with women using his false identity as an environmental activist called Mark Stone.”

IT SOUNDS LIKE something straight out of a James Bond movie but that is a line from this week’s Dáil transcripts.

During a Leaders’ Question session, the house was informed that an undercover British agent – infamous following an inquiry in the UK – also operated in Ireland.

While the fresh revelations went somewhat under the radar on Wednesday (because of the explosive nature of Brendan Howlin’s contribution to the whistleblower debacle), AAA-PBP TD Paul Murphy told the chamber that the “the security forces here would be very concerned about agents from another country operating in this jurisdiction”.

The Taoiseach was told a British citizen, Mark Kennedy, has been exposed as a “secret member of the national public order intelligence unit” in the UK.

The story of Kennedy has been widely reported about over the years – in both the Guardian and the Daily Mail.

In 2011, details of Kennedy’s double life during which he embedded himself with environmental activists for more than seven years, began to emerge.

The Guardian reported that Kennedy visited more than 22 countries taking part in protests against the building of a dam in Iceland, touring Spain with eco-activists, and penetrating anarchist networks in Germany and Italy.

However, the story has now landed on Irish shores.

Murphy told the Dáil this week: [Mark Kennedy] was in Ireland and it is admitted he was in Ireland on multiple occasions. He participated in the Shell to Sea protests in the Taoiseach’s constituency. He organised meetings here in the run up to the protest in Gleneagles at the G8 in 2005. He was arrested by the gardaí in Dublin on 3 May 2004… He had multiple intimate relationships with women using his false identity as an environmental activist called Mark Stone.

While travelling the world, it’s claimed Kennedy had many sexual relationships with women within the activist movements. https://www.youtube.com/embed/7OuB1eKG51g?wmode=transparent&start= Source: Channel 4 News/YouTube

It resulted in some of these women taking legal action against the police. Subsequently, the Metropolitan Police in the UK published a full apology for ‘totally unacceptable behaviour’ of undercover officers entering into such affairs with women.

A settlement was also reached between the police force and the women.

The Police Inspectorate in the UK also carried out a review into the cases, and called for better oversight of those that carry out covert work.

On Wednesday, Murphy told the Dáil that a woman who was involved in a protest group was in a relationship with Kennedy while he was operating in Ireland.

He highlighted the case of Sarah Hampton, a US citizen who met Kennedy on these shores in 2005.

Outlining what was said in Dublin this week, Murphy read out her statement, in her own words: Finding out that Mark was an undercover police officer brought about a deep depression that seemed impossible to navigate, there were times I almost gave up completely. The process of seeking justice on this case has felt at times belittling, intimidating and downright scary. … I felt I had been raped. I never consented to sleeping with a police officer.

Murphy told the Dáil that Hampton was granted an apology last month by the Met Police.

Following these revelations, there were calls for a full investigation.

The Pitchford inquiry was launched in 2015 following scandals involving officers and women who said they were tricked into relationships.

In Belfast earlier this week, campaigners took a legal case over the failure to include Northern Ireland in Lord Justice Pitchford’s inquiry.

According to the Belfast Telegraph, Jason Kirkpatrick was granted leave to seek a judicial review of the government’s refusal to widen the probe beyond England and Wales.

His lawyers argued that officers attached to the Metropolitan Police and the National Public Order Intelligence Unit secretly travelled to Belfast for spying purposes without PSNI knowledge.

Following the court case in the North this week, and pointing out that a woman in Ireland had also been victim of undercover police officers entering into sexual relationships with women, Murphy said he wanted the Taoiseach to formally request that the inquiry now be extended to Ireland as well. We know the German government has written to the British government seeking the inclusion of the actions of the so-called spy cops in Germany, and we know the Scottish government has done the same. We also know that British undercover police officers were operating in this State yet the Irish government has so far refused to request the inclusion of their activities in that investigation. Why is that?

Murphy said the “political policing” targeted left wing and environmental activists, breaching their right to privacy in this State, which is enshrined in the European Convention on Human Rights.

“It is incomprehensible and unexplainable why that request has not been made unless the Irish Government is saying its protection of British spies in Ireland takes priority over the wish of these people for answers and justice,” said Murphy.

“We have more than enough political policing in this State already without allowing British agents to have a free run here too.”

The Dublin South-West TD said those affected are now seeking answers and justice. Mark Kennedy was not just one bad apple. He was part of a system of political policing and abuse of rights. As well as him, we know of at least three other undercover British police officers who operated in this State – Jim Boyling, Mark Jenners and John Dines. There are a huge number of unanswered questions here.

He said the Minister for Justice and Equality Frances Fitzgerald had already confirmed that gardaí were aware of Mark Kennedy’s presence in Ireland.

Murphy asked the Taoiseach on what basis and on whose authority did he have permission to operate in Ireland and questioned if the government knew of other undercover officers.

He claimed that there have been 56 convictions or prosecutions overturned in Britain as a result of Kennedy’s involvement.

The deputy called for the report commissioned in 2011 by the Garda Commissioner into Kennedy’s activities to be published.

The Taoiseach confirmed to Murphy that the Minister for Foreign Affairs and Trade Charlie Flanagan will meet with the Northern Ireland Secretary of State, James Brokenshire in Dublin next week to discuss the matter.

However, he said the minister has not seen the garda report which investigated the relevant and related issues. The security forces here would be very concerned about agents from another country operating in this jurisdiction. We have had incidents of that in the past.

Kenny said the minister will make a further statement following that meeting.