Two men have been arrested. 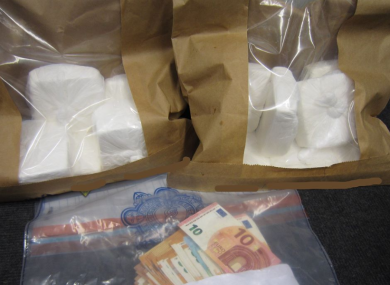 GARDAÍ HAVE SEIZED an estimated €280,000 worth of cocaine after stopping a car on the M7 and conducting a secondary search at a house in Kildare today.

Gardaí say that a divisional drugs unit stopped and searched a car on the M7 near Portlaoise at about 8.25 am.

An estimated €35,000 worth of cocaine was discovered in the car and the driver, a man in his 40s, was arrested. He is currently being held in Birr Garda Station.

A follow up search was then carried out at a house in Kill, Co. Kildare in which gardaí discovered a significantly larger quantity of cocaine. Approximately 3.5kg of the drug valued at €245,000 was found in a cabin in the property.

Gardaí say they suspect the cabin was being used used as a location to mix and package the drugs, with a press, scales and other ;drug paraphernalia also discovered.

Two vehicles and €3,500 in cash were also seized from the scene and a man in his 50s was arrested at the property.

That man was taken to Ronanstown Garda Station where he is still being detained.

Separately, gardaí Mayo and Longford made a number of significant seizures targeting the supply of drugs in the west of the country.

In a major operation in Ballina, a total of eight properties were searched from 9am this morning until 4pm this afternoon.

During the course of the operation, a cannabis grow house containing suspected cannabis plants valued at approximately €265,000 was discovered at a house in Attymass, Ballina. #Open journalism No news is bad news Support The Journal

An image of the grow house in Ballina. Source: An Garda Síochána

One man has been arrested in connection with this seizure and is currently detained at Ballina Garda Station.

In a number of other searches, €50,000 worth of cannabis herb and €18,000 worth of cocaine were discovered, as was a small quantity of ammunition.

A woman in her mid 30s was arrested following one of these searches but she was subsequently released without charge.

In Ballymahon in Longford, a cannabis grow house with plants valued at €130,000 was also discovered. A man in his 20s was arrested and is being held in Longford Garda Station.