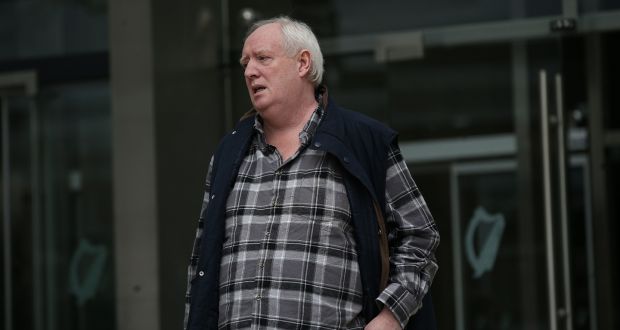 Patrick Russell was jailed for three years earlier this month for the theft of €215,000 from a businessman whom he was acting as an agent for in the purchase of a Co Kildare warehouse in 2015. Photograph: Collins Courts

Jailed former barrister Patrick Russell (57) conned people out of more than €12 million in a litany of frauds that began in his early 20s, senior Garda officers believe.

Dubliner Russell was jailed for three years earlier this month for the theft of €215,000 from a businessman, for whom he was acting as an agent in the purchase of a Co Kildare warehouse in 2015.

Russell, who featured in an expose by RTÉ Investigates, on Wednesday, took the businessman’s money and gave him documents to prove the building had been purchased for him. However, it later emerged the documents were forgeries and Russell had kept the man’s money.

The investigation into that theft was carried out by gardaí at Pearse Street Garda station in Dublin’s south inner city as the money was given to Russell in an office in Temple Bar in the area.

Russell was also previously involved in an attempted $30 million land deal in Antigua in the Caribbean with Tom McFeely, the former IRA man turned property developer

However, Russell’s many activities were investigated by gardaí under Operation Poach over a seven-year period, though the DPP directed he not face criminal charges. Garda sources familiar with Russell say evidence uncovered by gardaí over the years suggested he defrauded his victims of €12 million.

During many of his crimes he took large sums of money, in some cases close to €1 million, from people who he was acting for as a barrister or tax consultant. He then forged documents purporting to show the clients he had acted as an agent for them in settling with Revenue or buying assets for them. In reality, he had kept their money.

Russell (57), a former member of Sinn Féin with an address at Teach Daingain, Steelstown, Rathcoole, Co Dublin, also owned a Channel Islands company, Universal Management Consultants Ltd, with former taoiseach Albert Reynolds, and they tried to buy lands in north Dublin between 1997 and 2001.

Details of the failed transaction emerged at the planning tribunal in 2006, at which Russell represented Liam Lawlor, the former Fianna Fáil politician.

Russell was also previously involved in an attempted $30 million land deal in Antigua in the Caribbean with Tom McFeely, the former IRA man turned property developer, for which Russell planned to charge an €850,000 broker’s fee.

The convicted murderer Catherine Nevin tried to appeal her conviction on the basis that Russell, who gave evidence in the case, was a paid Garda informer and/or linked to the Provisional IRA. The allegation was dismissed by the court. She made the same allegation, dismissed by the courts, about three other witnesses who gave evidence for the State against her during her trial.

In 2010 Nevin tried to secure Garda documents relating to terrorism and paid informants and alleged they would show four men who gave evidence against her, including Russell, were paid Garda informers and/or linked to serious terrorist offences.

Catherine Nevin told him whenever he rang the pub he was to leave no message or only to do so under the false name of John Ferguson, which he did

She was appealing her 2000 conviction for the murder of her husband Tom Nevin (54), at Jack White’s Inn, near Brittas Bay, Co Wicklow, on March 19th, 1996. She was also convicted on three counts of soliciting three different men to kill her husband in 1989 and 1990, six years before his murder.

During her appeal in 2010 she claimed she had received new information about the men since they had given evidence against her and that the new facts made her conviction unsafe.

However, the Court of Criminal Appeal dismissed the attempt to have her conviction declared a miscarriage of justice, saying the allegations she had put forward were “vague” and what she claimed were newly discovered facts were all collateral matters.

During the murder trial Russell was presented as a “financial consultant” and said that he had ceased being a member of Sinn Féin in early 1989, but had begun to detach himself from the party in 1987. He explained he had known Tom and Catherine Nevin since 1984, when he was introduced to them when they ran a pub in Finglas and, as a university student, he ran a Sinn Féin advice centre there.

Russell told the trial Catherine Nevin, now deceased, contacted him to seek advice on tax matters in early 1996 when he “quasi-specialised” in tax settlements, having done many under the tax amnesty.

According to Russell, Catherine Nevin then told him “in the most strident terms” whenever he rang the pub he was to leave no message or only to do so under the false name of John Ferguson, which he did.

RTÉ Investigates former barrister Patrick Russell, a prolific fraudster who conned millions of euro, from scores of clients across the country.

The programme spoke to more than 60 men and women from all over Ireland who were conned by Patrick Russell over three decades.

Russell, a former Sinn Fein activist, rose through the establishment. A business partner of Albert Reynolds from the mid 1990s, they were involved in property and business dealings in Britain and Ireland including a failed attempt to buy a Swiss Bank.

Through the 1990s, Patrick Russell gained a reputation as a man who didn’t pay his debts. A taxi driver from Wicklow, a shop fitter from Meath, a drinks company, two banks, a builder, the Revenue Commissioners all took Russell to court to try to force him to pay a combined sum of around €800,000.

In 2001 Patrick Russell qualified as a barrister. He exploited the prestige his position gave him to con people.

· He defrauded two well-known musicians of close to €1.5m

Eleven years after he qualified Russell became the first barrister in the history of the state to be disbarred. He was disbarred for “professional misconduct.” According to the decision of the Kings Inns he had “lied” to a client and engaged in continued “deception”.

But he managed to evade criminal prosecution for a long time. RTÉ Investigates spoke to more than 20 victims who say they reported Russell to Gardai over the years.

Russell’s luck finally ran out. He appeared before the courts in June 2018 and pleaded guilty to a charge of the theft of €215,000 from a Kildare trucker, Paul O’Connell. It was his first conviction for theft. On November 4th last, he was sentenced to four years in prison, with the final year suspended.