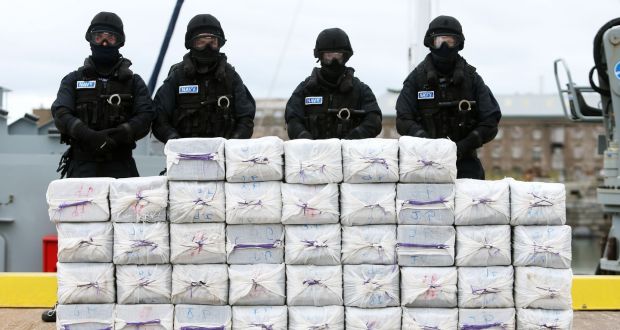 Members of the Irish Navy standing behind 1,025 kgs of cocaine worth €290 million discovered on board the Makayabella off the Cork coast in September, 2014. File Photograph: Brian Lawless/PA Wire

Coastal and lakeside communities in Sligo and Leitrim have been asked by the Garda Síochána to help them tackle crime along waterways, following a successful drugs seizure

Operation Dualgas will not exclusively target drug smuggling, but it follows successful searches of islands around Lough Gill on the border of both counties recently that uncovered nearly €250,000 worth of drugs.

Saying that gardaí are reviewing where criminal threats exist, Chief Supt Aidan Glacken said the new drive would target everything from drugs to the theft of boat engines.

Operation Dualgas is part of the broader Coastal Watch strategy, aiming to work with communities in gathering intelligence about suspicious activity.

Extra patrols will be put in place to identify routes used by criminals. Drugs will be one target, although historically, the bulk of large seizures off the Irish coastline have been concentrated in the south.

In west Cork last year, Chief Supt Con Cadogan said farming groups, communities and fishermen could all ensure the coastline was not used for drug importation.

It is also looking inward to rivers and lakes to counter boat and engine theft, and property damage. Human trafficking has also been identified as a concern.

By working with State agencies, local communities, who suffer when amenities are abused, can help “to collectively detect and prevent criminality” on land and water, Chief Supt Glacken said.

Andrew Ryan, Revenue’s maritime operations manager said it works closely with gardaí to “deter and detect the smuggling of drugs, cigarettes and tobacco and other prohibitions and restrictions”.

A boarding party from the navy ship LÉ Niamh discovered 1,025 kgs of cocaine worth €290 million on board the Makayabella off the Cork coast.

Destined for the UK, it went down as one of the biggest seizures in the history of the State and followed a Joint Task Force operation with the Naval Service, Customs and the Garda.

The operation to track the vessel as it crossed the Atlantic from the Caribbean also involved the National Crime Agency and National Maritime Information Centre in the UK as well as French and Venezuelan authorities.

Three Britons were later jailed for their part in the plot and a fourth man was convicted of money laundering connected to the same investigation.

An Irish sailing enthusiast later bought the Makayabella at auction for €70,000.

The yacht Dances with Waves was boarded 150 nautical miles southwest of Mizen Head off the Co Cork coastline in extreme weather conditions. The planned operation involved the seizure of over €400 million worth of cocaine in 74 bales weighing more than 1.5 tonnes.

In preparation for any such bad luck, the smugglers had a log book entry claiming they had discovered the drugs at sea but ultimately all three were convicted and sentenced to 10 years each in 2009.

They had bought the yacht in Trinidad and Tobago for €120,000 before sailing to Venezuala in South America to collect the drugs. Their destination was Caernarfon Bay in Wales.

Lieut Comm Martin Brett of the Irish Naval Service who received a commendation for his role in the seizure, later said the overwhelming quantity of 80 per cent pure cocaine represented 155 million lines by the time it would have been cut and sold on the street.

Englishman Martin Wanden (58) was found floating in the ocean next to 65 bales of cocaine worth €440 million at Dunlough Bay on the Mizen Peninsula in west Cork.

The drugs weighing 1.5 tonnes had been moved from the Lucky Day catamaran to a rib at a rendezvous about 50km off the coast. The cocaine was later found to be 75 per cent pure.

Things went askew because one of the rib’s engines had been filled with the wrong type of fuel causing it to flounder and sink in rough seas. Wanden was discovered by a lifeboat crew.

Customs and navy officers aboard the LÉ Ciara boarded the Posidonia, a converted trawler, uncovering an €18 million haul of cannabis resin. They brought the ship ashore at Schull in Cork.

The illicit cargo had been collected off Morocco and was due to be offloaded to a boat near the Irish coast where it would be brought ashore.

Skipper Richard Preece was jailed for nine years and two other crew, fellow Englishmen, Barry Court and Matthew Simkins were both jailed for seven years.

Six years later the ship was due to be completely overhauled as part of a Limerick project aimed at teaching new skills to teenagers from the city.

After a long transatlantic voyage, the 15m Gemeos arrived in Kinsale Harbour in Cork only to find itself at the unwanted end of a customs and garda inspection.

It was not in vain – officers uncovered 325kg of cocaine worth €61 million.

After a three-week trial at Cork Circuit Criminal Court, its captain, John O’Toole from Enniskerry, Co Wicklow, was jailed for 20 years. His companion, Englishman Michael Tune received 14 years in jail for his part.

The 75 per cent pure cocaine had been brought over from Panama in Central America, hidden under bunks, diesel tanks and behind a bulwark.

Much like the Gemeos two years later, the fate of the Sea Mist was sealed once she put into harbour, this time in Cork.

When she was searched, customs officers found 599kg of cocaine worth €125 million.

The converted trawler had missed its rendezvous with a yacht 100 miles west of Brest.

Local suspicions were aroused when she moored at East Ferry and customs, gardaí and the naval service were alerted.

Although all five crew went on trial, only its skipper Gordon Richards was convicted. He was jailed for 17 years.