Alan Wilson was secretly recorded by gardaí discussing a plot to murder Gary Hanley, as part of an “ongoing feud”. 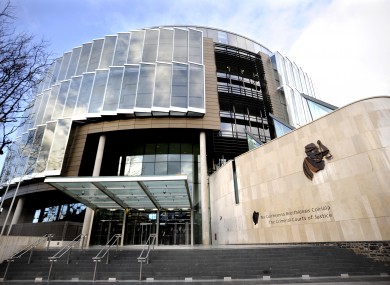 GANGLAND CRIMINAL ALAN Wilson, who conspired with his fellow gunmen to assassinate Dublin man Gary Hanley, is “very fortunate” that the maximum sentence for the offence is 10 years, a judge has noted.

Wilson, who was secretly recorded by gardaí in discussions about the murder plot, was today jailed by the Special Criminal Court for six years.

The father-of-four instructed his co-accused Joseph Kelly in an audio recording to “go and do what you have to do” to kill Hanley.

Heroin addict Kelly, who was recorded saying “if this fella survives we get no pay” and “hit him in the chest or something first” was sentenced to 12 years in prison at the same hearing today.

Kelly was jailed for six years for conspiring to murder Hanley and 12 years for possession of a firearm with intent to endanger life. His sentences are to run concurrently and were backdated to when he first went into custody.

Alan Wilson (40) of New Street Gardens, Dublin 8 and Joseph Kelly (39) of Kilworth Road, Drimnagh, Dublin 12 previously admitted to conspiring with Luke Wilson and other persons to murder Gary Hanley at a location within the State between 15 September and 6 November 2017, both dates inclusive.

This offence is contrary to Section 71 of the Criminal Justice Act 2006 and the maximum sentence that can be imposed upon conviction for conspiracy is ten years in prison.

At a sentence hearing earlier this month, James Dwyer SC for Wilson informed the three-judge court that there were “logistical difficulties” in having the two men together in court so it was decided to deal with each man’s case separately.

The judge said Wilson had issued instructions to his co-accused, Kelly and Luke Wilson in regards to the destruction of the cars as well as the method by which Hanley was to be murdered.

Having regard to the gravity of the offence, the judge said the court had to consider a number of relevant factors, which included the nature and extent of the conspiracy in question. “This was a widely-drawn conspiracy of a very serious nature,” he said adding that Wilson’s contribution, which was “knowledgeable and intentional” had taken place over a long period of time.

The offence contemplated was the most serious in the criminal calendar and Wilson had played a “serious role on a constant basis” in preparation for this crime, he added.

Referring to Wilson, the judge noted that the conspiracy involved an “intricate” plan to kill in the context of an “ongoing feud” and the defendant had been prepared to carry out the role for financial gain.

This offence fell short of “the maximum point of harm” intended by the conspirators due to intervention by gardai rather than “any restraint or lack of commitment” on the part of the accused, said the judge.

The headline sentence was eight years but there was a limited number of mitigating factors with the most significant being his early guilty plea, he continued.

The court heard that other mitigating factors were Wilson’s “effective absence” of previous convictions and his expression of remorse. The judge said he would reduce the headline sentence by two years because of these factors.

Wilson had penned a letter of apology which was handed into the court at his sentence hearing. It read: I apologise unreservedly for my actions and to all those that my actions have affected. I regret aiding the gang and should have known better. I was blinded at time regarding the ramifications that a gang would have and truly regret the course of my actions.

Wilson was sentenced to six years imprisonment, backdated to 6 November 2017 when he went into custody.

In summary, Mr Justice Hunt said he would like to compliment the gardai on their excellent work which had prevented “another execution-type murder” and noted that Wilson was “very fortunate” that statute had placed a limitation on this offence.