The problem is one that’s been raised consistently by outreach workers. 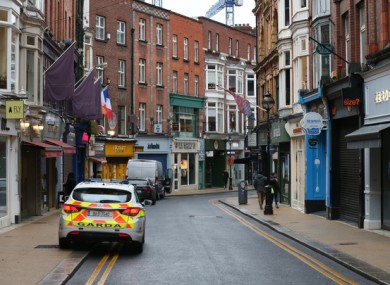 EMPTY CITY STREETS are a feature of the pandemic that never seem normal even if they have become the norm.

Drive or walk through Dublin right now and things feel particularly stark, with many of the shuttered shops suffering the effects of persistent closure over the last few months.

The near deserted city has also led to various reports of increased anti-social behaviour, but whether this is indeed the case or just a symptom of greater visibility is uncertain.

In a statement to TheJournal.ie, gardaí said that Public Order Offences were up 6% during 2020 and that this reflects “significant enforcement of Covid-19 regulations”.

There were also “significant increases” in detection under drugs legislation including simple possession up 12% and possession of drugs for sale and supply up 19%.

The circumstances around this week’s violent mugging in the IFSC may be unclear at present, but the incident has been raised as an example of the need for an even greater policing presence.

Even aside from this incident, community outreach workers have been saying that empty streets are a problem that they have been persistently raising.

CEO of the Mendicity Institution Louisa Santoro told TheJournal.ie that services for vulnerable people are already limited and have become even more stretched.  There’s really no one around and we we have had quite a number of instances of people being beaten up. To the point where Covid-19 isn’t the top of their list in terms of threat. It is a risk but the reality of sleeping outside and coming to some harm from somebody else is much more common.

Santoro explains that people sleeping rough have been moving much further outside the city and beyond the usual canal line. This pushes them even further away from services like food or healthcare they may require.

Two people who had been sleeping rough in Phoenix Park died over Christmas and over 50 deaths have been recorded in the city over the past year.

The obvious issue of begging becoming less of an option for people also gives them less of a reason to stay in the city. Begging at cars stopped at traffic lights has become a much more common feature in Dublin, with fewer people walking around that may donate.

“At the moment, even if you were considering it, if you were sitting down with a cup and you were prepared to do that, you rely on footfall,” Santoro says. At the moment the city is deserted, there’s no retail, diners or revellers, nothing at all.

Each outreach worker who spoke to TheJournal.ie about the current situation praised the work of the gardaí, pointing out that they have a particularly demanding role in managing Covid-safe behaviours as well as policing.

An Garda Síochána says that there are two separate an ongoing operations “specifically focus on addressing anti-social behaviour and drug dealing”. These are ‘Operation Spire’ in the north inner city and ‘Operation Pier’ in the south inner city.

22.01.21 Explainer: Why is mandatory quarantine being debated again and what are other countries doing? 22.01.21 How does this week’s Covid-19 data compare to last week’s?

Gardaí say these operations “involve a collaborative effort of uniform, plain clothes and specialist personnel being deployed overtly and covertly”.

The force says its operations also include “planned days of action, intelligence-led surveillance operations and planned checkpoints and patrols”.

Tony Duffin of the Ana Liffey Drug Project says that from his point of view there hasn’t been an increase in anti-social behaviour but that there is a greater challenge in engaging with people.

“Covid makes it difficult for everybody, including outreach teams, to deliver services in a safe fashion. You’ve got to encourage people to wear masks, obviously hand-washing and cough etiquette are tools of the trade right now.  But agencies are out doing that work throughout the pandemic. There’s a lot of great work going on in the city but depending on where you are in the city you may see antisocial behaviour, but that’s not because guards aren’t doing the job, they are, it’s just a big challenge.

What Duffin stresses is that may of the issues currently being faced by people in the city are also present in so-called normal times.

Councillor Mannix Flynn agrees and says this is the case for both vulnerable people and those going about their daily lives.

“I just think with the anti-social behaviour issue the problem is a lack of any kind of response. This has been an ongoing issue,” he says.  The point of the matter as far as I would be concerned is that the city in general is not well managed when it comes to people’s safety. That is the safety of those who are going about their lawful business, and also those who are going about in their own vulnerable ways like sleeping rough.

Flynn pointed to the recent RTÉ Investigates programme which spoke to some of those living on the streets of Dublin and the sense of fear they lived under.

He added that some areas of the city that have seen changes to road layouts have resulted in less passing traffic and a sense of “foreboding” because they are now empty.