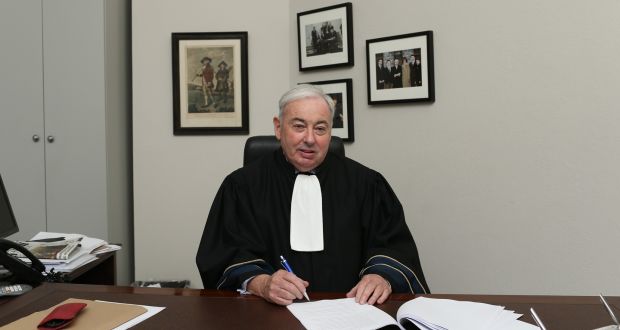 Mr Justice Paul Gilligan in his chambers on his final day as a Court of Appeal Judge. Photograph: Collins

The Attorney General and the President of the High Court led warm tributes to Mr Justice Paul Gilligan on his retirement on Wednesday.

The judge steps down after a 47-year law career, involving service as a judge of the Court of Appeal and the High Court over 15 years.

He was for several years in charge of the High Court’s busy chancery division where he dealt with many high-profile cases including over the occupation of Apollo House. He heard over two years the lead action concerning pyrite damage to homes and also heard multiple claims against the State by the McBrearty family in Co Donegal. In 2012, he was elected President of the European Network of Councils for the Judiciary and assisted judges in Bosnia-Herzegovina in setting up a judicial council which had proven difficult following the Dayton Accord which ended the war in the former Yugoslav Republic.

During his career as a barrister, he represented the late taoiseach, Charles Haughey, at the McCracken tribunal and other clients included broadcaster Gay Byrne, RTÉ and the Irish Press newspaper.

Leading the tributes in a packed Court of Appeal, the president of the High Court, Mr Justice Peter Kelly praised Mr Justice Gilligan as being “a credit to judges generally” especially for his handling of the difficult chancery list during recession, and post-recession, Ireland.

He had dealt with difficult cases and at times was subject of abuse no judge should have to endure, Mr Justice Kelly said.

Mr Justice Gilligan’s handling of the Apollo House occupation had earned him the “rarest of accolades”, praise from the media “for having an imagination and for using it”.

The Attorney General, Seamus Woulfe SC, said Mr Justice Gilligan’s handling of the chancery list was a reminder, “in these days of competing outrage,” of the importance of observing the fundamental principles of fairness and waiting to hear from the other side.

The Chairman of the Bar Council, Paul McGarry SC. said the judge was a “classic example” of what a judge should be.

In reply, Mr Justice Gilligan thanked his wife, their family, High Court registrar Paula Healy and all those who supported him during his career. He also thanked Ian Barclay, his usher for many years, describing him as “the best project manager I have ever encountered.”