Stephen Donnelly said that misinformation “has been a problem from the outset” of the pandemic. 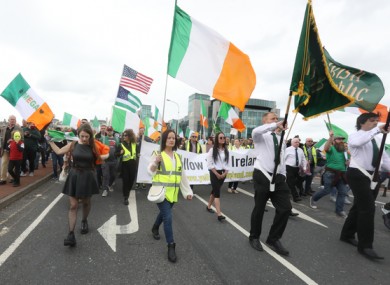 IT IS “DEEPLY concerning” to see campaigns that threaten to erode trust and confidence in public health, the Health Minister has said, following a large protest against coronavirus restrictions in Dublin this afternoon.

Hundreds gathered in Dublin city centre today in protest against Covid-19 public health measures and the wearing of face coverings.

Responding to TheJournal.ie, Health Minister Stephen Donnelly said: “In this global struggle, where all of us are taking unprecedented steps to limit the damage done by Covid-19, it’s deeply concerning to see any campaigns that threaten to erode trust and confidence in public health.”

Donnelly said that misinformation “has been a problem from the outset” of the pandemic.

“The only way to suppress this virus is to follow the advice from our public health doctors, which is based on facts and evidence.”

Members of the protest group gathered on Custom House Quay at 1pm today and proceeded from there to Government Buildings. The group also stopped at TheJournal.ie offices.

The protests caused some road closures throughout the afternoon with delays on Dame Street and George’s Street.

Gardaí said there have been no reports of any incidents or arrests related to today’s protest.

They said the demonstration has since ended and there are no traffic delays in the city centre at the moment.

Sinn Féin TD Eoin Ó Broin commented on a Tweet which showed a woman who had sustained injuries during an incident at the protest.

The TD said: “These people aren’t patriots. They are thugs. Connolly & Pearse would be turning in their grave.”

Elsewhere in Dublin, approximately 200 people gathered for an anti-racism protest on O’Connell Street this afternoon.

Most protesters wore face coverings and appeared to maintain a physical distance from each other. 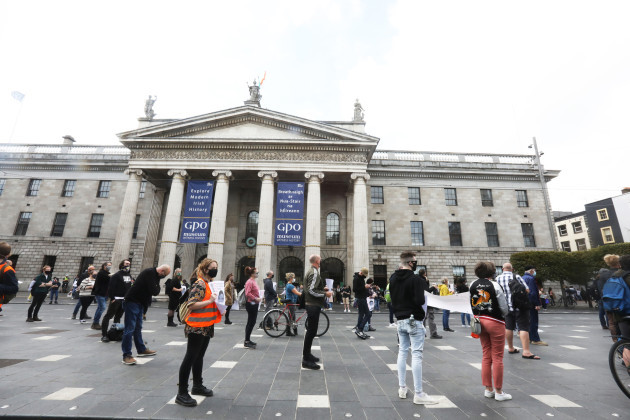